Love is in the air as tennis returns to Kilkenny again 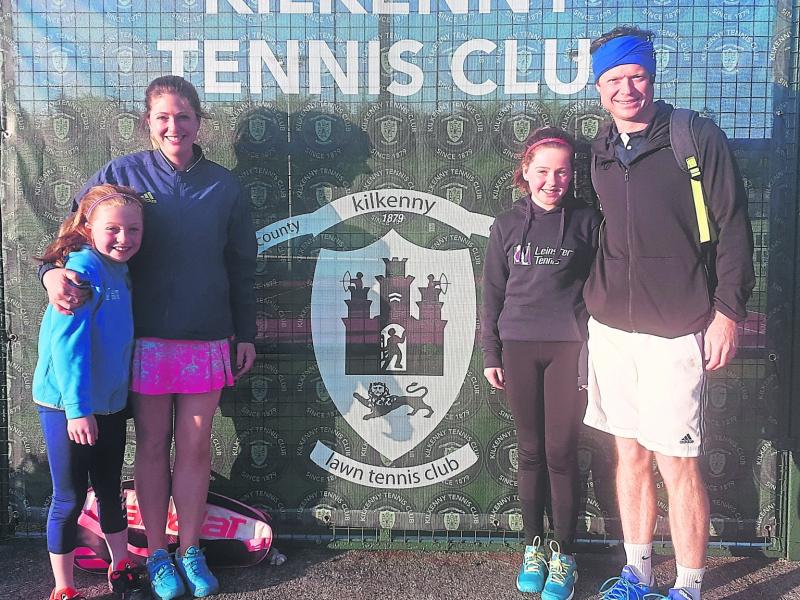 The Cotter Family were among the early players who flocked to Kilkenny Tennis Club to play a game of family doubles. The club courts were busy from 7am on Monday as players made a return to action

After 117 days of lockdown, it was with great excitement that the keys to the front gate of Kilkenny Tennis Club were turned in the lock, heralding a return to action.

Excitement was in the air on Monday as the club, which boasts approximately 1,000 players, resumed activities.

With a national Level 5 lockdown resulting in tennis rackets being put into storage in houses and sheds over the months of January, February and March, they were swishing back into action as the first players to hit a yellow ball in over 100 days took to the green astro tennis courts at Archersfield.

With tennis players from across the county of Kilkenny emerging from hibernation, by 7am all eight courts at the club were active again on Monday.

Sixteen early birds took to the courts. Among them was Tommy Rochford snr, one of the oldest members of the club, who said he was ‘delighted to be back hitting a ball again’.

The gentle ping of a tennis ball being struck had been missing from the air at Archersfield for over three months, so it was a great pleasure to see members return with smiles on their faces as they were back playing their beloved game.

Ivan Powell, captain of Kilkenny Tennis Club, was there at dawn to welcome the members back, with the keys in his hand.

“We have waited for over 117 days for the return of tennis and it is a great joy to see our members return,” he said. “We have players from aged from five to 80 and, as you can see, their enthusiasm for the game is as strong as ever.

“They have turned up at the first opportunity to play the beloved game,” added Ivan, who became club captain in the midst of the pandemic in 2020.

Also present at 7am was Paul Cotter from the Junior Committee, who gave a particular welcome to the younger members of the club.

“These members are the present and the future of our great club and they bring great energy to Archersfield,” he said. “As you can see they have captured the fun element of tennis, and the laughter and enjoyment emanating from them at this early hour of the morning is palpable and gives us great hope coming into the summer months.”

Paul marked the return by playing a game of doubles with his wife and their two younger daughters. Singles games are permitted as are doubles matches where the pairings are from the same household.

One such young player, nine-year-old Jenny Trimble, stated that she and her friends were excited to be back playing tennis.

“While I have played on my driveway, garden and footpath outside my house over the past few months, nothing is better than playing on a proper court with nets,” she said.

“The bonus is that I have managed to meet a few of my friends and have a socially distanced chat across a net, all at the same time as playing the game I love.”

That sentiment was echoed by more.

“It’s just brilliant to be back up here again,” said another young player.

There have made many improvements in recent weeks to the appearance of the club with a new boundary netting, painting and some much-needed maintenance. This has given a lift to the club’s appearance and setting as members re-emerged.

While Government and Tennis Ireland regulations about Covid protocols are in operation and will restrict the club a little in running competitions, it won’t dampen the enthusiasm for the game.

As normality comes back to the game of tennis it also returns with the added value that the game brings.

Much chat and laugher took place on Monday morning, even at such an early hour.

Many players running around serving, playing volleys, drop shots, ground shots and overhead shots - some accurate, and some less so - but members were back playing a game that thrives on keeping people active in sport.

As the sun came up, it was great to see members having fun and enjoying life with a little yellow ball and a racket that have finally come out from a winter of hibernation.

The dreams of the many players have been rekindled.

Words that have not been uttered on court for over three months: ‘love all’, ‘your serve’, ‘good shot’, ‘deuce’ and ‘advantage’ are back in sport’s vocabulary.