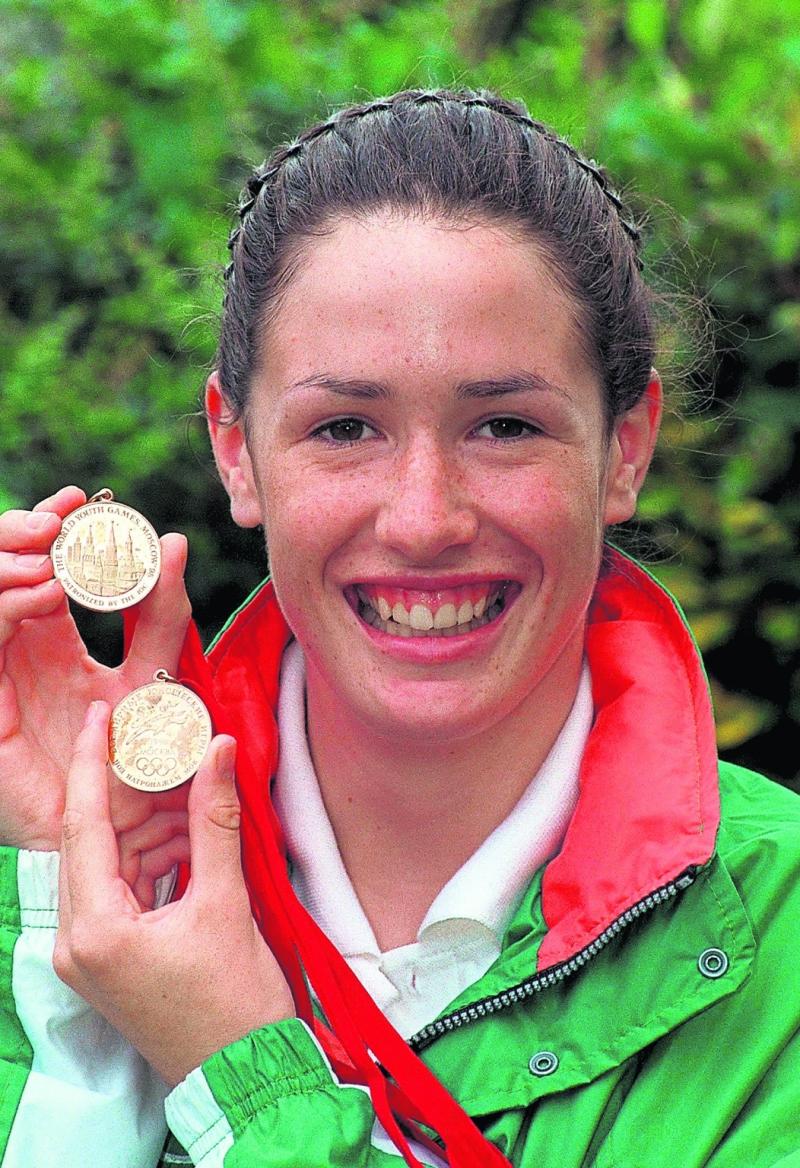 Irish athlete Emily Maher with her two gold medals from the World Youth Olympics which were held in Moscow, at her home in Kilkenny Picture: Brendan Moran/Sportsfile

The spotlight of the sporting world turned on Kilkenny this week.

Thanks to a remarkable 17 year old, the county is basking in Olympic glory.

Today, we salute a marvellous sporting wonder who has struck gold on the double. As well as doing her country proud, Emily Maher’s amazing rise to stardom has catapulted Kilkenny athletics on to a world stage.

The Hugginstown heroine, a member of Kilkenny City Harriers, brushed aside all opposition at the inaugural World Youth Olympics in Moscow.

Last Wednesday, at approximately 3.20pm (Irish time), history was made when she inscribed her name on the world athletics roll of honour.

Maher burst on the international athletics scene in a manner which captured the heart of every Irish person and, even more so, every Kilkenny man, woman and child.

Having achieved the fastest times in both qualifying heats for the 100 metres she notched up a time of 11.92 seconds in the final.

She blew away the world’s top sprinters from the USA, Brazil, France and four other countries.

There followed a slight delay before she received her medal. The reason? The organisers had to dig deep in the vaults to find a recording of the National Anthem.

Emily cried throughout the ceremony and her heart pounded so fast she thought it would explode.

Her feelings turned towards her native Hugginstown, her friends, her family and all who had made her dream come true.

A student at St Brigid’s Convent Secondary School in Callan, she has been inundated with messages of congratulations.

A busload of supporters from Hugginstown joined dignitaries at Dublin airport or Monday for the homecoming. Emily’s flight from Moscow was delayed for two hours.

Having attended a gala ball for the athletes in the Kremlin she had only two hours’ sleep before the flight. However, once she met her mother and the rest of the family, she blossomed. 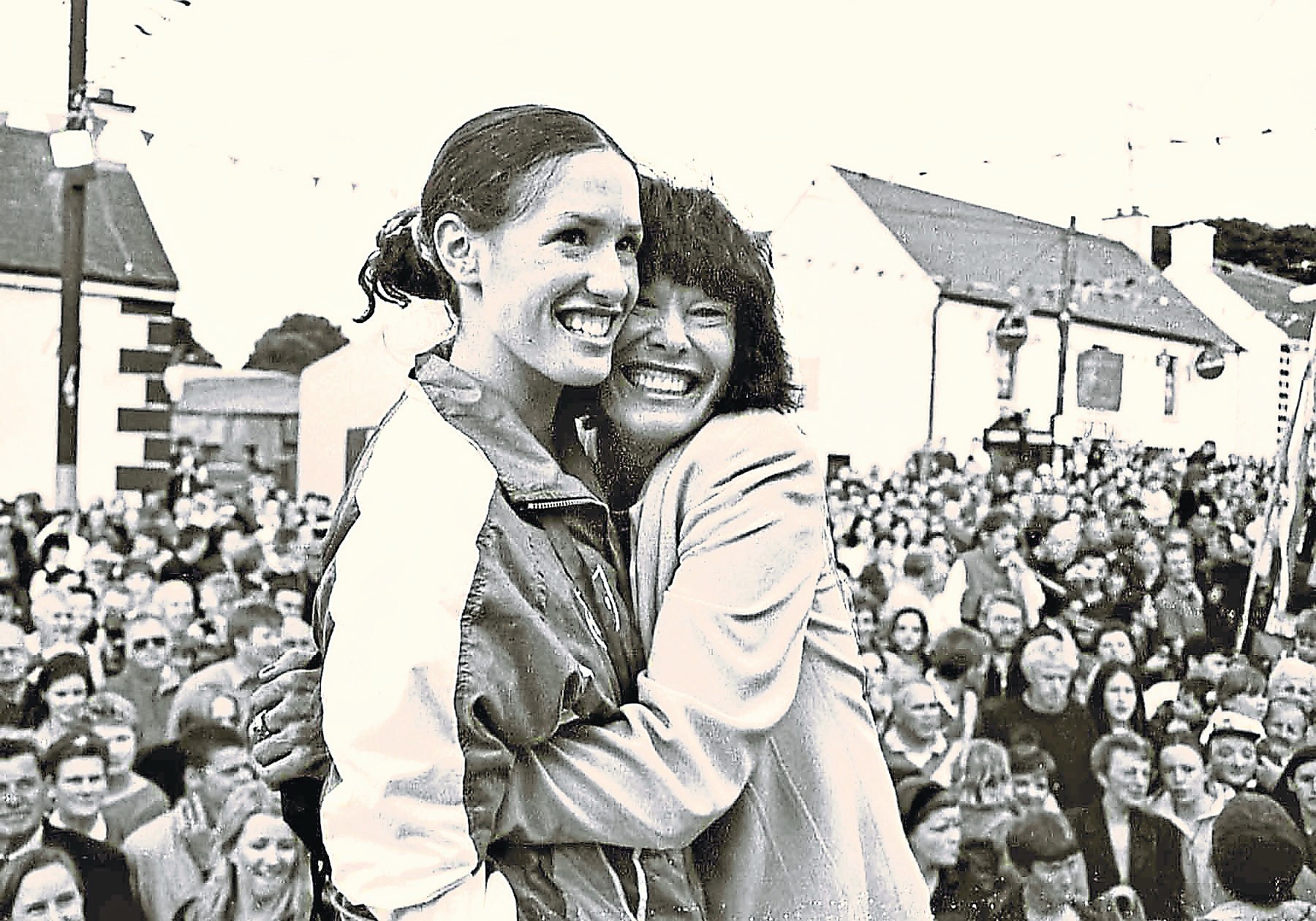 The Kilkenny People/Hotel Kilkenny Sports Star of the month award for February was completely unprepared for the reception that awaited her in her native Hugginstown.

A delirious crowd went wild when she appeared on an open truck at the top of the village.

The mother of all parties followed and the three pubs in the village were full with revellers.

Emily will have little time for celebrating. She will train this week in advance of her next assignment. She travels to France for the World Junior Championships next Monday.

There, she will be up against competitors who are two years older than her, some of whom have been training professionally for the last two years. Emily is realistic about the future. She dismisses talk of taking the Sydney Olympics by storm. “I would be hoping to make one of the relay teams for Sydney,” she modestly said.

Those sentiments were echoed by her level headed coach, Robbie Norwood. “People should not expect too much from Emily over the next few years.”

“Having attained this high level,” he said, “let us hope that she will be allowed to blossom at her own pace.”

Her coach praised his charge for her dedication, ability to listen and her ability.

He said that Emily was an example to all young athletes to what could be achieved.

The future looks promising. She is undefeated over the last six years in Ireland among her own age group.

Maher Made for Gold

On Wednesday afternoon at approximately 3.20pm Irish time, history was created. A young and wonderful Kilkenny athlete took the world by storm.

Running in the Russian capital of Moscow, 17-year-old Emily Maher from Hugginstown burst on to the international athletics scene in the twinkling of an eye.

Having achieved the fastest two times in both qualifying heats for the 100 metres, the Kilkenny City Harriers runner notched up a time of 11.92 seconds in the final.

She beat the world's top sprinters from Brazil, USA, France and four other countries.

It was a breathtaking display and one that was well deserved.

Suddenly she was swamped by the media anxious to find out all about this great young woman.

There was a slight delay before she received her medal as the organisers had trouble finding the Republic's National Anthem.

Emily cried throughout the ceremony but she enjoyed every minute of it, she told the Kilkenny People.

The following day she competed in the 200 metre sprint.

She was again the fastest qualifier and went on to compete in the final.

Coach, Robbie Norwood, feared that she would be drained because of the number of races she was forced to run in such a short space of time.

Emily showed great composure and speed as she sprinted clear of her rivals to win the 200 metres in a time of 24.17 seconds - a personal best for her.

Her feelings during those emotive moments turned towards her native Hugginstown, her mother Frances, sisters Pamela and Frankie and brother John.

A pupil of St Brigid's College, Callan, she has also brought great credit to her school.

When she returns to school in September she will begin studying for her Leaving Cert. But first there is the little matter of celebrating.

Homecoming was a triumph

Kilkenny Cats turned out in their thousands to salute a world top cat.

There was an outpouring of joy as double Olympian, Emily Maher, made her way home on Monday night.

The village of Hugginstown erupted in unrestrained joy as the gold medal winner made her way through her native village preceded by St Patrick’s brass and reed band and followed by hundreds of children.

She had to choke back the tears as she was greeted by friends and family among the thousands of well-wishers who descended on the village.

The green and gold colours of the local Carrickshock GAA club were everywhere and the country’s media visited Hugginstown for the first time.

On stage, Maurice Power noted that it had been 10 years since Emily came home in triumph to Hugginstown from the Community Games in Mosney. The tributes flowed as everybody who contributed to Emily’s success had their say. Her first coach, Mary Farrell always knew that Emily would make it.

In a short dignified address she said that she was happy to have played a small role in nurturing Emily’s talent.
There was also praise for the man who started athletics in the village, Pat Cody.

Another local resident, Liam Aylward TD, was praised by nearly every speaker for having the foresight in allocating the money for Scanlon Park in Kilkenny City when he was Minister for Sport.

On stage, he presented Emily with the first medal won by Kilkenny Olympian, Maeve Kyle (nee Shankey) whose father was principal of Kilkenny College many years ago.

Michael Whelan and his company SRS (Steel Roof Systems) Castlecomer were held out as examples of local industry who had helped Emily out. A number of other speakers asked that other industries in Kilkenny should sponsor individual athletes in the region.

Mr Whelan said he and his wife, Annette, were delighted to have helped Emily.

Those involved in the GAA club, camogie club and other local organisations who held cabarets and other functions to raise money for Emily were also mentioned.

An emotional Frances Maher, Emily’s mother, was stuck for words on the podium and just thanked everyone who contributed to Emily’s success.

Emily, who had just two hours sleep in two days, was thrilled with the turn-out and waved at everybody.

Emily thanked everybody who helped her achieve her goal, especially her mother Frances, her coaches, her family, her sponsor, Michael Whelan and the community of Hugginstown.

It was a testimony to her popularity that so many of the team that went to Moscow with her had travelled to Hugginstown for the festivities.

A Kilkenny-born sprinter is thrilled with Emily Maher's success.

Maeve Kyle, who grew up in Kilkenny and is now coaching in Northern Ireland, has decided to give one of her most valued possessions to Emily - the first medal she ever won as a 10 year old when living in the city.

A three-time Olympian, Maeve competed in the Melbourne games in 1956, the Rome Olympics in 1960 and was an Olympic semi-finalist in the 400 metres and 800 metres in Tokyo in 1964. She also won many national championships in a great career.