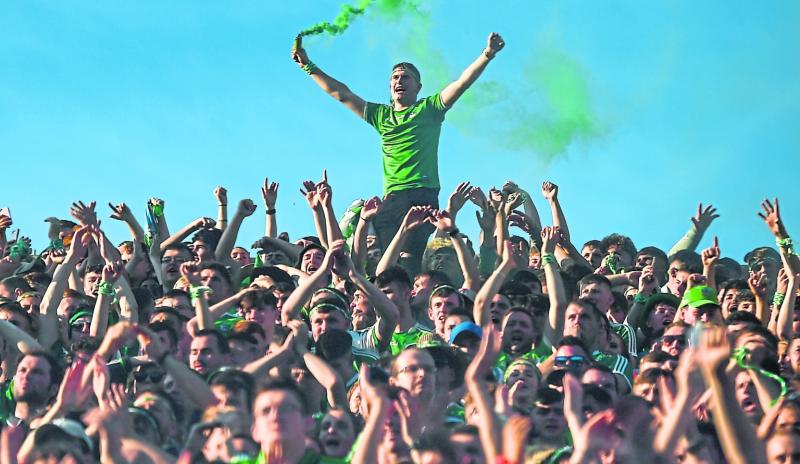 Limerick fans during the 2019 All-Ireland Senior Championship Semi-Final between Kilkenny and Limerick at Croke Park in Dublin. Picture: David Fitzgerald/Sportsfile

The world may have changed incredibly over the past 12 months, but some things remain the same - and that includes the desire every hurling fan has - to see their county lift the Liam MacCarthy Cup.

Though 2020 and the coronavirus delivered a year when crowds were locked out on match days, throughout the pandemic’s darkest days the appetite for top class hurling never waned. We shouldn’t be surprised at that.

When things have been at their toughest over the years, sport has been the common ground for many to forget their woes and focus on something which stirs the soul and fires up the passion. And it goes without saying that Gaelic Games are right at the heart of things.

Whether it’s a kid in the city, or youngster in a village in the middle of the countryside, the dream of playing for your county, to get the chance to run out at Croke Park on All-Ireland final Sunday, is something that has driven many a budding All-Star on during those winter nights training on cold and wet pitches.

Getting that opportunity falls to a select few.

For the rest of us mere mortals, we have to settle for watching our county’s best strive for victory.

And the excitement of watching our heroes in action is matched by getting the chance to look back on those days of glory, or pore over the post-mortem of where it all went wrong, in the local paper.

We in the Iconic group have been privileged to cover many All-Ireland finals over the years, on good days and bad.

For some of us, the run has included some special teams. From the days of the revival of Tipperary in the 1980s - who could forget Richie Stakelum’s “The Famine Is Over” speech from Killarney in 1987 - to the Richie Bennis-inspired Limerick who helped a county dare to dream, we have been fortunate to have a front seat in the rollercoaster that is the senior hurling championship.

It goes without saying that the game changed when a certain James Stephens man took charge at Nowlan Park. In a well-timed move, I joined the staff of the Kilkenny People in the summer of 1999 - just in time for Brian Cody’s first All-Ireland final appearance as a manager.

While that rainy day in September didn’t go Kilkenny’s way, there have been more ups than downs in the time since. No-one could have seen the grip the Cats would take on the game under their manager - in the 21 championship seasons he’s been in charge, Kilkenny have won a staggering 11 All-Ireland titles.

They’ve been beaten in five other finals and drawn two - which means that, in that time, I’ve covered the Cats in 18 finals. Not a bad record!

Cody’s tenure has also coincided with plenty of changes in the game. From superstars and sweeper systems to HawkEye and the yellow sliotar, it’s safe to say hurling has evolved.

And that’s not just onfield - the rise in nutrition and statisticians and growing numbers in the backroom team has elevated the game, and its players, to levels bordering on professionalism. And it has brought hurling into a new era.

From those days of Brian Cody’s all-conquering Kilkenny, a swift and powerful team who threw black and amber shackles on the game between 2006 and 2009, to the high-scoring Tipperary team who stopped the five in a row with some thrilling hurling, we have seen some incredible games - real battles of hurling titans.

And it’s not over yet.

Look at John Kiely’s Limerick side, a team who have changed how many watch the game (and indeed play it) with their speed and skill. There is a steely resolve to their play, something which has seen them take firm grip on the game (and opponents) and not let up until victory is achieved.

The Treaty men are the ones to chase again this year, their haul of League, Munster and All-Ireland crowns putting them as forerunners for more silverware in 2021 - but that won’t put the chasing pack off from giving their all.

The excitement that hurling brings is matched only by news of the championship draw. Ears are tuned to radio stations, eyes scan newspapers and social media feeds for those first morsels of information that tell us who we’re facing (and who we dodged along the way!) and, more importantly, when.

Once dates are announced the heartbeat quickens, almost as if our bodies begin the countdown to the big day of the first match.

That usually comes with the car trip to the match venue, the chance to meet up with friends for a prematch chat and the opportunity to drink in the atmosphere. Will that be a reality this year?

A crystal ball would be needed to provide that answer, but hopes are we will get to see some action inside stadia this season.

However, all is not lost if it turns out that games are to be played behind closed doors.

Again, the draw of television and newspapers will be there to help people get their fix before and after the final whistle has been blown.

I know the importance of the local newspaper. As a kid, I was lucky enough to grow up in a time when the Tipperary senior team came out of the hurling wilderness and, in a glorious spell, captured two All-Ireland titles, a League and four Munster crowns in a matter of years.

For a county which had been starved of success, it was a glorious time as Babs Keating brought the team to the top. It was great to be at a lot of those games, but it was better to be able to pick up the Nationalist and pore over the reports and pictures of players who quickly became heroes.

Many articles were clipped and kept in scrapbooks (does anyone still do this?) to be read and reread - clearly an indicator as to how I ended up getting into sports journalism.

Which brings us nicely to Over The Bar, our championship offering. A first for the group, we hope this supplement will capture some of the excitement we are anticipating will flow freely in the months ahead.

Although we may still be locked down in some form or another, our dreams run free with wild abandon. And when that sliotar is thrown for that first championship game, we are all equal - the chance to become hurling’s kings is there for all to chase.

If the race ends in glory? Wonderful. If not? We can always look to the future and dream again.

Enjoy the thrills and spills that lie ahead.