Busy summer of soccer as Cup and Shield draws are made 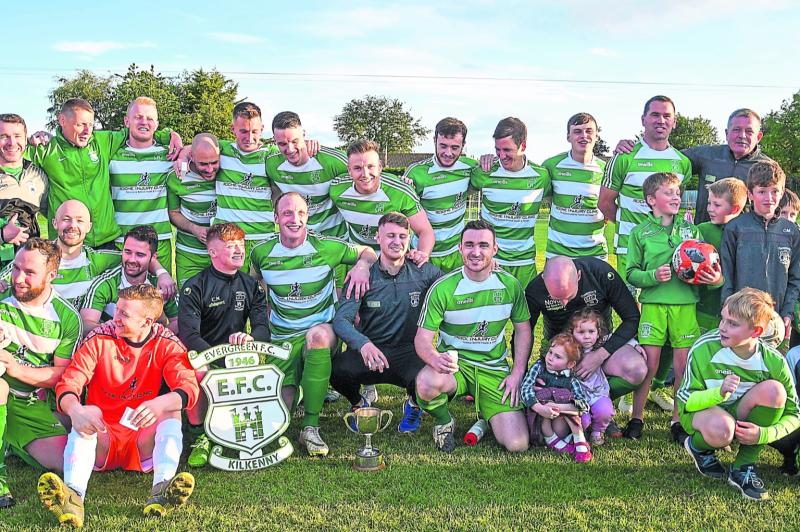 Evergreen will begin the defence of their McCalmont Cup title against Highview Athletic B. The city side won the title when they beat Fort Rangers in 2019 . Picture: Michael Brophy

The long-awaited return of junior soccer moved a step closer after the Kilkenny & District League announced dates for games in the McCalmont Cup and Maher Shield.

Following a discussion with junior clubs, the League made the decision to host games in Cup competitions across the summer before launching back into a full-scale season later in the year.

Soccer was just one sport that was hit by the coronavirus pandemic - not once, but twice. The 2019/20 season was halted around St Patrick’s Day last year when lockdown forced the League to postpone all competitions. With no safe return date forthcoming, the League had to scrap the remainder of the season.

With restrictions easing in autumn, hopes were high that the sport would be back in full swing by autumn.

The game made a welcome return with a new season in late August, but just as competitions started to get going another lockdown, coupled with recommendations from the FAI, forced the game back to the sidelines.

It means that, for the second season in a row, no league titles will be handed out but the return of the cups is a welcome consolation.

The action will resume with the quarter-finals of the Maher Shield on June 9 and 10 - almost nine months after games in the round of last 16 were played. The semi-finals will follow a week later, but the rounds will be split by the opening games in this season’s McCalmont Cup.

The competition, the blue riband event in Kilkenny soccer, gets up and running on June 13 when 30 teams take to the pitches.

The draw has presented some interesting ties - not least the clash of Freebooters C and Freebooters C - and the city derby between Ormonde Villa and Newpark B and the meeting of neighbours Spa United A and Clover United.

Evergreen A, the current holders of the title, will play Highview Athletic B in their first round game. Evergreen won the last Cup final to be played in 2019 -almost two years ago - when Sean Barcoe’s goal gave them a 1-0 win over Fort Rangers.

With a tight schedule in place all games will be decided on the night - extra-time and penalties will be used if needed. Clubs will also have to use last season’s panels. New players are not eligible.

Junior soccer will return in Kilkenny on June 9, when three of the four Maher Shield quarter-finals are played.

The meeting of Thomastown United and Evergreen at United Park should be a tasty affair, with the all-Premier Division meeting a fine way to resume Kilkenny & District League activities.

The Fair Green will also have an interesting tie as Freebooters A host Bridge United while Newpark, who hit River Rangers for nine when the sides made in the last 16 back in September, will be hoping for a similar result when they take on Fort Rangers.

The final quarter-final will be played on Thursday, June 10, when Freebooters B play Ormonde Villa in a city derby. All games will kick-off at 6.45pm.

There will be a quick turnaround for teams, with the semi-finals to be played on Wednesday, June 16.