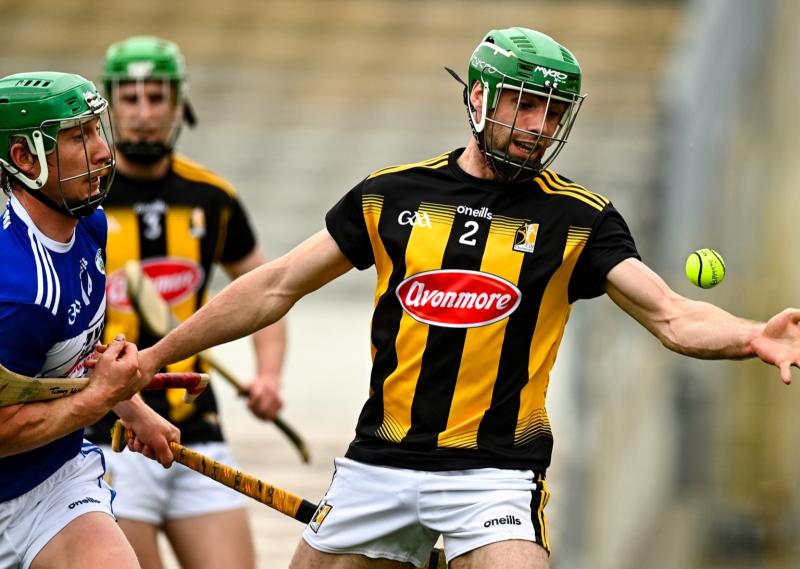 Tommy Walsh of Kilkenny in action against Ross King of Laois during the Allianz Hurling League Division 1 Group B Round 4 match at UPMC Nowlan Park. Picture: Eoin Noonan/Sportsfile

Kilkenny assured themselves of top spot in Division 1B of the Allianz National Hurling League after a ten point success over Laois at UPMC Nowlan Park.

Kilkenny were comprehensive winners on the scoreboard in the end but Laois were competitive throughout and gave trouble to the hosts on a number of occasions.

Kilkenny were quick out of the traps and after Laois hit four consecutive wides, the Cats hit four successive points and Cheddar Plunkett's team didn't trouble the scoreboard from play until the halfway point of the half.

In the end Brian Cody's team led by nine points at half-time with Liam Blanchfield taking advantage of his role in the team at full forward when he found the net in the 21st minute to help the Cats push clear.

Eoin Cody led the scoring for the much changed Cats as he took over the frees from the rested TJ Reid with eleven points throughout and the entire Kilkenny forward line got on the scoresheet over the course of the game.

Laois were much improved in the second half and got the deficit down to six at one stage and if it wasn't for Eoin Murphy saving a couple of attempts from top scorer PJ Scully the game could have been a lot closer.

Kilkenny finished well though with James Bergin who got five points in total, Martin Keoghan, Adrian Mullen, John Donnelly and Tadhg O'Dwyer all scoring late on to give a bit of shine to things from a Kilkenny perspective.

As a result of Saturday's action Kilkenny can't now  be caught at the top of Division 1B with one more league clash to come against Clare next Saturday.