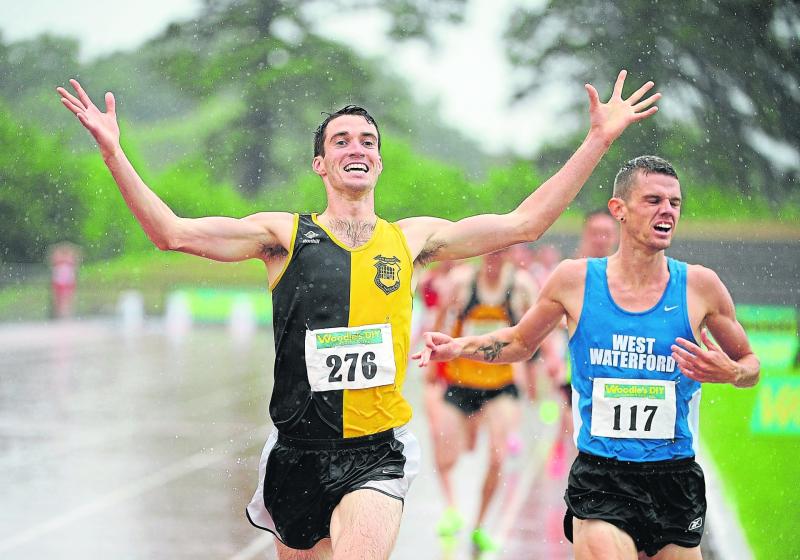 It was a rainy day in June when he stopped to chat, but the bad weather couldn’t wipe the smile off Eoin Everard’s face.
Everard, the first Kilkennyman to run the four-minute mile, wrote his name into the county’s athletics history books when he ran a sub-14 minute time for the 5k.
And, speaking in the aftermath of that memorable run in Manchester, he was still wearing a wide beam.
“I’m absolutely delighted,” he said, peering out at the rain from the shelter of the WaterShed as he reflected on his history-making run of 13 minutes and 58 seconds.
“I came second in the race and, when I saw the time of 13:58, I initially thought it was the winning time,” he said. “Then, when it clicked on to 13:59 I knew it was my time. I worked hard to break this time, so to achieve that goal gave me such a buzz.”
While he had already made history by becoming the first Kilkennyman to run a four minute mile, the rise in popularity of 5k runs means more people can relate to his latest achievement.
“People will know of the four-minute mile, but not many have run that distance,” he said. “However, with great events like the ParkRun or time trials almost everyone knows what their 5k times are.
“With the ParkRun the 5k distance has become so popular,” he added. “When people hear you’ve finished that distance in less than 14 minutes they can relate it to their own times.”
So how did the idea of breaking another record come about? For Everard, a change in running distance planted the seed...
“I’d moved from the 1,500m and mile disciplines a few years ago and I had it in my head that I’d love to run a sub-14 minute time for the 5k,” he said. “I contacted Emmet Dunleavy, who would be more of a distance coach for his help. I thought it would be a nice achievement to go with the four minute mile. 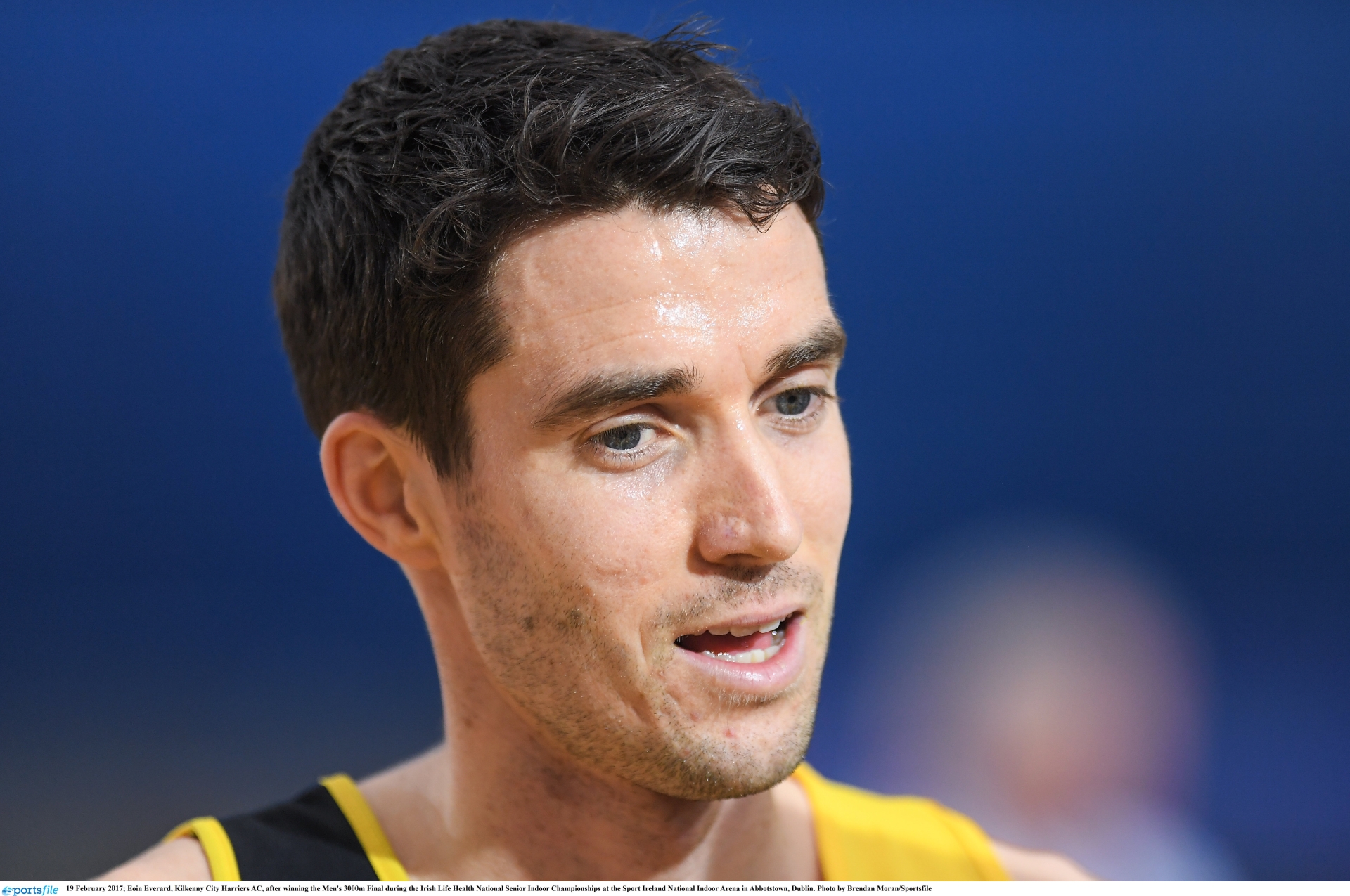 Everard has had plenty of success during his athletic career
“In the first year of trying I got very close,” he said. “While running in Belgium I crossed the line in a time of 14:00.1. I was delighted with the PB (personal best) but I was 33 at the time and wondered ‘would I get another chance?’.
Dug In
“It was a nice night in Belgium when I recorded that time, but I always remember thinking about the last 100m of the race - I’ve played it over and over in my head - that, while I was trying to stay relaxed, if I had really dug in and pushed a little harder would that made the difference?
“I’ve played that scenario so many times in my head that when it came to the night in Manchester, with 200m to go I told myself to dig in and make sure I had no regrets.
“I told myself ‘go as hard as you can - put it all on the line’,” he said. “Thankfully it paid off.”
It was a fantastic achievement for Everard, one made even more remarkable given how athletics has been one of the many sports to suffer from lockdown.
“With the Covid restrictions, my last real race before Manchester was the event in Belgium,” he said. “Thirty-three was quite old for elite running, so you’re always wondering if you’ll get a chance to have it again.
“It was great to get into that race in Manchester,” he added. “At the top end, a lot of things have to go right in order to run a PB. I really had to increase my mileage for this record, and as you get a little older there’s always the uncertainty that I’d be able to do it.
“Although I’d run 14:00 in a lot of other races I’d finished in 14:15, 14:30,” he added. “With times like that I hoped I hadn’t missed my chance. Getting into good shape and doing it meant so much.”
It seems that the older he’s getting, the faster Everard has become. Taking a more relaxed attitude has helped, he reckoned, along with looking after his body.
“I’ve been running competitively since I was 16, but I think I’ve become a little more relaxed about running as I’ve gotten older,” he said.
Enjoy
“I think I’ve a better perspective, I enjoy it more. That’s helped me to relax and maybe get a little more out of myself as I’ve gotten older.
“I made my first ever cross-country team two years ago - you look around and go ‘there’s not a lot of people making it at 34 for the first time’. I think being relaxed, and moving home, helped me to enjoy it more. I was always training hard, but I began to enjoy it.
“I also think having guys like Brian Maher, Thos Hayes and James Ledingham to train with has helped, as has looking after my body with Pilates and staying healthy.
“I think it’s encouraging for anyone,” he said. “You never know when you’re going to hit your peak. If you’re enjoying it and trying your hardest you can reach it at any age.”
Having been so close to breaking the record, being forced to put everything on the backburner when the pandemic struck proved to be another challenge.
“It was tough to stay motivated,” he said. “You’ve no track to train on, but the one thing is that I had always enjoyed running anyway. There is a great group here among the Kilkenny City Harriers (KCH) runners who will keep you motivated, so it was a case of training at 80/90% of the intensity, not overdoing things so I wouldn’t get injured. I knew races were going to come back at some stage, so when I knew events were coming up for this summer I was able to up the intensity again and go back into it. It was tough to keep that motivation going, especially through lockdown last year. As you get that bit older you just hope you can still run as fast as you did. 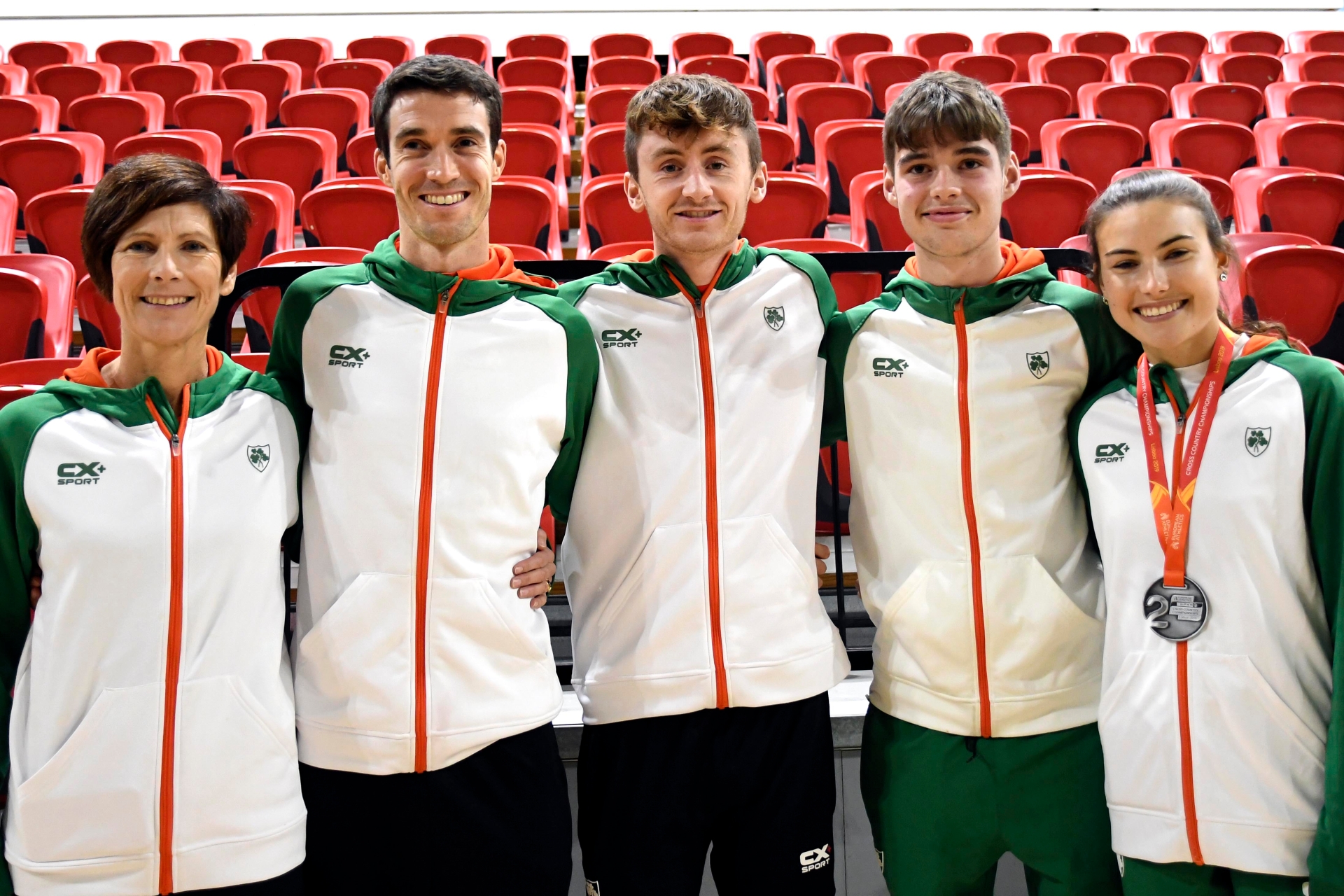 Everard was part of a five-strong Harriers group who represented Ireland at the Euro Cross-Country Championships in 2019 - he is pictured here with Niamh and Aoibhe Richardson, Peter Lynch and Shay McEvoy

“When I was close to breaking the record in Belgium, I was worried about waiting one year, nevermind having to wait two more years, but having the guys here and enjoying my running helped to keep me motivated and still involved, so when races do pop up you can be ready for them.”
The mere mention of names like Maher, Hayes and Ledingham highlights how Kilkenny undersells itself in the calibre of athlete present in the county. Everard was quick to hail his colleagues for their help.
“A run shared is a run halved,” he said. “If you can get someone to run with you it makes a massive difference. Kilkenny has great sporting talent across all sports and there’s a great group mentality where everyone helps out - it makes it more of a community level. Having someone to train with really helps.”
And it’s great for the younger generations to have these athletes to look up to, as the Harriers showed when their international contingent from the European Cross-Country Championships in Portugal - Aoibhe Richardson, Everard, Peter Lynch, Shay McEvoy and team manager Niamh Richardson - handed out medals to junior athletes at an end of season awards night.
“You never know what could motivate people,” he said. “It’s great for us to come home and get a reception like that, but it’s even better that you could inspire someone who could make a massive breakthrough in the future. It’s great that KCH has had so much success in a lot of different groups. It’s good to celebrate that and help promote the club.”
And with another record in the bag, he’s already looking to the future.
“I’d like to try and break the 30-minute mark for the 10k race,” he said. “I could also try to break eight minutes for the 3k distance.
“If I managed both I’d have all the odds,” he said, that smile still present. “I’d be done then!”