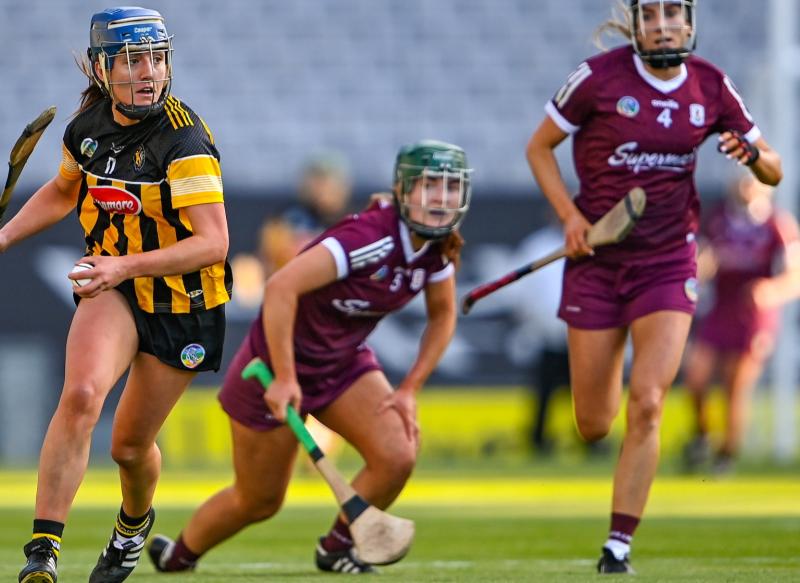 Mary O’Connell has been one of the leading lights in the Kilkenny attack throughout this year’s league campaign and she again stood out as the Cats claimed Division One glory.

The centre forward scored three points from play, all of them came in the second half including the final point of the game.

It maintains a successful few months for the Cats and O’Connell and her teammates are keen to see that continue.

“Whenever you get to Croke Park and there’s silverware up for grabs, of course you want to win,” noted the Clara star.

“It’s a great feeling, we’ll enjoy it for a few days, then reset and focus on the championship again.

“The more you can get the better. Sometimes it can be a long time coming. Galway are unbelievable. They were up by three points at half-time. They threw everything at us in the second half as well but fortunately we were on top at the final whistle.

“Even personally, I was making a few mistakes in the first half and was unsettled. You go in at half-time three points down, all you can do is throw the kitchen sink at it in the second half and hope for the best and that’s what we did. There’s huge hunger. The first ten minutes of the second half we pushed on and the win stemmed from there.

“And it was even just building confidence getting those scores, especially getting scores from play. That’s huge for us. When you see Aoife Doyle hitting that ball into the roof of the net, that gives huge confidence for the team.”

Kilkenny came into the game on the back of two very close run affairs with Limerick and Tipperary so despite trailing at half-time there was no sense of panic among the players.

“The last two games against Tipperary and Limerick, we only won both games in the last five minutes, so we know we have to play for 60 minutes. The game is never won until the final whistle is blown. That’s what we’ve learned over the years, it’s so important to stay going, don’t panic.”

If O’Connell and Kilkenny have learned anything during this league campaign it’s that the chasing pack are getting closer and they know they will have many challengers when they begin their defence of the All-Ireland title in a few weeks’ time.

“It’s great to see. Tipperary probably should have beaten us and Limerick were absolutely brilliant as well. I was blown out of the water by how good Limerick were. It will be a good championship.

“Having the League final on TV was great. The more coverage this game gets the better. It’s building and building and hopefully it stays going that way.

“The game went down to the wire. We were still level with time almost up and that’s what Galway bring. So we are just delighted to get on top but we have them in championship again in few weeks’ time so we’ll be focusing on that now.