Dormer hails impact of the squad in exciting league victory 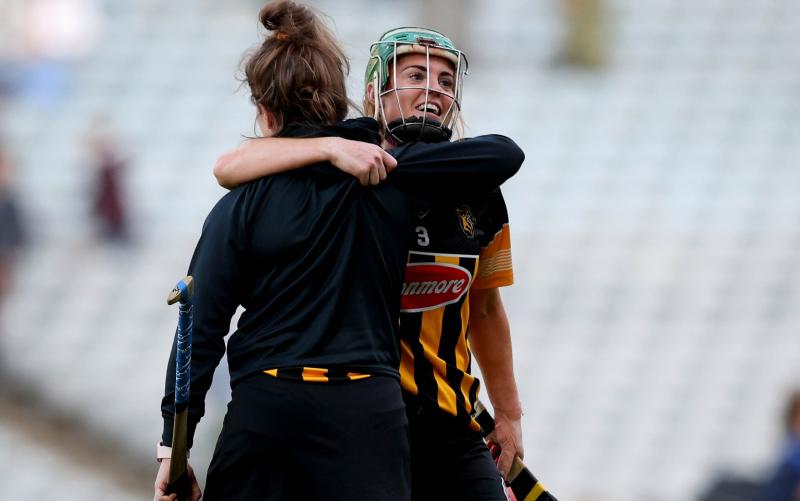 Colette Dormer was one of the stars on the Kilkenny team during the victory over Galway Picture: Ryan Byrne/Inpho

She is the rock at the heart of the Kilkenny defence and on Sunday Collette Dormer showed exactly why she is rated as one of the best defenders in the game.

The full back was a menace to the Galway attack as she hooked, blocked and did whatever it took to get her team over the line and that included pulling down a Galway forward late on.

Along with Michelle Teehan and Davina Tobin she is part of the most feared defence in the country and you could see what the victory meant to them.

“It was a brilliant game and the girls showed great character to finish it out to the end and to push it on because Galway are such a tough team and they can catch you on the bounce at any second and we needed to be switched on for the entire 60 or 70 minutes,” the Barrow Rangers star said.

“The main thing for us is to perform in Croke Park as we are only three weeks away from the championship so to win the league is a huge boost to the squad.”

In similar fashion to the Limerick and Tipperary games Kilkenny looked out of sorts in the opening half but they were a completely different side in the second period as they got on top all over the field.

“We were under severe pressure at times and thank god Aoife Norris came out and pulled off a savage save near the end,” she said. “That really saved us but the forwards were just fantastic in the second half and they came out and won rucks as well as turning over ball so it was brilliant.

“Brian (Dowling, manager) asked us at half-time to show character and drive it on and everyone did that.”

“The half forward line were winning ball they had no right to win and thankfully it worked out for us in the end.”

The dominating defender was also at pains to point out the role the entire squad had on the league win as there was stages during the campaign that she and Davina Tobin missed out. Claire Phelan was also absent for the weekend’s game but Kilkenny keep on winning regardless.

“We don’t have subs on this team - we have finishers,” she said. “Girls came off the bench and did the job for us.
“When you are on the field and you know that it means you can give it your all as long as your on the field and then someone like Steffi Fitzgerald can come on and score a brilliant point like she did at the end.

“It just goes to show that you really do need the subs to perform.

“We always say that we want to leave the Kilkenny jersey in a better place and the girls that are coming through are really having an impact,” Dormer added. “We know that you are always replaceable so for the youngsters to push on has been brilliant.”

Unlike the All-Ireland victory there was a limited amount of spectators in the stadium and the players really enjoyed having them back.

“It was fantastic to see the crowd back and there was a cheer that went up at the end of the game that gave you a great buzz,” she said.

“Even when you won a free you could hear the cheer so it was great to have them back.

“We really missed having the crowd when we won the All-Ireland in December so it was just great to have family and friends here tonight and it really helped us perform.”

While Dormer was all business on the field she couldn’t help but smile when asked how it felt to see Katie Power back.

“I was on cloud nine and buzzing to see her back on the field,” she said.

She is a true leader to everyone on this team and is everyone’s best buddy really.

“It’s just fantastic to see a player like that coming on and while we’ve lost Anne Dalton and Anna Farrell we know there is a revolving door in Kilkenny but to have Katie back is just class.”