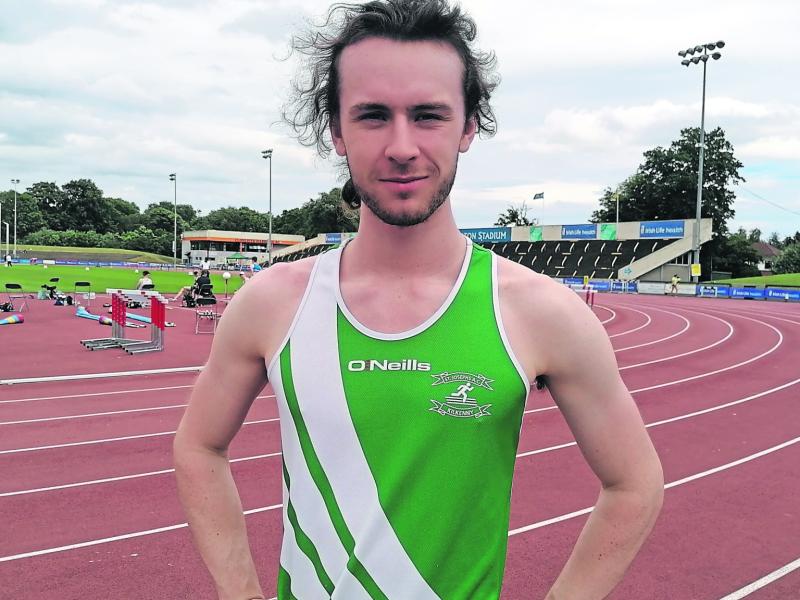 Eight years ago, a new Leinster pole vault record was set in Tullamore.

That record tumbled last weekend in Carlow when it was smashed by none other than St Joseph’s AC athlete and pole vault supremo Shane Power.

Perhaps it was to avenge his performance in the national seniors a week ago, where the crosswind played havoc with his vaulting. Maybe it was to show the athletics world that he could still pull an amazing performance out of the bag, or maybe it was a performance that he was capable of producing all along.

Whatever the reason, Power established a new Leinster senior championship record and personal best, putting himself as the leading pole vaulter in Ireland once again.

As with most of his performances, Power forfeited the right to jump lower heights and started his vaulting at 4m 20cm. This is something that many of the top vaulters prefer to do as it helps conserve their energy for the bigger heights. It does, however, put them at a disadvantage. If two athletes draw and they all jump each height at the same attempt, those who come into the competition later, will automatically lose out. Despite this, athletes still prefer to take their chance.

Power was the only athlete with a clean first vault record from 4.20 onwards. Even Michael Bowler of Enniscorthy, who finished ahead of Power at the Nationals a week ago, failed his first jump at 4m and 4.20m.

At 4.56 Shane has already won the competition at 4.40m and as is customary, the winner is given the option to try and break the championship record.

Instead of raising the bar to 4.50m, it was raised just above the record height, 4.56m. He cleared it on his first attempt. Those watching broke into a round of applause. His competition rivals were also thrilled for him; it is not every day a championship record is broken.

Pole vaulting has proven to be one of the most watched and exciting events of many an Olympic Games. Currently Armand Duplantis of Sweden currently is ranked number one in the world. Along with Renaud Lavillenie (France), these two vaulters have kept the athletics world mesmerised with their thrilling vaulting duels over the last few years.

Pole vaulting, originally for distance, dates back to at least the 16th Century. There is also evidence it was an athletics event in Ancient Greece. Originally pole vaulting was a practical means of clearing objects, such as ditches, streams, and fences.

Pole vaulting for height became a competitive sport in the mid 19th Century when, in Germany in the 1850s, the gymnastic association introduced it as an event. It has been an Olympic event for men since the first modern Olympics in 1896 and for women since the 2000 Olympics in Sydney.

On the track Bronagh Kearns had the race of her life.

Moving up to 3,000m the St Senan’s athlete, who finished seventh in the national senior 1,500m final last week, decided to test her ability over the longer distance for the first time this year.

The plan was to go out at 9.40 pace and see how long she could maintain this. For the first two laps she stayed behind Niamh Kearney and Siobhan Evaston – both from Raheny Shamrock AC.

At the 1km mark Kearney, who has a 9.30 PB under her belt, decided to make a break and took the lead by five metres. Bronagh took a gamble and went with her, running in Niamh’s shadow for a further 1.2km.

With 800m to go Kearns felt so comfortable that she took the lead herself. Her lead increased incrementally over the penultimate lap. Her last lap was reminiscent of that of a 1,500m pace rather than a 3,000m pace. Her finishing time 9.25 – a new personal best and just four seconds off Anne Keenan Buckley’s record that has stood since 2001. Another outing and it will be most definitely doable.

As convincing as Bronagh’s win was in the senior 3,000m, so too was the gold medal-winning performance of clubmate Sophie Jackman in the junior women’s 800m.

Jackman led from the start and was never challenged throughout the race. Her winning time was faster than that of the senior women.

There was more to come from the St Senan’s crew when another clubmate, national under-23 steeplechase winner Aoife Allen, took gold in the senior steeplechase.

Fenlon is no stranger to shot-put, having won several Leinster titles as a juvenile. She led a Kilkenny trio to the podium with Emma Kelly (Brow Rangers) second and Mary Fitzgerald (Gowran) third.

The Thomastown senior women decided that the gold medal winning performance for a county women’s team was called for. In the last event of the day the quartet of Caoilte Malone, Aine Kirwan, Ellen Ryan and Emma Manogue were engulfed in a thrilling head to head all the way with Ratoath AC.

The Meath club held the lead by the tightest of margins going into the final leg. The final 400m saw the lead change a number of times between the two clubs before Thomastown pulled ahead in the final 50m to win by one second.

Kilkenny City Harriers (KCH) athlete Jack Manning was not going to be eclipsed by sister Cliodhna in the 400m and proved that there is room for two decent 400m runners in the family.

Having dabbled with the 400m last year, moving up from his preferred event of 200m, Manning has favoured the longer distances all this year. He clinched the gold medal last weekend to become Leinster senior 400m champion in a time of 49.10.

Brow are best in Leinster

The senior men had another gold in the form of Patrick Darcy (Brow Rangers) who won the weight for distance event. This was the first of 10 medals that the Coon-based club amassed over the two days.

Between the senior and masters they dominated the throwing events, something many are accustomed to seeing Brow Rangers do. Leading the way was Murty Kelly, who won both the discus and hammer over-70 titles. He has no intention of retiring just yet.

With Brow Rangers claiming six gold medals in the masters competitions, they were the leading masters club from the county in these championships.

Elsewhere masters from other Kilkenny clubs added to the golden haul. John Barron of Kings River took the over-50 long jump title while Tom Corrigan (Gowran) had a double in the over-40 100m and 200m.

John Joe Lawlor added to his growing haul of Leinster walking titles when he won the over-55 event. The women saw gold in the form of Mary Breen (St Joseph’s) in the over-60 shot putt with clubmate Tracey Malone winning the over-45 walk.

A special mention of two competitors – both good enough to claim medals over the weekend but unfortunate not to do so. Ronan O’Donovan (St Senan’s), a former National 800m champion, had his eyes on the over-40 800m title. The spoils were in his grasp but, five metres from the line, he tripped and was cruelly denied victory.

In the junior women’s 3,000m race Hannah Kehoe was making her return to Leinster competition after a three-year gap.

Injury has plagued this talented Borris-based athlete and prevented her from racing. Covid provided the perfect opportunity for her rehab.

Lying in second position for much of the race, with two laps to go what started out as a little niggle became unbearable pain, causing Hannah to withdraw from the race with 400m to go. Now racing for Thomastown, all hope to see Hannah make a welcome return to winning ways when she will compete in the Leinster juveniles next week.