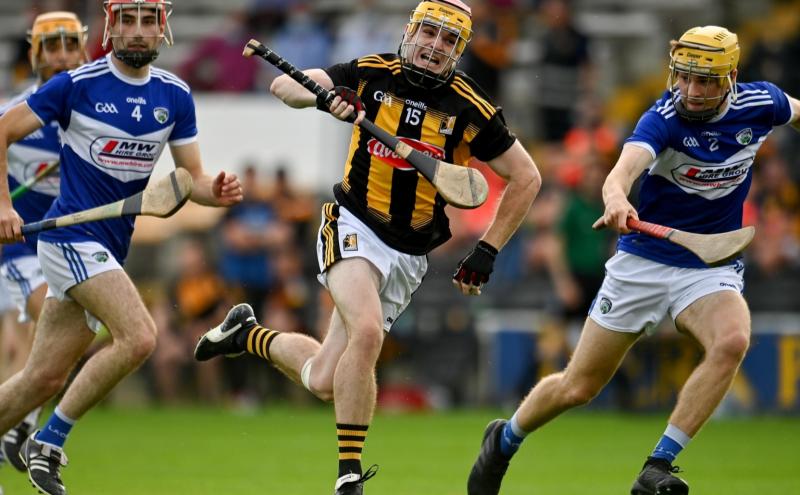 Eoin Guilfoyle in action against Danny Brennan, left, and Ian Shanahan of Laois during the Leinster U20 Hurling Championship Quarter-Final between Kilkenny and Laois.

Kilkenny booked their place in the semi-finals of the Leinster Under 20 Hurling Championship after a hard fought three point victory over Laois in UPMC Nowlan Park.

Laois with two games behind them against Westmeath and Antrim pushed the Cats to the pin of their collar and it wasn't until Derek Lyng's side hit five points on the trot in the final quarter that they found the breathing space to see the game out.

Through James Duggan, Ciaran Byrne and Tadhg Cuddy, Laois were very forceful in attack and it was only a well taken Conor Kelly goal that kept Kilkenny in the game in the first half.

Laois led 0-11 to 1-7 at the interval but by the 43rd minute all three of the minors that played in last Saturday's All-Ireland final were introduced and Billy Drennan, Timmy Clifford and Cathal Beirne all had an impact.

Still Laois were managing to keep their noses in front until that final quarter burst where Ian Byrne, Billy Drennan, Peter McDonald and Eoin Guilfoyle all knocked over points to push Kilkenny ahead (1-17 to 0-14).

Laois didn't throw in the towel though and they netted a late goal when sub Dan Delaney converted a penalty after Mark Hennessy was brought down in the square.

It still ended badly for the O'Moore County though with Tadhg Cuddy getting a late red card as Kilkenny held out to win on a 1-18 to 1-15 scoreline.