‘POINT’ MADE IN
STALEMATE 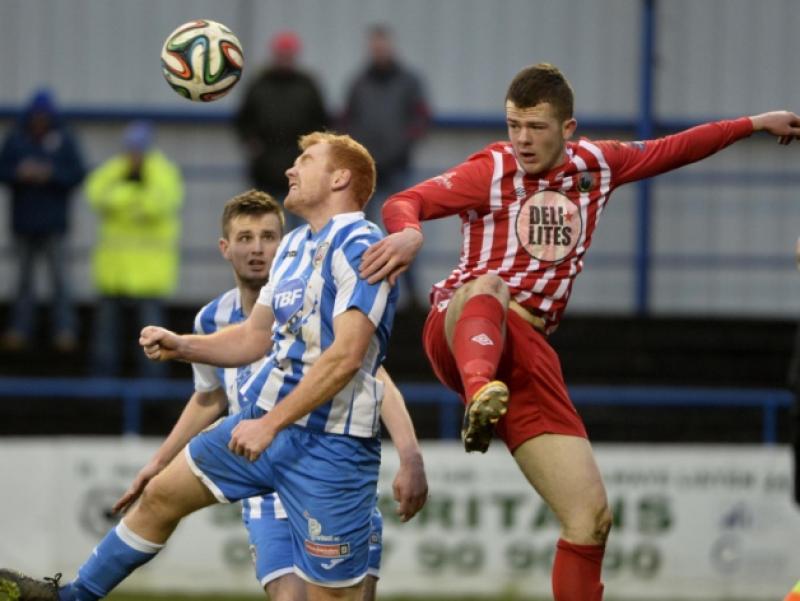 Coleraine failed to make it three wins on the bounce as they were held by a stubborn Warrenpoint Town at the Coleraine Showgrounds.

Coleraine failed to make it three wins on the bounce as they were held by a stubborn Warrenpoint Town at the Coleraine Showgrounds.

It was the visitors who ought to have taken an early lead as an excellent delivery from Mark Hughes found an unmarked Ciaran O’Connor in the box.

The in-form striker – who scored a match winning double against Portadown last weekend – was picked out at the back post, but to his dismay he could only see his header rebound off the post.

The ‘Point might feel they should have been awarded a penalty moments later as O’Connor went under the challenge of Coleraine ‘keeper Michael Doherty.

However, referee Paul McGrath wasn’t interested in the protests and waved play on.

On 21 minutes, Warrenpoint went close once again as Stephen Hughes latched onto possession and struck an effort on goal which was deflected just wide. From the resulting corner, Jonathan Cowan also saw his shot deflected wide from close range.

The home side managed to create their first meaningful opportunity on 23 minutes as Joe McNeill broke clear from a corner and played a great ball over the top of the Warrenpoint defence. The ball was picked up by Mark Miskimmin but he could only blast his effort over the bar.

The best effort for the home side in the opening period came from a Neil McCafferty free-kick. The midfielder stepped up but curled his 25-yard free-kick just wide with Jonathan Parr rooted to the spot.

The next chance arrived on 74 minutes as Johnny Watt released Gary Browne on the left-hand side.

The striker crossed the ball for Parkhill but he could only hit a weak header into the arms of Parr. The Bannsiders searched for a late winner as the ball landed to McCafferty but his effort was easily saved.

At the other end, the County Down side should have grabbed all three points as a Kane mistake allowed Johnny Breen to go one-on-one with Doherty. The substitute was denied by the feet of the goalkeeper much to the frustration of ‘Point boss Barry Gray.