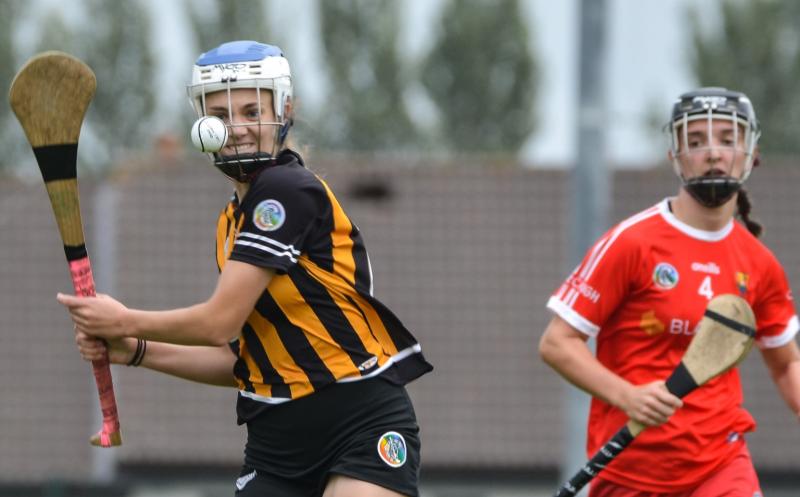 Kilkenny progressed to the knockout stages of the Intermediate All Ireland Championship after beating the Rebels in John Locke Park last Saturday.

Sophie O’Dwyer scored Kilkenny’s first point in the 3rd minute from a 25m free. Three minutes later, Tiffany Fitzgerald played the sliotar upfield from the Kilkenny defence to Sophie O’Dwyer, who passed it to Hannah Scott. Hannah ran up the sideline and cut in towards the Cork goal, she handpassed the sliotar in front of the inrushing Danielle Quigley who doubled first time to the back of the net to put Kilkenny ahead 1-1 to 0-0.

From the puckout Cork played the sliotar upfield and wing forward Rachel Harty slotted over the bar and over the next six minutes, the game went from end to end with some great defending from both teams.

Again over the next eight minutes, scores were hard to come by as both defences stood tall with nothing conceded.

In the 29th minute, Sophie O’Dwyer converted a 25m free for Kilkenny after a Cork defender was deemed to have thrown the sliotar. This was the last score of the 1st half to leave it 1-3 to 0-4 in favour of Kilkenny at the interval.

After the resumption of the second half, play went from end to end without either side adding to their respective tallies despite several opportunities for both sides for the first 10 minutes of the second half.

When play resumed Kilkenny were first off the mark when Eva Hynes pointed following a neat pass from Laura Hegarty and the homeside built on this tally when Hynes added a further point from a placed ball.

The Kilkenny side then went three points clear when Laura Hegarty pointed despite being under immense pressure from the visitors defence.

Cork responded with a Finola Neville point but the Cats replied with a well worked goal as Hynes had a shot parried by the Cork keeper, but Hannah Scott pounced on the loose ball to bury the ball to back of the net to put five points between the sides approaching final whistle.

The visitors had a late point from Finola Neville but the homeside emerged victorious as the scoreboard read 2-7 to 0-9 putting the Cats through to the All-Ireland Semi Final on the 28th August.