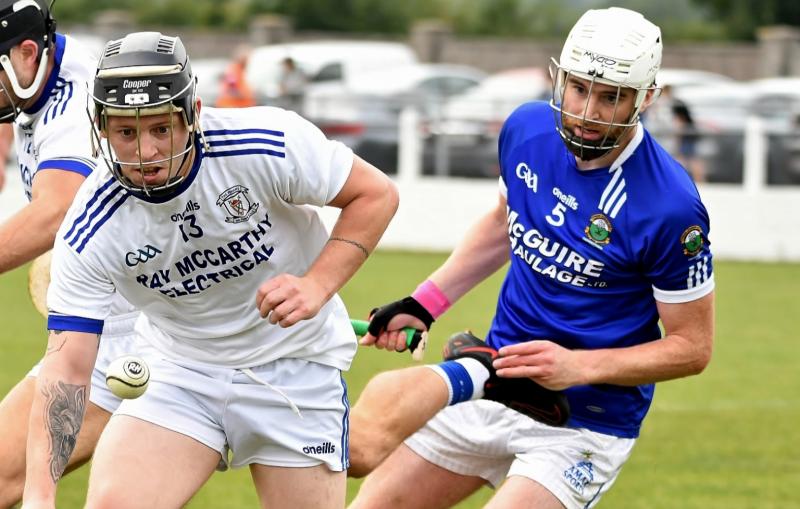 Mark Webster gets to the ball ahead of Barry Whelan during this afternoon's Michael Lyng Motors Intermediate Hurling League clash at Palmerstown. Pic: Willie Dempsey

It took a pair of stoppage time goals from John Donnelly and Naoise Dempsey to hand Thomastown boss Henry Shefflin victory in the opening round of the Michael Lyng Motors Intermediate Hurling League after they defeated Fenians of Johnstown on Saturday afternoon.

After a hugely successful stint as manager of Ballyhale Shamrocks, all eyes were on Shefflin’s side and in truth they could count themselves incredibly fortunate with the end result.

In what was a tempestuous affair in periods, Fenians saw full forward Darragh Tobin given a straight red card on the cusp of half-time and trailing by three points they looked in a degree of bother.

Helped by former Kilkenny star JJ Delaney emerging from the bench Fenians outplayed Thomastown for the majority of the second period but they couldn’t quite see the game out.

A mistake from Thomastown goalkeeper Diarmuid Galway allowed ace score getter Mark Webster find the net in the 33rd minute and they led all the way to stoppage time.

Thomastown really struggled to deal with the physical style of the Fenians and they were visibly frustrated until they struck two goals within two minutes at the end.

John Donnelly was influential throughout for the winners and his rather fortunate goal in the 64th minute where he directed the sliotar towards the square and it evaded everybody levelled matters before sub Naoise Dempsey sealed the victory with an expertly taken effort moments later.

The first round league clash may serve something as a wake up call for the side who have been defeated in the last two intermediate finals and although they are big favourites to emerge as championship winners they know the performance levels will need to rise.

That gave Thomastown a two point lead and they doubled that by the time of the first water break through efforts from Kehoe, Brian Staunton, Jonjo Farrell and John Donnelly.

Fenians stayed in touch with points from Webster and Willie Brennan but on the back of the opening water break, Thomastown had raced 0-11 to 0-5 clear on the scoreboard.

By this point Kehoe had knocked over four points from midfield for Thomastown and with Donnelly and Farrell beginning to exert their influence they seemed to be in total control.

Fenians rallied however and through a trio of Webster frees the gap was back to three.

It was a game that was always simmering right on the edge and things escalated just before the break when referee Gavin Quilty sent off Fenians full forward Darragh Tobin after a scuffle broke out amongst the players.

Within five minutes of the restart 14 man Fenians were in front though with Webster pouncing for an opportunistic goal on the back of points from himself and Pa Duggan.

The Johnstown based outfit then kept their noses in front at the first water break as they led 1-13 to 0-15 and when Webster and Willie Brennan pushed the lead out to three at the end of normal time they looked set for a shock victory.

At that stage Thomastown probably didn’t deserve anything out of the game but they kept plugging away in the guise of their manager and after Donnelly’s effort found the net in the 64th minute, you always got the sense they’d find a winner and so it proved.