Kilkenny SHL- League champions Dicksboro off to a winning start 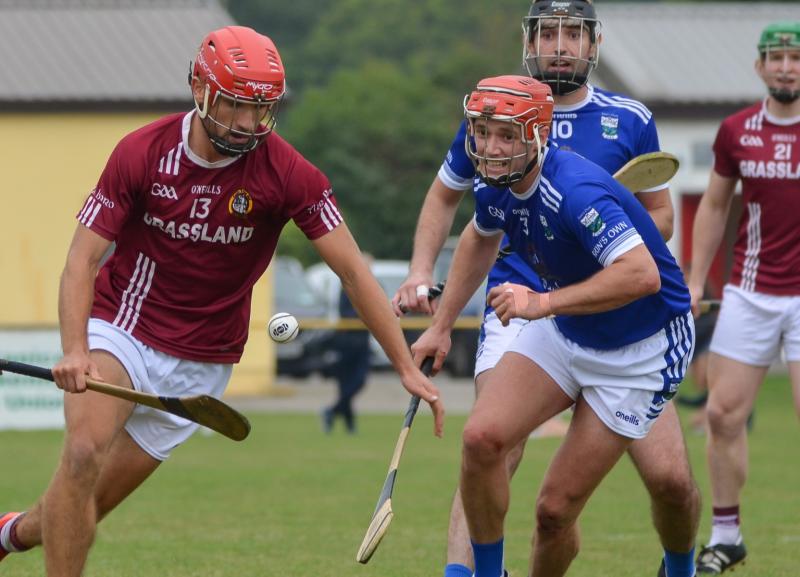 2020 St Canices Senior league champions Dicksboro got the defence of their title off to a winning start when they ran out seven point winners over Erins Own on Saturday afternoon in Freshford.

Goals in each half from Mark Nolan and Aidan Nolan set the Kilkenny city side up from victory and they will have been pleased to get their season up and running.

Castlecomer outfit Erins Own were competitive throughout but the extra experience and class of last year’s beaten county finalists eventually told for a Dicksboro side that is managed by former Waterford boss Paraic Fanning.

In front of a sizeable crowd it was Erins Own who made the brighter start when an effort from play by John Dowd was followed up by a Jack Buggy free.

Dicksboro got on the board in the 6th minute when centre forward Shane Stapleton found the target before Mark Nolan and Kevin Kenny added on further scores.

Dicksboro led 0-3 to 0-2 at that stage but Erins Own fought back with efforts from Buggy, Shane Feehan and Declan Dunne.

It was a nip and tuck opening period and three points on the spin for Boro had them leading at the opening water break on a 0-6 to 0-5 scoreline when Staunton, Cillian Buckley and Aidan Nolan all found the target.

Bill Sheehan had an opportunity to extend that lead even further when breaking free of the Erins Own rearguard but he saw a goalbound effort turned away by Tom Brophy.

At the back end of the opening water break Erins Own levelled up matters through points from Buggy and Robert Moran but it wasn’t long until Dicksboro raced clear on the scoreboard.

Four points in as many minutes from Aidan Nolan as well as a trio of efforts from Staunton left Dicksboro ahead by four and while Buggy and Dowd briefly reduced the deficit, the opening goal of the game was only around the corner and it came for the victors in the guise of Aidan Nolan after he broke forward before shooting to the net.

That goal looked to be something of a killer blow for Erins Own as they were back within a point before Nolan struck to leave Dicksboro ahead by four at the break.

The Castlecomer outfit were proving to be stern opposition for the Boro lads though and they knocked over the first three points in the second period to again move within touching distance of their opponents.

Buggy who finished with six points in total was on target once more along with Shane Feehan and James Brennan but as was the case for a lot of the contest, Dicksboro always had a response.

Liam Moore steadied the league champions with an expertly taken point in the 38th minute and the score proved even more crucial when Erins Own missed out on a goal a couple of minutes later.

After the usually reliable Dicksboro full back Padraig Moylan misread a long ball into the danger area, Dowd was there to pounce and he laid off the ball to Stephen Daly but his shot was stopped by Darragh Holohan.

It proved to be the game’s turning point as Dicksboro quickly added on three points afterwards with Joe Sheehan, Aidan Nolan and sub Oisin Gough all finding the target.

A second Dicksboro goal then arrived in the 45th minute when a careless Erins Own sideline cut resulted in Moylan and Stapleton combining before Mark Nolan finished the job.

Dicksboro led by eight points at that third quarter mark and while the game looked to be as good as over as a contest, Erins Own kept plugging away and they soon got their reward when Martin Boran latched onto a poorly directed Holohan puckout and all of a sudden the game was on edge once more.

A third John Dowd point then left three points between the teams heading into the final ten minutes but Erins Own would get no closer as Dicksboro went through the gears.

The city side hit seven points over the course of the rest of the game with Cillian Buckley, Bill Sheehan, Liam Moore, Shane Stapleton and Mark Nolan all scoring in the final few minutes.