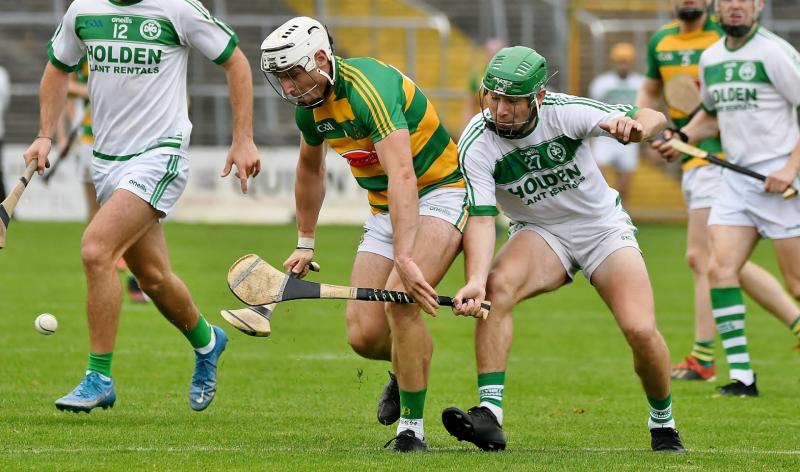 Despite scoring six second half goals All-Ireland champions Shamrocks of Ballyhale ended up on the losing side in a chaotic St Canice’s Credit Union senior league clash with Bennettsbridge on Sunday afternoon in UPMC Nowlan Park.

In similar circumstances to the 2020 league, Shamrocks were very slow out of the blocks and they were outplayed for the majority of the game.

Bennettsbridge were dominant for long periods and led by twelve points at one stage in the second half.

Shamrocks lined up without the likes of Richie Reid and Darren Mullen while Eoin Cody and Adrian Mullen were very much off colour but in TJ Reid and Colin Fennelly they had two stars that almost single handedly brought them back into the game and Reid almost snatched a scarcely deserved draw at the end when he had a 21 yard free blocked on the line.

If that ball had nestled in the back of the net Bennettsbridge will have pondered how on earth they managed to throw away a game they were in complete control of after Sean Morrissey, Kevin Blanchfield and Kevin Brennan ran riot.

Led by a star studded management team that includes Willie Maher and Dan Shanahan their inventive playing style caught Shamrocks off guard they were worthy winners.

Shamrocks will still take plenty from this defeat though as despite playing awful for three quarters of the clash they still managed to turn it on in the last quarter and on another day they may have snatched a sensational share of the spoils.

TJ Reid got the scoring underway with a well taken point for Shamrocks but it was Bennettsbridge who had the better of the opening exchanges and they soon moved 0-3 to 0-1 ahead after points from Liam Blanchfield, Kevin Blanchfield and Nicky Cleere.

Centre forward Sean Morrissey also had a chance for goal but he saw his effort expertly palmed away by the stick of Dean Mason in the Shamrocks goal.

Reid and Colin Fennelly added on further points for Shamrocks but it was an opening quarter that was controlled by Bennettsbridge and after Morrissey netted in the 7th minute and Nicky Cleere and Ciaran Brennan pointed, there was five points between the sides at the opening water break.

Shamrocks stalled the victors momentum initially with a brace of scores but they were very much second best in the opening period and with Cleere and Morrissey continuing to add to their tallies Bennettsbridge led 1-13 to 0-7 at the interval.

Colin Fennelly had the ball in the net just before the break but it was ruled out for a square ball and it summed up the Shamrocks fortunes in the opening half.

The Shamrocks onslaught still hadn’t arrived by the second half water break and 11 points to the good Bennettsbridge looked home and hosed.

Shamrocks don’t do quit though and they got their opening goal in the 47th minute when Brian Cody slammed a shot past Enda Cleere after going on a mazy run.

That opened the floodgates and within two minutes Shamrocks scored two more goals with TJ Reid and Colin Fennelly both on target.

That left just three points between the sides but to their credit Bennettsbridge had a response and they notched two quickfire goals with Sean Morrissey and Kevin Blanchfield scoring to leave the Bridge ahead on a 3-20 to 3-11 scoreline.

The game was still far from over though as Shamrocks still threatened for goal with Fennelly getting his second effort in the 55th minute before he was brought down for a penalty which TJ Reid converted two minutes later.

Marksman Reid then had a hat-trick of goals when a speculative long rage free somehow ended up in the net.

Bennettsbridge were able to keep their noses in front through points from Nicky Cleere and Kevin Brennan but Shamrocks still had one last chance when they were awarded a 21 yard free and Reid blasted a shot towards goal but it was blocked on the line and referee David Hughes blew the final whistle moments later and those in attendance could draw breath after a titanic struggle.