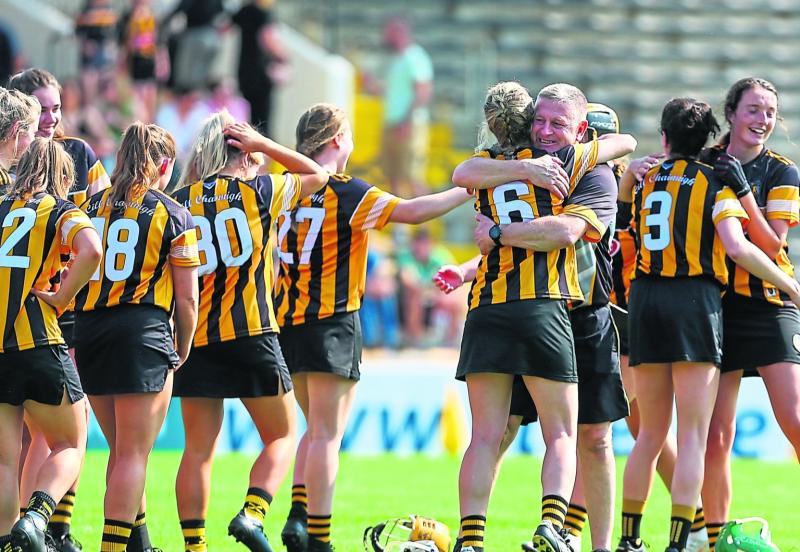 After the Kilkenny camogie side relinquished their senior All-Ireland title a couple of weeks ago, it now means all local eyes will be fixed on the intermediate team that will face Antrim in the precursor to the senior decider on Sunday afternoon with a 2.00pm throw-in.

It’s a stage that the Kilkenny second string side haven’t been used to in recent years as it will be their first Croke Park appearance since 2016 when they emerged victorious over Cork.

The Cats will face off with Antrim and after losing out to the Ulster side in the round robin series of the championship, John Scott’s team will start as underdogs.

“We are happy to be in an All-Ireland final and it was the dream at the beginning of the season in truth and while things midway through the year didn’t really go our way, we still got there eventually and it took a lot of hard work to get us into this position and we can only see what happens in the final now,” Kilkenny boss Scott admitted.

“The day Antrim defeated us in the opening game of the championship proved to be a positive experience for everyone involved in the team.

“We went up and back on the bus and the girls were naturally disappointed that they were beaten so the fact that they have knuckled down and won three games since that day shows the character in this Kilkenny squad and it’s only a coincidence really that it’s Antrim that stand in the way again.”

Antrim ran out four point winners on a 2-13 to 1-12 scoreline over the Cats in Dunloy back in July but Scott and his management team feel they learned a lot of valuable lessons on that day.

“I’ve been around a long time and I keep on saying that you learn far more in defeat than you would for a victory so once the lessons are learned it can prove to be a very positive exercise and you should be better prepared for when you face the opposition again so we will find that out on Sunday.

“Both the Antrim game and the league defeat to Meath provided us with question marks surrounding the side but they have grown into themselves in the last few weeks.”

Kilkenny have had a solid look throughout the championship thus far and apart from the Kildare game where they were comprehensive winners, they have looked the part in close victories over Cork and Meath and the effectiveness of the forward line has really came to the fore with the likes of Sophie O’Dwyer, Danielle Quigley, Hannah Scott and Ciara O’Keeffe playing crucial roles.

“All the way up from midfield to number 15 they are all moving well and getting their scores and maybe the fact that we don’t rely on any one player to get the scores is working to our advantage.

“There is no star in our ranks so we just get on with it and we are delighted with the way the girls are playing at the moment and hopefully that can continue,” Scott said.

Throughout the 2021 campaign the Kilkenny boss has always mentioned how he wants the Kilkenny intermediate team to act as a development panel to the senior side and even though they are within 60 minutes of an All-Ireland title, Scott maintains that is still the number one objective.

Making the step up

“The main plan for all of these girls is to hurl senior for Kilkenny and while there is a few of them on the extended squad at the moment, there is always room for a few more and they will all be aiming to impress Brian Dowling this weekend.

“The step up from minor to senior is so big that the intermediate provides the perfect middle ground for young players to learn their trade and even at this grade it’s a fast game and it’s tough stuff so it is very beneficial to a lot of players.

“It’s a development squad for the senior panel really and you have the perfect mix here with experienced girls that are on the fringes of the senior squad added in with the blend of talented youngsters so it’s gave the girls a great experience.

“For us and the here and now, it’s a chance for the girls to win an All-Ireland title in Croke Park and it’s a fabulous opportunity for them as they may never have a better chance again.”

After something of an injury hit year, Kilkenny will travel to GAA HQ with almost an entirely fit squad to choose from as they hope to recapture the intermediate crown and build on the huge progress that they have made as a squad throughout the year.

“Everyone is available to us and while we did have a few long term knocks we are hoping they will all be ok for us on the day, Aisling Curtis broke her wrist in the Antrim game but she’s out of a cast now and we’ll see how she gets on in training before the final and apart from her we have everyone else fit and ready to go.”

The game takes place in Croke Park at 2pm and will be live on RTE 2.