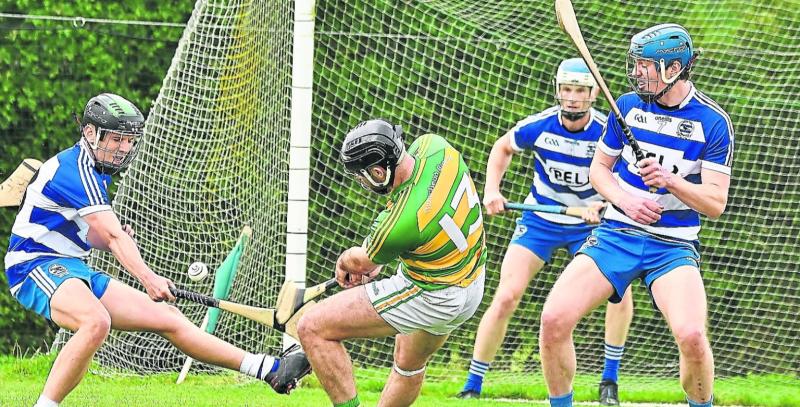 Bennettsbridge were thankful to goalkeeper Enda Cleere after his penalty save eight minutes into stoppage time helped his side to a three point victory over a gallant Lisdowney outfit in Danesfort on Saturday afternoon.

It was the second week in a row that the Tim Dooley led side were left hanging on in a game they should have put to bed much earlier.

Six goals in twenty minutes meant county champions Shamrocks almost caught them in round 1 and in this league clash they looked to have the game sewn up when leading by six points at one stage.

Unknown to them there would be almost nine minutes added time though and they carelessly gave away a couple of scoreable frees which Lisdowney’s Aidan Tallis predictably knocked over and although they got the lead back up to three they still conceded a penalty in the last attack of the game.

Tallis was adjudged to have been fouled in the square and midfielder Michael Kenny stood up to take the effort for the 2020 Intermediate champions but Enda Cleere stood tall to produce a marvellous save as Bennettsbridge made it two wins from two in the league thus far.

Spurred on by a last minute equaliser against Tullaroan a week earlier, Aidan Talllis got the scoring underway for Lisdowney in the second minute with a free and it was a nip and tuck affair early on until Brian Kavanagh flashed in Lisdowney’s opening goal to give them a 1-3 to 0-2 advantage.

Lisdowney couldn’t quite build on the bright start though and Bennettsbridge dominated the rest of the opening quarter as they knocked over points from all angles to lead 0-8 to 1-4 at the first water break.

Back to back scores from Tallis and Niall Brennan then edged Lisdowney back in front but Bennettsbridge had Sean Morrissey in devastating form as he knocked over four points from play and as a result there was no seperating the sides at the break with the sides deadlocked on a 0-13 to 1-10 scoreline.

Like in the first half, Lisdowney were out of the blocks the quicker and within two minutes of the restart they took advantage of uncertainty in the Bennettsbridge rearguard to grab another goal.

Originally Conor O’Carroll had a shot well saved by Enda Cleere but Aaron Fogarty was quickest to the rebound and he found the net in style.

Again though Bennettsbridge weren’t overly fazed and they replied with 1-2 on the trot with Ciaran Brennan netting on the back of points from Nicky and Jason Cleere.

Conor O’Carroll and Vinny Fitzpatrick then hit back and once again there was nothing to seperate the teams at the halfway mark of the second half.

After a barren few minutes of scoring, the Bridge then looked like they had sealed the victory when team captain Liam Blanchfield scored their second goal in the 53rd minute and with Morrissey and Nicky Cleere knocking over further points, the gap moved out to six points (2-18 to 2-12).

Lisdowney refused to throw in the towel though and on the back of Cleere making a point blank save from Cathal Jordan, the ball arrived into the hand of Brian Kavanagh who nabbed his second goal.

A pair of Nicky Cleere frees looked to have steadied the winners but with a huge amount of stoppage time being played, Lisdowney kept going and after Tallis converted a couple of frees they then won the last gasp penalty where Cleere was the hero.