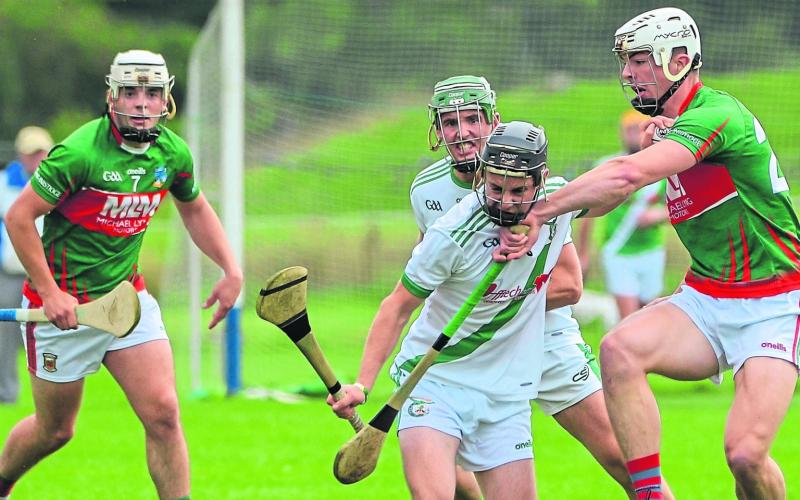 A late goal from Padraig Walsh proved vital as Tullaroan got the better of a tough clash with the Rower-Inistioge in the senior hurling league in Thomastown on Saturday.

The Rower were anxious to pick up the points after losing to James Stephens last time out while Tullaroan wanted to build on their hard earned draw against Lisdowney.

The Rower started well and but for some wayward shooting could have had a healthier lead than three points at half time as they led 0-13 to 1-7.

The repositioning of Padraig Walsh from centre back to centre forward at half time sparked Tullaroan into life and his goal with 10 minutes remaining proved decisive as they ran out winners on a 2-15 to 0-18 scoreline.

Rower-Inistioge started the game very brightly and an Eoin O’Brien free and Jim Ryan point had them two in front inside two minutes.

Shane Walsh got Tullaroan off the mark with a pointed free after a Rower-Inistioge player was adjudged to have handled the ball on the ground, 0-2 to 0-1 after four minutes.

Rower-Inistioge’s early dominance began to reap dividends when the lively Eoin O’Brien fired over 2 points, the first a free after a foul on Joe Lyng and his second after he intercepted a clearance and slotted over from 35 yards to push Rower-Inistioge into a 0-4 to 0-1 lead after 11 minutes.

A long range Jack Walsh (R-I) free was quickly followed by a well worked score when Richie Leahy found Kevin Murphy who pointed from 50 yards and Rower-Inistioge looked to be getting into their stride as they stretched their lead to five with 12 minutes on the clock, 0-6 to 0-1.

However, the Tullaroan men are made of stubborn stuff and Tommy Walsh released Mossy Keoghan who had goal on his mind but Paddy Lyng was equal to the task and deflected his well struck shot over the bar, 0-6 to 0-2.

The score seemed to settle Tullaroan and Mossy Keoghan picked off two more points after good work from Bill Gaffney and Shane Walsh to cut the Rower-Inistioge lead to two after 20 minutes, 0-6 to 0-4.

Jack Walsh extended the Rower-Inistioge lead to four when he guided over two long range efforts in quick succession, the first a 60 yard effort from play quickly followed by a free from 70 yards, 0-8 to 0-4 after 23 minutes.

Shane Walsh picked out Dylan Simpson (T) tight to the left hand sideline and he made no mistake when firing over from 35 yards before Shane Walsh converted a free to reduce the arrears, 0-8 to 0-6.

With 29 minutes on the clock the Rower-Inistioge lead was back out to five after Kevin Murphy, Pat Lyng and Jim Ryan landed a flurry of points, 0-11 to 0-6.

The impressive Mossy Keoghan (T) sent over his fourth point of the half before the equally impressive Jim Ryan (R-I) responded with his third point and the southern side looked like they were heading for the break with a healthy lead, 0-12 to 0-7.

When Shane Walsh broke through the Rower-Inistioge rear guard, he made the most of referee Maurice Flynn’s advantage as he picked out his brother Padraig who had ghosted up the field from centre back and he made no mistake rifling home low to the bottom corner, 0-12 to 1-7 after 31 minutes.

Although the Rower-Inistioge closed out the half with a Jack Walsh free, it felt as though a 0-13 1 1-7 lead was slim pickings for the chances they had created.

Buoyed by their goal late in the first half and a tactical switch which saw Tomás Dunne fill the centre back berth and Padraig Walsh deployed at centre forward, Tullaroan emerged in the second half with far more conviction.

On the restart, Tomás Dunne was picked out with a line ball and fired over from 50 yards. Eoin O’Brien responded for Rower-Inistioge when he slotted over a free, 0-14 to 1-8 after 36 minutes.

When Jack Walsh sent over another long range free after a foul on Shane Ryan and extended the Rower-Inistioge lead to four with 40 minutes played, few in the crowd could have foreseen the Tullaroan storm that was brewing.

Led by Padraig Walsh, Tullaroan kicked for home and reeled off 1-5 without reply in a 10-minute spell.

Shane Walsh started the scoring blitz when he pointed a free before a pair of Dylan Simpson points, one from a placed ball and a great score from play from the middle of the field cut the Rower-Inistioge lead to one, 0-15 to 1-11.

Padraig Walsh was in no mood to cut a shell shocked Rower-Inistioge any slack and he landed two quick fire points to edge Tullaroan into the lead for the first time in the game on 49 minutes.

When the fatal blow came, it was a thing of beauty. Tullaroan keeper Paul Buggy picked out corner back Josh Moore and his long clearance was collected on the half forward line by Padraig Walsh who sensing the Rower-Inistioge defence had been pulled out of shape raced clear and finished to the net, 0-15 to 2-13 after 50 minutes.

A Mossy Keoghan point sandwiched between a pair of Eoin O’Brien frees left the margin at three points with 57 minutes on the clock.

A David Kelly free for Rower-Inistioge cut the Tullaroan lead to two points but Padraig Walsh pointed from 45 yards, bringing his personal tally to 2-3, and Tullaroan held out.