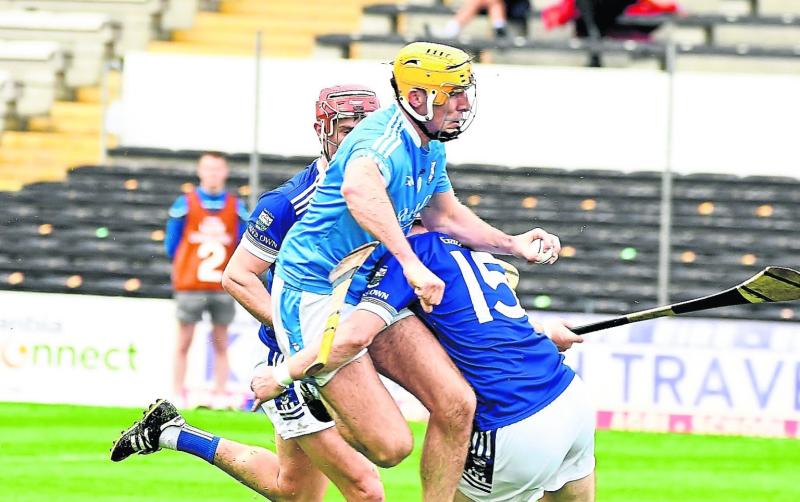 Erins Own and Graigue Ballycallan had to settle for a point each in group A of the St Canices Credit Union SHL after the teams played out a draw in UPMC Nowlan Park on Saturday afternoon.

The high noon clash had many twists and turns with both sides having chances to win and while the result is not ideal for either it does at least give them both a fighting chance of avoiding a relegation scrap when the final round of group games roll around this weekend.

Erins Own of Castlecomer were the side that levelled up the game with Jack Buggy knocking over his second free of the day four minutes into stoppage time but even at that they still had an opportunity to snatch the game when Shane Feehan had a chance but his effort dropped short and referee Owen Beehan blew the full-time whistle shortly afterwards.

Goals in the opening half for Erins Own from Conor Fogarty and John Dowd had them in the driving seat but Graigue Ballycallan still only trailed by two points at the break and they were the better side for the majority of the second half and when Sean Ryan goaled in the 52nd minute they looked primed for victory but Erins Own rallied late on to claim a share of the spoils.

After losing out to Kilkenny city sides O'Loughlin Gaels and Dicksboro respectively in the opening round, the pressure was on both Erins Own and Graigue Ballycallan ahead of this round 2 clash and it was the Castlecomer side that had the better of the opening exchanges.

Despite trailing 0-2 to 0-1 after efforts from Aaron Brennan and Sean Ryan, Erins Own soon turned the tide to lead at the opening water break.

Martin Boran, Eoin Brennan, Jack Buggy and Stephen Daly all found the target for Erins Own during that opening spell and if it weren’t for a couple of careless wides they may have been further ahead.

The water break then stalled the Erins Own surge and Graigue Ballycallan netted the game’s opening goal in the 17th minute after Sean Ryan drilled a pass into the hand of Shane Butler who then offloaded to Murphy who finished past Tom Brophy.

Erins Own were under pressure at this stage after Sean Ryan added on another point but they  quickly found a response when Stephen Daly found Conor Fogarty in space and the Kilkenny start made no mistake in finding the net.

Ryan levelled up matters at 1-6 apiece but Erins Own were soon celebrating again when full forward John Dowd drilled a shot to the net as Martin Fogarty’s side went into the break with a two point advantage.

Erins Own pushed the margin out to three at the start of the second period after Jack Buggy pointed from play but instead of being the catlayst to kick on, the opposite occured as Graigue Ballycallan took control of proceedings.

Five points on the bounce edged Eugene Cloonan’s side into a 1-12 to 2-7 lead with a brilliant sideline cut from Billy Ryan kickstarting a period of dominance before Ryan, Murphy, Tom Dunphy and sub Jesse Roberts extended the margin.

Erins Own sub Sean Buggy then hit a pair of quickfire efforts that left the sides deadlocked at the halfway mark of the second half.

There was still time for a dramatic final quarter and when a mix up in the Erins Own defence resulted in Graigue Ballycallan notching their second goal courtesy of Sean Ryan in the 52nd minute as the game took another twist.

Ryan's goal left his side two points to the good and with the clock against Erins Own it seemed as if time was running out but like they did throughout, the Castlecomer lads had an answer.

Points from Shane Feehan and Jack Buggy pushed Erins Own 2-14 to 2-13 ahead with time almost up before their opponents turned the tables with points from Ryan and Philly Cahill.

Erins Own still had time to knock over an equalising Jack Buggy free as an entertaining clash came to an end with the teams level at 2-15 apiece.