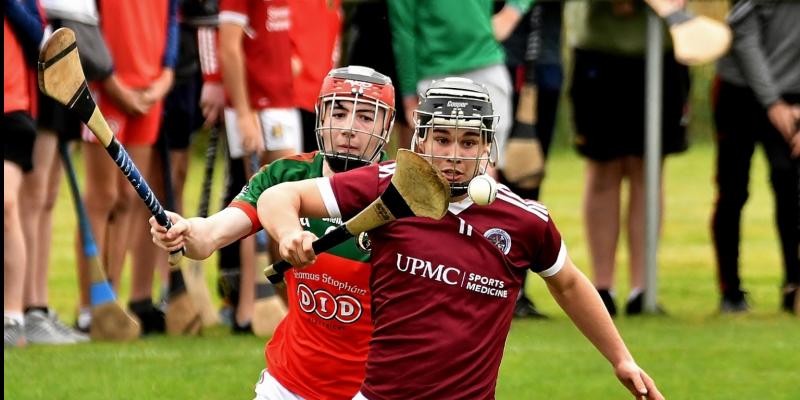 A strong second half from Dicksboro saw them overcome city rivals James Stephens in a highly entertaining Kilkenny Honda Centre Minor A County Semi-Final at the MW Hire Centre, Dunmore on Saturday.

A strong work ethic from James Stephens saw them control the first half and their five point interval lead was deserved. The Boro almost got through for a goal within a minute of the start, but excellent goalkeeping from Daniel Power kept out Harry Shine’s effort. One minute later Shine pointed for the Boro for the first score of the game.

The game really came to life in the fourth minute when Stephan Manogue drifted in from midfield to tap a Shane Glynn delivery to the net. Although Dicksboro responded with points from Kyle Maher and the excellent Matthew Kelleher, three Edward McDermott points kept the Village boys ahead.

Similar to the first quarter, Dicksboro almost grabbed a goal at the start of the second quarter with Daniel Power saving a Declan O’Farrell effort. James Stephens were growing in confidence at this stage with Sam McEvoy and Liam Holohan impressing in their central defensive roles and when Sean Casey got their second goal when set up by Edward McDermott they led 2-3 to 0-5.

The Village boys were showing a hunger and determination that their great rivals were unable to match in the first half and they would have scored a third goal on twenty minutes but for solid Boro defending.

A pointed free from Harry Shine reduced the margin, but James Stephens finished the first half impressively with points from Edward McDermott (free) and Sean Casey to lead 2-5 to 0-6 at the interval.

Some stern half-time words from their mentors saw a sea-change in attitude from Dicksboro in the second half. The introductions of Mikey Raggett and Evan Murphy as half-time subs also helped. So too did the move of Declan O’Farrell out the field from his full-forward position with his work rate key to his side’s impressive second half revival.

Within a minute of the restart Dicksboro grabbed their first goal through Billy Fitzpatrick. Thereafter the winners played with greater confidence and the work rate which was absent in the first half was very evident during the second thirty minutes.

A second Dicksboro goal from Harry Shine after superb build-up play involving Matthew Kelleher, Billy Fitzpatrick and Mikey Raggett edged the winners ahead for the first time. While they continued to battle bravely, James Stephens never recovered from that second Boro goal.

Outstanding defending from Johnny Keane and player of the match Michael Stynes continued to drive the winners forward and that gave the Boro attack plenty of scoring chances.

Mikey Raggett grabbed a third goal for the winners when set up by Harry Shine to see his side ahead 3-15 to 2-9 with time almost up. But credit to the Village boys who continued to battle bravely to the finish and they were rewarded with a Fionn Cody goal.

Dicksboro deserved to win, but it needed a big second half effort to defeat their cross-city rivals. The huge work rate in the first half from James Stephens may well have taken its toll on their players, but a big change in attitude from the winners was ultimately key to their deserved victory at the finish.