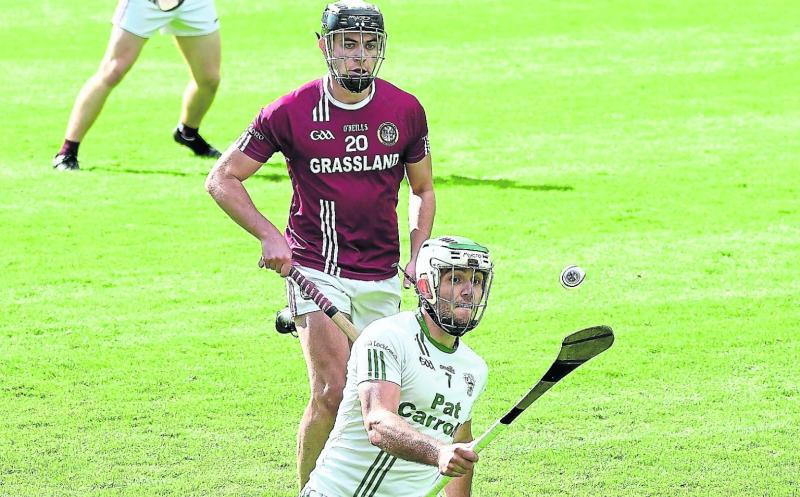 A brace of goals from Jack Nolan as well as an incisive final quarter helped O’Loughlin Gaels to a six point victory over Dicksboro in the St Canice’s Credit Union senior hurling league at UPMC Nowlan Park on Sunday afternoon.

O’Loughlin’s came into the game on the back of a defeat at the hands of Mullinavat and while they were rocking for periods of the opening half, they still found a way to get by their city rivals and make it two wins from three in an enterprising league campaign.

The Andy Comerford managed side currently occupy the shield final spot. Whether they finish there will be decided this weekend, but whatever happens they can be content with their progress thus far.

O’Loughlin’s trailed by three points at the second water break but, inspired by the scoring exploits of Eoin O’Shea and Mark Bergin, the John’s Park outfit worked their noses in front. Jack Nolan’s second goal in the 53rd minute proved to be the catalyst for the victory.

It’s never ideal to lose out in a local derby and Dicksboro will not have been best pleased how the game got away from them in the final quarter albeit they did finish with 14 men after Robbie Murphy was sent off late on.

Only scoring one point in the final 15 minutes will have been a major worry for a Dicksboro side whose performance levels have dipped a little since Colm Bonnar departed his role as selector to link up with his native Tipperary.

All that may be a coincidence but they did need a last gasp Cillian Buckley score to snatch a draw against Clara before falling to O’Loughlin’s and as a result it’s the first time in a number of years that they find themselves in the opening round of the championship.

Dicksboro still had a chance of making the league final before the game and they started the better when opening up a two point lead with efforts from Shane Stapleton and Lee Moore.

O’Loughlin’s continued with the experiment of playing Paddy Deegan at full forward and it certainly had an effect on the game with himself and Alan Phelan involved in a titanic struggle on the edge of the square.

Deegan didn’t get on the scoresheet but his presence in attack kept Dicksboro on their toes and despite a slow start, O’Loughlin’s managed to reel the Dicksboro lead in and the sides were soon level at 0-5 apiece with Mark Bergin knocking over a series of scores.

Dicksboro managed to take advantage on the cusp of the opening water break though with Andy Gaffney grabbing the game’s opening goal after he finished to the net on the back of brilliant build up play from Aidan Nolan and Liam Moore.

As a result Dicksboro led 1-6 to 0-5 but the brief stoppage allowed O’Loughlin’s to take stock and rethink things and they bounced back in style when Jack Nolan pounced on a wayward clearance from Dicksboro goalkeeper Brian Manogue to finish to the net.

Bergin then levelled up matters with his fifth point of the half but Dicksboro kicked on to lead by two at the break after Staunton and Mark Nolan found the target.

O’Loughlin’s were refreshed after the interval and they hit the opening three points of the second half to go ahead on a 1-10 to 1-9 scoreline.

It was proving to be a real topsy-turvy local derby and Dicksboro again battled back with four points on the bounce from the stick of Stapleton helping his side to go three clear.

Dicksboro hit a wall in the final quarter though and their only score came courtesy of youngster Timmy Clifford but there was no stopping a rampant O’Loughlin’s team.

Points from Bergin and Owen Wall drew the sides level before Jack Nolan bagged his second goal on the back of Deegan again causing trouble in the Dicksboro full back line.

Robbie Murphy was then dismissed in an incident involving Cian Loy and any chance of a revival fell by the wayside for Dicksboro as Eoin O’Shea knocked over three late points as O’Loughlin’s secured a 2-17 to 1-14 victory with Huw Lawlor, Jack Nolan and Mark Bergin excelling for the winners.