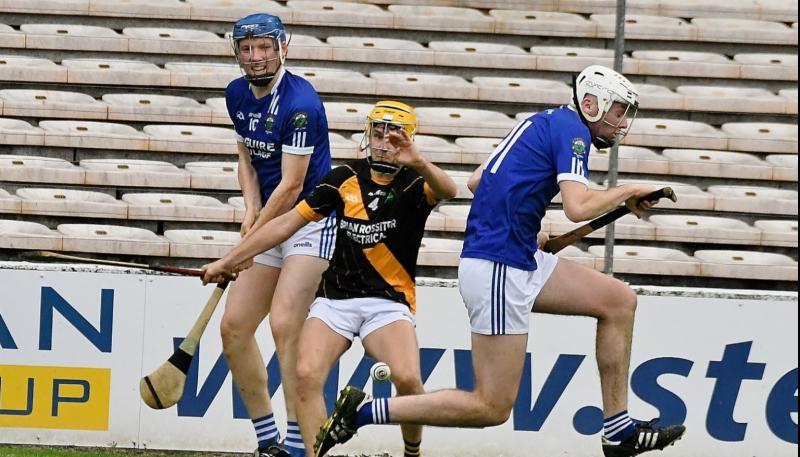 Thomastown comfortably saw off the challenge of Conahy Shamrocks in the third and final round of the intermediate hurling league to finish top of Group A and head straight into the league final where they will meet Glenmore.

Conahy were on the back foot straight from the throw-in when John Donnelly scored the first of Thomastown’s three goals within a minute.

The Southerners beat the same opponents some weeks ago in the Division 2 League Final and the concession of that early goal was a big blow to Conahy.

They did react well though, to that opening Thomastown goal with points from Bill Murphy and Thomas Rice and they more than matched their opponents during the opening 15 minutes of the game.

By the halfway mark of the opening half Conahy led 0-8 to 1-2 with James Bergin’s accuracy from frees along with points from Tom Phelan and Thomas Rice just reward for a strong effort.

Thomastown dominated the remainder of the opening half scoring 1-7 to 0-2 for Conahy.

A strong Thomastown central defensive spine in which the Burkes – Jay and Adrian – stood out and thus ensured that Conahy had to work hard for every score thereafter.

A second goal on 17 minutes for Thomastown from Stephen Donnelly pushed the momentum strongly towards the winners and they rarely looked like losing the tie after that goal.

Edmond Delaney and Bill Murphy added points for Conahy before the interval, but the Donnelly’s – John, Eddie and Stephen - along with Aaron Kehoe grabbed further points for Thomastown which saw them lead 2-9 to 0-10 at the interval.

Thomastown scored the first three points of the second half through Stephen Donnelly, Thomas O’Hanrahan and Brian Staunton with the team’s overall physicality crucial in both winning and retaining possession.

The winner’s slick transition of the ball from defence to attack was at the heart of many of their scores, helped by a superb good first touch in the wet conditions.

A third Thomastown goal at the start of the fourth quarter from Jonjo Farrell was indicative of the winner’s overall dominance.

Eoin Cahill battled bravely at centre half back for Conahy, but it was a difficult afternoon for the Northerners given the overall strength of the winners throughout the pitch.

Tom Phelan scored Conahy’s last point in the 50th minute with Luke Connellan and a brace from Dylan Caulfield adding to the winners tally by the final whistle.

Conahy will be glad of the two weeks break to the opening round of the championship where they will meet Danesfort.

They will be hoping to have a number of injured players back for that game.

On the other hand year is going according to plan for Henry Shefflin and Thomastown with their quarter-final against as yet unknown opponents set for mid-October.

In the meantime they will play Glenmore in the League Final in two weeks as they hope to get their hands on some early season silverware.