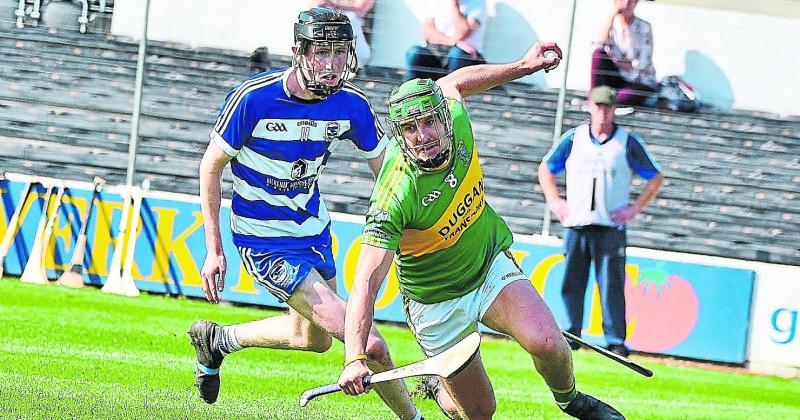 A terrific, wholehearted contest played in horrendous weather conditions saw Glenmore cement their status as group winners as they completed a hat-trick of victories with a hard fought win over a gallant O’Loughlin Gaels.

As a result of Saturday’s win in Ballyhale, the South Kilkenny club have a League final showdown to look forward to against Thomastown on the week ending October 10; more importantly they have also qualified for the championship quarter-final.

After a week of glorious summer sunshine, the expected change in inclement weather did materialise. The resulting heavy wind and rain, unsurprisingly, made it tough going for two teams trying to establish a grip on the game.

Playing with the advantage of the elements throughout the first half, the city side made a very positive start. They led 0-4 to 0-1 after 10 minutes with the excellent duo of David Burke and Billy Leydon both on target, while the Gaels also added points from Conor Kelly (free) and Matthew Russell.

Ian Byrne pointed a free in the 11th minute to narrow the gap, before midfielder Billy Reid struck a well taken goal in the 14th minute - following good work involving both Ethan Phelan and Alan Murphy where he positioned his shot perfectly into the corner of an empty net (1-2 to 0-4).

Following the first water break, O’Loughlin’s replied, two two points in quick succession from Conor Kelly restoring their lead (0-6 to 1-2). They held that narrow advantage until the interval (0-8 to 1-4).

Billy Leydon was a constant handful throughout and he added a pair of points, while Glenmore's tally was added to courtesy of points from Alan Murphy and Ian Byrne (free).

Glenmore started the second half strongly, opening with points from Byrne (free) and a superb effort from play near the sideline by Ger Aylward, but O’Loughlin’s battled tremendously against the strong elements throughout the second half - they regained the lead in the 38th minute courtesy of points from Leydon, David Burke and another Conor Kelly free (0-11 to 1-7).

However, the most significant moment of the match arrived in the 41st minute, when Eoin Murphy stood up to a free in front of his own full-back line. The strength of the wind at his back carried his monster long range effort right the way through at speed to the opposition goalmouth.

The powerful force of the elements saw the sliotar travel beyond the outstretched stick of the probing Ger Aylward and past goalkeeper Ben Maher (2-7 to 0-11).

The goal was a shock to O’Loughlin’s, but they did reply. Points from David Burke and Conor Kelly (free) restored parity heading into the final quarter (2-7 to 0-13).

However, Glenmore were at their strongest throughout that final quarter. Substitute Darragh Hartley made a huge impact, providing them with a new lease of life.

Hartley scored a point and worked tremendously hard, covering acres of ground while the Murphy brothers, Eoin and Shane, stood strong with Shane, in particular, solid throughout.

Glenmore pointed five times in succession between the 45th and 51st minutes, Liam Hennessy, Darragh Hartley, Ethan Phelan, Mark Aylward and Alan Murphy all found their range, helping to open up a five-point advantage (2-12 to 0-13).

O’Loughlin’s narrowed the advantage with points from frees from both Conor Kelly and Ben Maher but, despite the best efforts of Jamie Young, Conor Kelly, Billy Leydon and David Burke, they couldn't manufacture a levelling goal as Glenmore held on to complete a hat-trick of group victories.