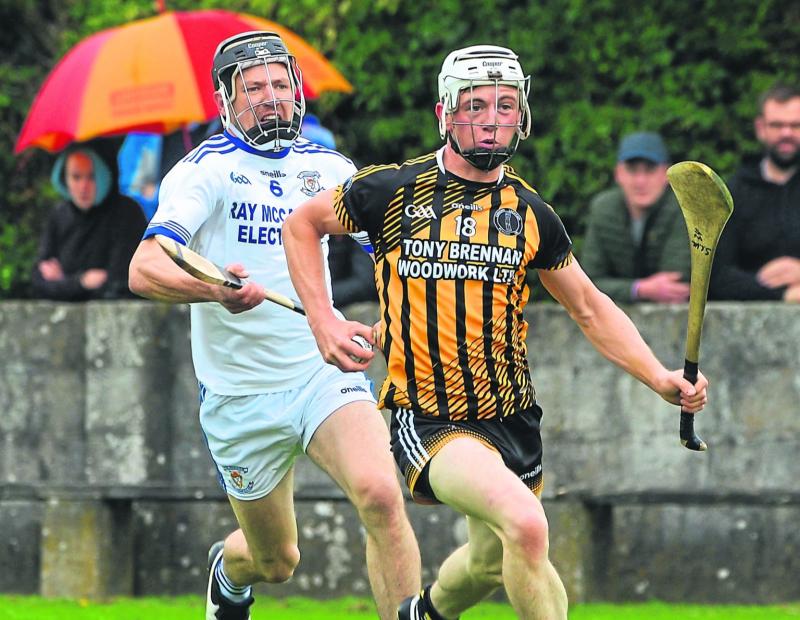 A stirring second half display set the platform for St Lachtain’s to emerge four point winners over Fenians at a wet and windy Ballyragget on Sunday afternoon.

The Freshford based outfit had trailed early on after Mark Webster netted an opening half goal for the Fenians but helped by James Maher who was excellent throughout for the winners, Lachtain’s soon reeled their opponents in and despite trailing at the interval they took complete control in the second half.

That control for Lachtain’s was hugely helped by the 36th minute red card to Fenians sub Niall Carroll.

Carroll was only on the pitch a couple of seconds before he engaged in a scrummaging of shoulders before pulling on his marker and after communicating with his team of officials, referee John Kennedy had no choice but to send the Fenians star off.

It was the second dismissal in three games for Fenians and this one proved particularly costly as the teams were deadlocked at 1-9 apiece when the incident occurred in the opening minutes of the second half.

Not long after the red card Lachtain’s had their second goal when Darragh Maher shot past James Dermody and from that point on it was all plain sailing for the winners.

Fenians made the brighter start and after Pa Duggan pointed from play in the third minute, they then struck for goal two minutes later when a long sideline cut found it’s way to Conor Tobin and after the corner forward stepped inside the challenge of a couple of defenders he was eventually brought down in the square and a penalty was awarded.

Mark Webster stepped up and made no mistake in drilling the sliotar to the bottom corner as Fenians made a dream start.

Shane Donnelly almost replied in style down the other end when he had a shot saved before Liam Hickey got his side on the scoreboard in the 7th minute.

The sides then swapped scores until the opening water break as Fenians maintained a four point advantage.

The break in play suited Lachtain’s and they got three points on the bounce after the resumption with Cathal O’Leary, Alexander Rafter and Shane Donnelly all finding their range.

A few mini tussles then broke out between the sides as things threatened to boil over before Fenians retook a three point lead.

Lachtain’s then had a lifeline two minutes before the break when Cian Dawson pounced for a goal to level the game.

Fenians weren’t down for long though and after points from Webster, Conor Tobin and Michael Carroll it was them who led by two at the interval.

Lachtain’s were a different animal in the second period though and in Liam Hickey and John Fitzpatrick they knocked over two points to deadlock the sides at 1-9 apiece.

Then came the turning point of the contest when Niall Carroll was sent off for Fenians and Lachtain’s took full advantage as they scored 1-2 on the back of it.

Hickey maintained his scoring threat with a pair of points before Darragh Maher netted the second goal for the Freshford lads.

Webster stemmed the tide briefly with a free but it turned out to be his side’s only point of the half as Lachtain’s continued to dominate with Hickey hitting three superb efforts that pushed his side into a seven point lead.

Fenians did grab a late stoppage time goal via Darragh Tobin but the damage had already been done as St Lachtain’s came out on the right side of a 2-14 to 2-10 scoreline.

The Freshford side will now face John Lockes in the opening round of the championship while Fenians will meet Dunnamaggin.