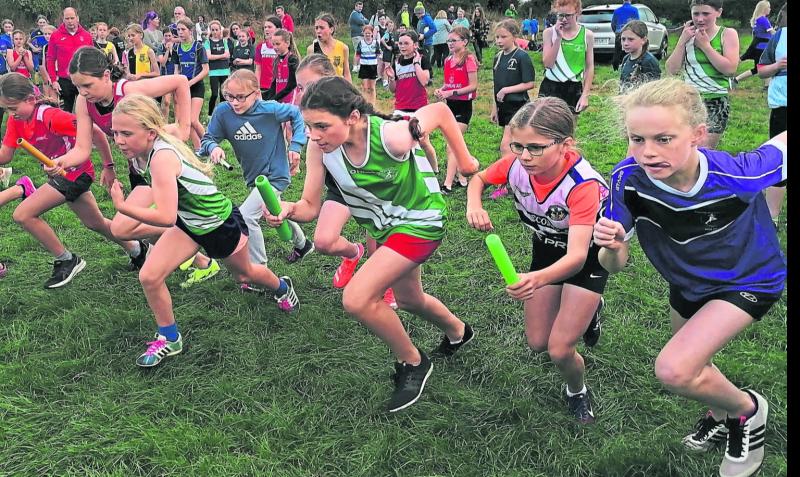 It was a busy week of athletics, with three events being held across seven days.

On Friday night, the Pink Rock in Rosbercon was the place to be for the county road walks while, on Saturday, local attention was fixed on Derby, England where Gowran’s Billy Coogan was racing for Ireland in the SIAB international. Finally, Sunday saw the county relays and 2020 senior cross-country championships take centre stage in Conahy.

The walks at the Pink Rock saw large numbers take place amid superb organisation from St Joseph’s AC, spearheaded by Maggie O’Connor. Balmy conditions of 20 degrees made for a pleasant event.

Two seasons merging into one is the best way to describe the Kilkenny County Championships which were held in Conahy last Sunday. The juveniles gathered for the 2021 county cross-country relays while the seniors were determined to finish off the 2020 cross-country season, with the unusual occurrence of last year’s championship being propelled into this year.

The clouds, bursting at their seams, managed to hold off their rain for the duration of the county senior in Conahy.

The women’s race was a St Senan’s affair. Bronagh Kearns on the back of a phenomenal track season, (where she finished seventh in the national senior 1,500m) left no doubt in anyone’s mind as to her fitness levels.

While Bronagh has been racing cross-country since she was nine, Sunday was actually her first individual county senior cross title.

The 2021 Cross Country will be held at the end of November and with Lauren Dermody (Castlecomer) scheduled to run, it will be a battle of the 2019 and 2020 champions. There may also be others in the mix too.

Sophie Jackman and Aoife Allen are some of the young St Senan’s members who have transitioned to senior level running.

Running together for most of the race, it was a sprint finish with Sophie claiming second and Aoife third. Michelle McDonald backed the team up for a fine team win for St Senan’s, their fourth in a row.

It was somewhat disappointing that many clubs in the county failed to field a team, in what is usually a well contested race. Hopefully that will change for the 2021 race in November.

Unlike the women’s event, the senior men’s race was well represented, with 39 athletes lining up at the start. Coming into these championships Kilkenny City Harriers (KCH) had won eight senior titles in a row.

The 2019 champion Brian Maher was absent with injury as was club mate Thos Hayes. It was the turn of 2019 runner up and Irish European Cross Country team member Eoin Everard to stake his claim on the gold medal winning spot.

Racing on the lands of clubmate and rival Brian Maher, without having to battle him, was somewhat unusual for Eoin. A guest athlete from Wexford did give him the opportunity to test his fitness, but Eoin took the lead after 400m and was to remain there for the entire race.

For the first lap Niall Sheehan (Gowran), James Kelly (Castlecomer), James Ledingham (KCH), Conor Rochford (St Senan’s), James Morrissey (Castlecomer) and Dean Rowe (Gowran) formed a peloton behind Eoin. This broke up before the 2km mark had been reached when Niall Sheehan broke away and tried to chase down Eoin Everard.

It was not too long before James Kelly did the same, leaving Ledingham, Rochford, Morrissey and Rowe racing each other.

Over the next few kilometres, these too found their race pace and for most of the second half of the race, the top seven athletes were left running solo, trying to catch the athlete before them.

Running solo in a 10km cross-country race is something no athlete likes to find themselves in. It is always wise to try and hang on to a group, the effort and pain usually being rewarded with a good solid performance. The real battle was for the eighth to 11th position between the two KCH athletes Padraig Ruane and Eamonn O’Connor and St Senan’s Darragh Buckley with St Joseph’s Joey Duggan having a solid run.

With Buckley competing in his first ever Kilkenny championship race, he found himself moving from 15th to ninth place after 4km. The rhythm of the group took ensured all the athletes performed well – the battle had endured for 6km.

Kilkenny City Harriers took the team title, as indicated above, their ninth successive crown. St Senan’s will have two of their stronger athletes back for the November race. However, if Maher and Hayes manage to shake off their injuries in time to regain fitness it is going to be tough to challenge the city team. Gowran were second in the team section with St Senan’s third, two points ahead of St Joseph’s.

It was as anticipated, the relays which attracted a large number of juvenile athletes.

The St Senan’s AC Open cross-country and county relays have for a number of years now, marked the first and second events held of any new cross-country season.

The relays, in many ways, assist in a gentle ease into running faster on country terrain. For many it will be their first cross-country race. More than ever this year, such was the case. Those currently under-11 will never have competed in a cross-country race before and most under-13s will probably find themselves in the same predicament. Successive lockdowns have meant it was impractical or impossible for clubs to have training sessions and racing just did not happen.

This year was different. The St Senan’s event ran off as normal last weekend - following the success of that, the County Board decided to ease restrictions. The event was pretty much back to normal.

After Sunday’s relays KCH now lead the challenge for best cross-country club with eight points. Gowran are second with five and a half points and Senan’s third with five points. The next two Sundays will see more points accumulated for all clubs and the results will change from Sunday to Sunday until an overall club winner is formally announced.

The annual competition for the best juvenile club is something that most clubs use as a motivation tool for athletes to compete. This year will be no different.

KCH, as hosts of Sunday’s event, had large numbers as did Gowran, who also have a large membership base. KCH had 11 teams competing with Gowran fielding 15 teams.

With most of these teams participating in the younger ages, it was no wonder that these two clubs did well in the under-11 and 13 age groups. Between them they took nine of the 12 sets of medals on offer.

St Senan’s dominated the under-17 age group and with both their under-15 teams, decimated due to hurling or camogie matches, were somewhat down on numbers in what would normally be a strong age group for them.

St Joseph’s were very impressive in the girls’ under-15 race, with Lilly Ryan eating up ground on the final leg passing both KCH teams, to clinch victory. In the boys’ under-15 race Thomastown had an unexpected victory over Gowran.

Next Sunday will see the county even age championships being held in Ballycurran, Tullogher, where the longer distances will see a different set of talent emerging from all clubs.

Kilkenny has always had a very strong tradition of race walking. Going back for over 50 years the county has had countless national titles, athletes on international teams and strong representation from clubs at various events.

The annual county road walks, normally held in June was held last Friday night at the Pink Rock. Left in the hands of Maggie Helen O’Connor and her team of event organisers, this event took on a new lease of life.

Six years ago it was decided to open the event to guests, with high calibre athletes from Waterford and Wexford racing in the event. This year teams travelled from, West Waterford, Wexford, Newbridge and even Cork, while senior and masters athletes came out of retirement.

Both St Senan’s and St Joseph’s AC have been very active members of the Robert Heffernan Race Walking Academy during the lockdown. A fantastic initiative set up by international and Olympic race walking athletes to further the sport of race walking and its support thereof.

Creating a team environment for training with the standard of race walking in the country rising substantially. It is perhaps something other events should look to for inspiration.

The senior event was won by West Waterford AC guest and former world youth champion Kate Veale. Maggie Helen herself took the county women’s title. John Joe Lawlor took the men’s county title. The cup for the best overall club in the county for race-walking (based on track and field and road walks) surely now goes to St Joseph’s’ AC.

In the juvenile races, from the county Lily Ryan (St Joseph’s) was impressive as was Tadgh O’Callaghan (St Senan’s).