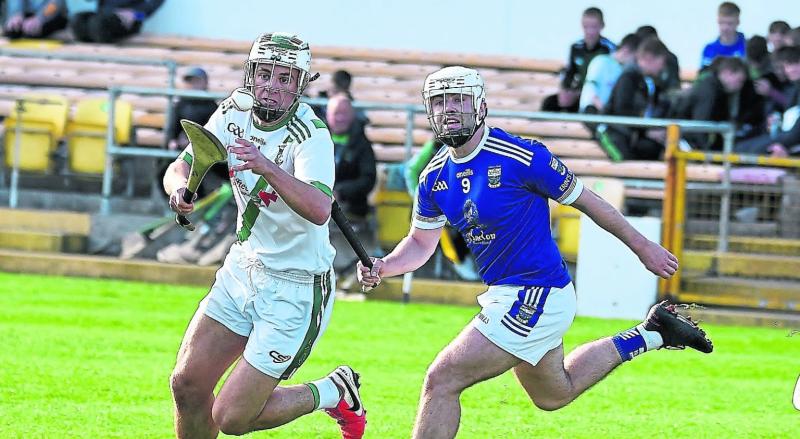 Playing their best hurling for some time, Tullaroan deservedly earned a place in the senior hurling championship quarter-finals when beating Erin’s Own (Castlecomer).

A strong second quarter performance when favoured by the breeze at UPMC Nowlan Park was key to Tullaroan’s victory on Sunday.

So too were a couple of superb individual performances, with Padraig and Shane Walsh outstanding all through the game for the winners.

The determination and work ethic which Tullaroan brought to their game in the second quarter left the ’Comer men with a real challenge in the second half.

Two points from Shane Walsh for Tullaroan after Shane Feehan had opening the scoring for Erin’s Own set down a marker for what was to be a highly entertaining game. Tommy Walsh (Mountgale) added a Tullaroan point from an acute angle before we were treated to three goals in a two-minute spell.

Jack Buggy grabbed the first when he reacted well to a breaking ball to give Paul Buggy in the Tullaroan goal no chance.

Straight from the puck-out, Martin Keoghan gained possession and shot past Tom Brophy in the Erin’s Own goal.

The ’Comer side’s response was impressive as, one minute later, John Dowd grabbed his side’s second goal when set up by Stephen Daly.

It was expected that Erin’s Own would push on after scoring that second goal. Not so, as Tullaroan responded impressively scoring nine points without reply to lead 1-14 to 2-2 heading towards the interval.

Erin’s Own were struggling to contain a rampant Tullaroan at that stage with Padraig Walsh majestic at centre half-back, plucking balls out of the air time after time and even popping over a delightful point on 27 minutes.

Shane Walsh continued to torment the Erin’s Own rear-guard and got plenty of assistance from Dylan Simpson, Mossy Keoghan and Tommy Walsh (Mountgale).

Stephen Daly eventually slowed the Tullaroan momentum with a fine point for Erin’s Own on the call of half-time. That left his side trailing their opponents by eight points at the interval (1-14 to 2-3).

The exchanges were far more even in the third quarter as Erin’s Own improved their work rate. They got the first score of the second half - a point from midfielder Martin Boran, who had a fine second half. However, any momentum they were building was undone on 42 minutes when Dylan Simpson blasted to the Erin’s Own net when set up by Shane Walsh.

With 13 points now separating the teams the pressure was on Erin’s Own to respond quickly. Their efforts were rewarded with a third goal in the44th minute from the alert Jack Buggy. The margin was back to seven points at the second water-break when Conor Fogarty, now operating further up the field and Shane Walsh (free) exchanged points.

The excitement kicked up a couple of notches at the start of the fourth quarter when a long ball into the Tullaroan full-back line was gathered by Stephen Daly who shot to the net. The low sun at that stage of the game was proving tricky for the Tullaroan defence.

Erin’s Own had Conor Delaney situated at centre half back at this stage and his defending was key to his side’s fourth quarter rally. A Jack Buggy free brought the margin back to three points with five minutes of normal time remaining, setting up a grandstand finish.

John Walton pointed for Tullaroan to briefly stem the Erin’s Own fight-back, but not for long as Jack Buggy (free). When Conor Fogarty chipped in with a point for the ’Comer men that left just two points between the teams.

With the pressure now on Tullaroan up stepped Shane Walsh to point a brace of frees after some careless Erin’s Own fouling. In a frantic finale Jack Buggy left a goal between the teams with another pointed free, but Tullaroan were now sensing victory.

It was secured with points from Tomas Dunne, who had a great second half, and substitute Jim Moore.

Tullaroan deserved their win, but they will need to reflect on the concession of the four goals. The team’s work ethic was superb for most of the game and that was key to giving them a decisive edge over their opponents.