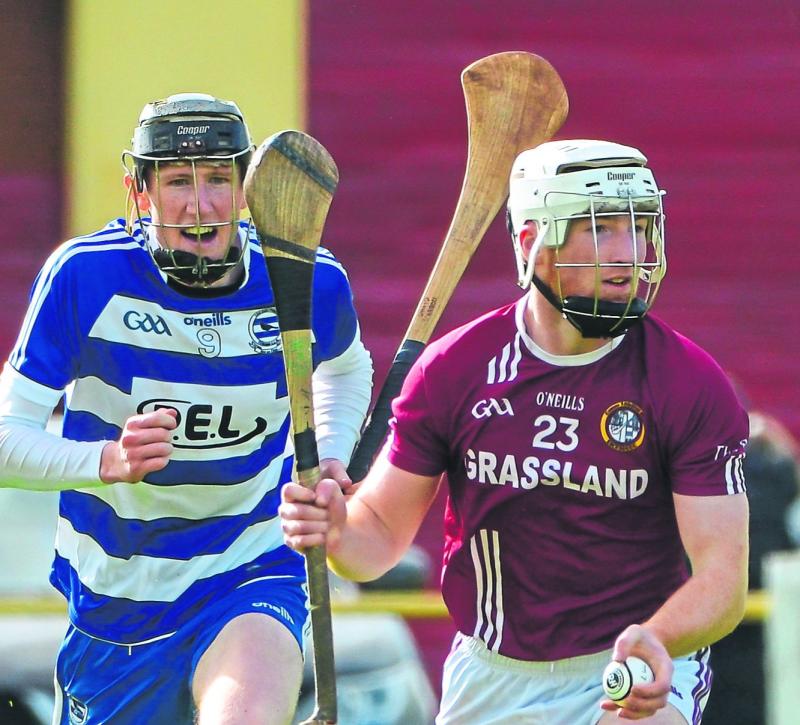 Dicksboro’s Timmy Clifford looks ahead with David O’Carroll (Lisdowney) in pursuit during the opening round of the championship on Sunday. Picture: Billy Culleton

Dicksboro booked their place in the quarter-finals of the senior hurling championship after running out narrow winners over Lisdowney in a thrilling in Freshford on Sunday afternoon.

After a tightly fought opening period, Dicksboro looked in complete control when leading by nine points at the halfway mark of the second half with Bill Sheehan getting the goal for the city side.

Lisdowney, however, have proven to be very stubborn opponents throughout the league and they were never likely to give up easily in this knockout championship clash. So it proved as they battled back in the final quarter.

A goal from Conor O’Carroll kickstarted the Lisdowney revival. With Michael Kenny, Vinny Fitzpatrick and Aidan Tallis all knocking over points they brought the deficit back to four points by stoppage time.

David O’Carroll scored a second goal for the 2020 intermediate champions but unfortunately for them they ran out of time as a relieved Dicksboro side came through.

Dicksboro have struggled to find the form that led them to last year’s county final, but they started much the better. They almost had a goal within seconds of the start with Lisdowney stopper Liam Dunphy producing a fine save.

Shane Stapleton, Andy Gaffney and Bill Sheehan then all knocked over points as the ’Boro raced into a 0-4 to 0-0 lead.

A brace of Aidan Tallis frees, as well as efforts from play by Niall Brennan and Conor O’Carroll, brought Lisdowney back into the contest as they trailed by two at the opening water break.

The teams then swapped scores until the break as Dicksboro maintained a narrow 0-9 to 0-8 advantage.

It looked set for an end to end second half but when Bill Sheehan knocked in a 38th minute goal, all of a sudden the ’Boro had opened up a 1-14 to 0-9 lead after Andy Gaffney, Timmy Clifford and Shane Stapleton had earlier knocked over points.

Conor O’Carroll struck for a Lisdowney goal in the 42nd minute and this inspired a bit of momentum that got them back into contention.

Even still, with Andy Gaffney, Mark Nolan and Shane Stapleton all finding the target, Dicksboro they looked set to hold out for a relatively comfortable success but Lisdowney had other ideas.

David O’Carroll netted his side’s second goal three minutes into overtime to get back within a point of Dicksboro. Although they had one more chance to force extra-time they ultimately couldn’t make it count as Paraic Fanning’s ’Boro outfit held on to advance.