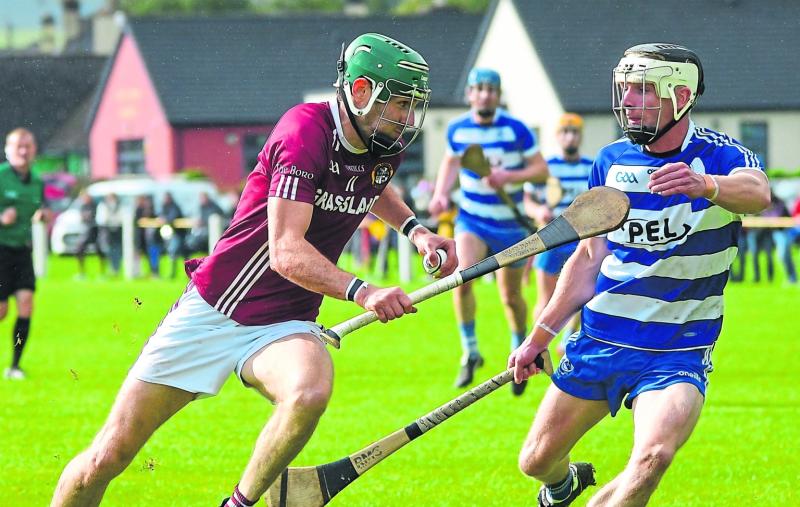 After a narrow win over Lisdowney in the first round of the championship Shane Stapleton and his Dicksboro team-mates will be looking to find form against James Stephens . Pic; Billy Culleton

It’s all set for the busiest weekend on the Kilkenny GAA calendar thus far with games in the senior, intermediate and junior hurling championships.

After the completion of the league and shield finals in the senior grade, it’s all about knockout fare over the course of the next month.

The quarter-finals will be held over Saturday and Sunday afternoons with a couple of mammoth clashes in store.

Up first is the meeting of Mullinavat and O’Loughlin Gaels in Ballyhale on Saturday afternoon at 4pm - what an interesting game this looks on paper.

In some ways Mullinavat have proven to be the surprise packages of the entire championship as some people had predicted that they could be in a relegation battle.

Mullinavat beat O’Loughlin Gaels in the earlier part of the league but it’s a much different O’Loughlin’s animal they are facing into now.

The St John’s Park outfit have since beaten Dicksboro as well as the Rower-Inistioge in the opening round of the championship.

Paddy Deegan has been used at full-forward throughout this year’s campaign for O’Loughlin’s. If he’s on form it’s hard not to see the city side turning the tables on Mullinavat.

Attention will then switch to O’Loughlin’s home ground early on Sunday afternoon as Clara and Tullaroan face off.

Under normal circumstances Clara would come into this game as expected favourites, but after losing out in the league final to Bennettsbridge last Sunday and the possible loss of injury to Lester Ryan, Tullaroan will be eyeing an upset.

Tullaroan have grown throughout the campaign and apart from the heavy defeat they took at the hands of Shamrocks they have been in contention in all of their games. Last Sunday’s victory over Erin’s Own’s was their most impressive outing to date.

Both Shane and Padraig Walsh have been in sparkling form for Tullaroan this term but they may need more from the likes of Mossy Keoghan if they are to advance.

It’s a game that should go down to the wire but in Chris Bolger, Liam Ryan and Conor O’Shea, Clara may just have the firepower to reach the semi-finals.

Next up is a cracking double header of action in UPMC Nowlan Park with the all-city clash of James Stephens and Dicksboro getting things underway at 2.15pm.

Both teams are chasing a bit of form and trying to find themselves, but the Village look to be further down that road than the ’Boro.

A shield title victory over Mullinavat will have barely registered among the great wins on the Kells Road but it was another game to get into their legs and they look to be improving the longer the season goes on.

James Stephens are still lining out without Conor Browne though and although his loss hasn’t been keenly felt as of yet, they would still love his availability for a game of this magnitude.

Dicksboro were impressive winners in their opening league game against Erin’s Own but ever since they have struggled against O’Loughlin Gaels and Clara. They just about held on for victory in their championship first round meeting with Lisdowney last Sunday.

The ’Boro do have a number of injury worries at the moment - and their time will come again as they have a golden generation of minor players coming through - but in Cian Kenny, Eoin Guilfoyle, Niall Brassil and Luke Scanlon, James Stephens look to have all the aces as they look to get back to another semi-final.

It’s a case of leaving the best till last on senior championship weekend with the meeting of Bennettsbridge and Shamrocks at 4pm.

The league and county champions meet in what promises to be a glorious clash.

Bennettsbridge have had a faultless campaign thus far, winning every league game they played. They will bring huge momentum into this encounter.

For the Shamrocks it’s been the opposite as they’ve stuttered their way through a league just like they did in 2020 - but look how that ended for them.

They got their season back on track when beating Graigue-Ballycallan last week, but they were given a few frights in that game too.

It’s a game neither side will have wanted at this stage, even more so after only facing each other in the opening round of the league.

Despite conceding six goals in the final quarter of that contest, Bennettsbridge caused huge problems with their style of play for Shamrocks. If they have tightened up at the back sufficiently they may just have in them to knock out the defending All-Ireland champions.

Last week’s beaten sides Erin’s Own, Lisdowney, Graigue-Ballycallan and Rower-Inistioge all have a week off before their relegation playoffs.

In the intermediate grade the league and shield titles will be decided on Saturday with Thomastown and Glenmore clashing in the league final at Kilkenny GAA HQ while Carrickshock and St Martin’s play out in the shield decider.

As well as that there are four opening round games in the championship with Fenians (Johnstown) meeting Dunnamaggin on Saturday before St Lachtain’s (Freshford) face John Lockes (Callan), Conahy Shamrocks collide with Danesfort and Young Irelands take on O’Loughlin Gaels on Sunday.

There are also a number of games in the junior grade with St Patrick’s (Ballyragget) v Tullogher-Rosbercon looking the standout tie on a bumper hurling weekend in Kilkenny.