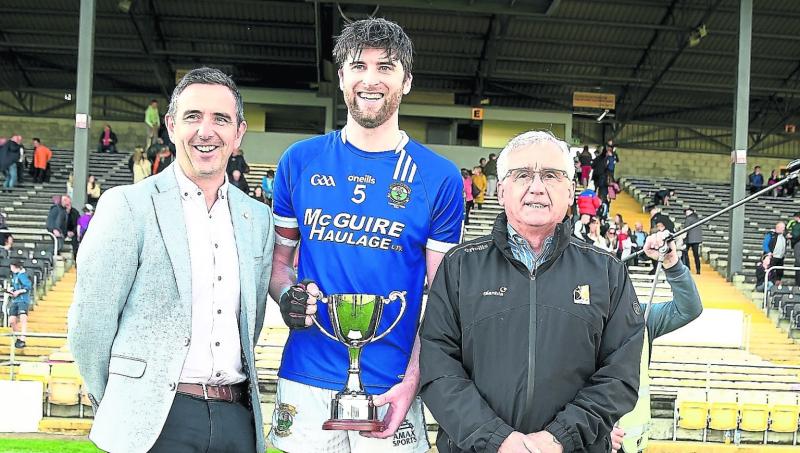 Two teams with strong credentials for the 2021 intermediate championship honours, Thomastown and Glenmore met in the league final.

After a close game, a strong third quarter finish from Thomastown proved key to their three point victory over Glenmore at UPMC Nowlan Park.

With championship quarter-finals scheduled for next weekend, neither side took any chances with injured players.

Eoin Murphy was absent for Glenmore with a leg injury and is a doubt for next weekend. Thomastown rested Richard O’Hara, Brian Staunton, John Donnelly and Jonjo Farrell, but will hope to have all four players available next weekend.

Glenmore started well and were rewarded with an Ian Byrne goal on five minutes. Byrne was excellent all through the game and also impressed with his free taking.

At the other end of the pitch Thomas O’Hanrahan put in a strong performance for Thomastown, while Robbie Donnelly’s free taking was flawless.

Twice in the opening quarter Glenmore goalie Tomás Dunne came to his side’s rescue with a brace of excellent saves leaving his side ahead 1-5 to 0-6 at the first water-break.

Three points in as many minutes at the start of the second quarter from Thomas O’Hanrahan edged Thomastown ahead. He added another moments later, with Ian Byrne always posing a threat for Glenmore as he continued to find the range.

Shane Murphy playing at centre half back had a fine game for Glenmore and twice in the first half he broke from his defensive role to slot over two points, with Philip Roche contributing another point for the Southerners from midfield. This saw Glenmore ahead 1-10 to 0-11 at the interval.

Sub Robbie Fitzgerald made an immediate impression when introduced for Glenmore, pointing in the first minute of the second half, but once Robbie Donnelly pointed a free for Thomastown two minutes later it saw the winners take a grip on the game during the third quarter.

Careless tackling by Glenmore saw Robbie Donnelly point a brace of frees, but the finish to the quarter brought the first clear margin between the teams. A beautifully struck line ball from Robbie Donnelly flew over the Glenmore crossbar, to be followed by a Dylan Caulfield point.

The key score came at the end of the quarter when Thomas O’Hanrahan shot to the net to see Thomastown lead 1-17 to 1-13.
Robbie Donnelly and Ian Byrne exchanged points at the start of the fourth quarter, with strong play from Dylan Caulfield and Dylan Waugh adding two further points for the winners.

Glenmore were given a glimmer of hope in the 58th minute when Robbie Fitzgerald scored his side’s second goal, but time was against the Southerners. Pointed frees from Robbie Donnelly (T) and Alan Murphy (G) saw Thomastown record a deserved win and a boost going into next weekend’s quarter-final.

For Thomastown, the victory saw them capture their second trophy in a couple of weeks. They are clearly a team with plenty of momentum right now. Best for the winners were Jay Burke, Adrian Burke, Robbie Donnelly, Thomas O’Hanrahan, Dylan Caulfield and Dylan Waugh.

Glenmore were not too far behind their opponents and may well have a big say yet in the destination of the 2021 intermediate championship title. They were best served by Ian Byrne, Shane Murphy, Philip Roche, Alan Murphy and Sean Duggan.