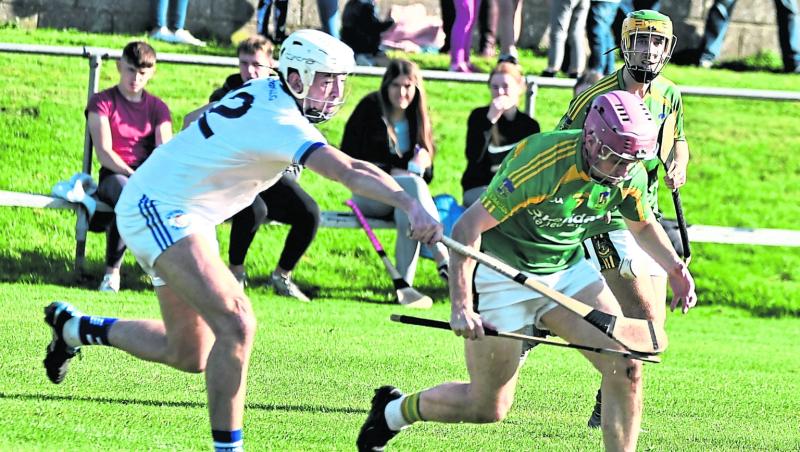 Ian Walsh (Dunnamaggin) finds his way out of defence blocked by Willie Brennan (Fenians) during their intermediate clash in Bennettsbridge Picture: Willie Dempsey

They had to ensure a relegation final last year before retaining their intermediate status, but the Fenians (Johnstown) made sure they’d avoid the drop at the first hurdle in 2021!

That’s not to say the North Kilkenny side didn’t give their supporters a few anxious moments as they beat Dunnamaggin in sunny Bennettsbridge. Trailing by a point with the game in the last grains of stoppage time, the Johnstown men poured forward with one last attack down the left. Pushed on by Kieran Grehan they drove the tough Dunna’ defence, the ball moving through the hands of Niall Carroll and Sean Tobin as they looked for a way through.

When Tobin popped off a high pass that looped above the head of Conor Tobin, all looked lost - but somehow Tobin reached up through a sea of arms to bat the sliotar to the net.

Cue an explosion of joy from the players, subs and supporters, who danced with delight on the sidelines.

The goal was a reward for their never-say-die spirit, but the Fenians will be the first to admit they got out of jail in this one.

Second best to an impressive Dunna’ for long spells they scrapped their way back into the game but, for long spells, looked to be heading for the relegation semi-finals.

Both sides were keen to make up for below-par League campaigns - Dunna’ won one game, while the Fenians finished pointless - but it was the Fenians who made the first move, albeit with a bit of luck. Conor Tobin trooped back into his own half to take a ninth minute free, but got a better return than he anticipated when the sliotar flew past a forest of players and ended up in the Dunna’ net (1-3 to 0-3).

Rather than panic, Dunnamaggin began to change their style a little. Some pointed frees from Denis Walsh got them back in the game, but Mark Webster curled a free over to ensure Johnstown still led at the first water break (1-4 to 0-5).

It was all change in the second quarter, as Dunnamaggin reshuffled their pack and took the game by the scruff of the neck.

Playing against the breeze they negated James Dermody’s long puck-outs by dropping Andy Hickey back into the midfield/half-back sector, which helped to shore their defence up. Keeping the ball flowing one way the skill of players like Eoghan Kearney, Hickey, Walsh and John Fitzpatrick meant they kept the pressure on Fenians which, in turn, helped create chances. Three points in quick succession from Hickey, John and Darren Fitzpatrick had them level by the 22nd minute - they could have gone ahead soon after, when Ray Cody and John Fitzpatrick teamed up to send Darren Fitzpatrick flying through on goal, but his shot flashed wide of the far post.

They shrugged off that miss, finishing the half strongly. Michael Cody drove out of defence to provide John Fitzpatrick with a pass he turned into a point, while Daragh O’Keeffe ended a surge forward with a good score. One more from Fitzpatrick and Dunnamaggin had turned the corner, taking a three-point lead into the break (0-12 to 1-6).

The leaders were keen to kick on after the restart but couldn’t find the same rhythm. They hit four wides before Walsh opened their account with a 40th minute free - that allowed Mark Webster (two frees) to narrow the gap before Webster took a short free and teed up Kieran Grehan to leave the bare minimum between the teams with 19 minutes left (0-13 to 1-9).

The Fenians had been solid in their approach to getting back into the game, their defence keeping them in the fray. James Dermody saved his side when he dashed from his line to close down John Fitzpatrick’s 51st minute shot - a goal at that stage could have been decisive.

Michael Cody, galloping from defence, pushed Dunnamaggin two clear (0-16 to 1-11) as the game ticked into the final five minutes but the Fenians kept pushing, clawing their way back to level terms through Conor Tobin and Webster (free).

The game was in the melting pot as the sides prepared to duke it out in the closing stages. One more free from Denis Walsh edged Dunnamaggin ahead in the final seconds of normal time. It was an advantage they held until well into injury-time - but Conor Tobin’s final act saw the Fenians snatch victory from the jaws of defeat.