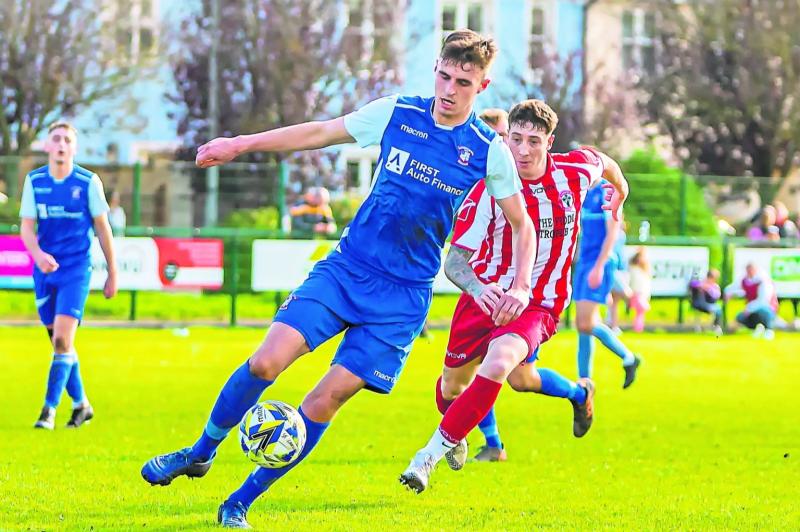 Freebooters booked their place in the 2021 Pat Maher Shield final after running out penalty shootout winners over near neighbours St Canice’s in the semi-final on Sunday.

The clash at the Fair Green was tightly fought throughout although Freebooters did let a two goal lead slip and almost paid for it in the end.

Freebooters were looking to qualify for their second successive final and although they were given a huge fright, they will be massively relieved to seal a place in the early season decider.

It only took the hosts eight minutes to open the scoring with Jason Hennessy breaking the deadlock and it was that goal that separated the sides at the half-time break after an exciting half of football. Freebooters’ advantage was quickly extended in the opening minutes of the second half when they won a penalty which was converted by Andy Walsh.

The Blues looked to hold all the aces at that juncture and they may have felt that they had one foot in the final but they were soon thrown on the backfoot as St Canice’s rallied after a poor start.

Not taking in the difference in league positions between the sides, St Canice’s duly pulled a goal back when Owen McCormack found the target. Luck was on the Division Two outfit’s side as they forced extra-time when Harry Jordan scored the equaliser.

The stalemate continued throughout the extra period with both sides seeing shots rebound off the woodwork before the game went all the way to penalties.

It was in the spot kicks that Freebooters eventually made their favouritism count with their goalkeeper producing three critical saves as they saw off a gallant St Canice’s side 4-3 on penalties.

The Kilkenny city side will now await the outcome in the other semi-final which pits Highview Athletic against Thomastown United.

On the league front, there was plenty of excitement with a number of games down for decision over the course of the weekend.

There was no shortage of action as Newpark and Highview Athletic shared nine goals in an end to end tussle in the St Canice’s Credit Union Premier Division with Newpark coming away 6-3 winners.

Henry O’Neill, Ryan Maguire, Jack Sheridan and Joey Walsh were all on the scoresheet for Newpark as they kicked off their league season in some style.

That was the sole top flight clash played last week but there was plenty of action in the lower league’s where in Division One, Ormonde Villa had a 1-0 success over Stoneyford United in Knocktopher on Sunday.

Eamon O’Reilly was the goalscorer for the visitors as they too opened up their league campaign in winning style while Stoneyford are still pointless at the base of the table after playing three games.

In Division Two the Durrow-based Lions were much too strong for Castlewarren Celtic at the Watershed where they had four goals to spare after Aaron Grady, Conor Deegan, Darren Maher and Danny Delahunty all netted in the comfortable success.

Division Three saw two games take place. There were wins for Deen Celtic and Tullaroan over Newpark B and St John’s respectively.

While it has been a steady beginning to the league fare in Kilkenny, the main action thus far has been in the various cup competitions and it’s another busy weekend upcoming with the next round of the FAI Junior Cup taking place.

Three Kilkenny sides will have home advantage on Sunday with Evergreen playing host to New Oak Boys at 11.30 while Highview Athletic will also have home comforts at the same time against Parkvilla from Navan in County Meath.

Freebooters are also at home at 2pm against Shamrock Rovers of Wexford while Newpark make the trip in the opposite direction as they take on the well renowned North End United who beat Fort Rangers in the last round.