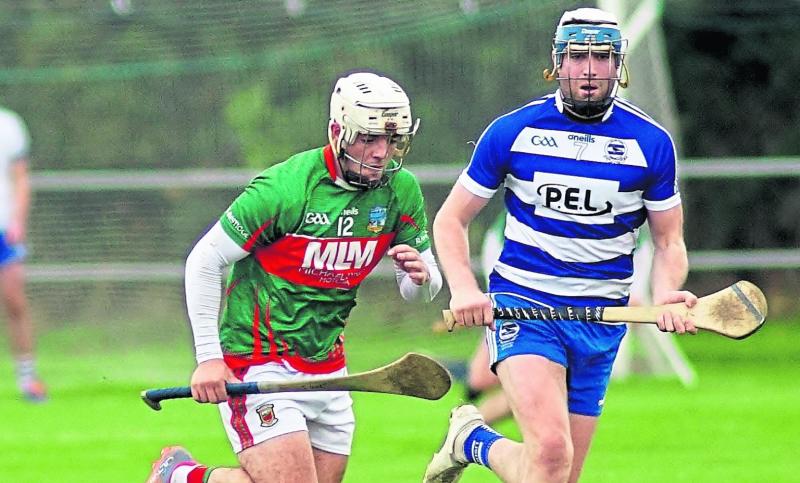 Both teams were anxious to secure their senior status and avoid a relegation final.

Relegation matches tend to be tense, tight affairs but in truth Lisdowney were in total control from a long way out.

In spite of a better second half showing from the Rower-Inistioge, Lisdowney still had plenty in hand when running out 3-18 to 1-15 winners.

Lisdowney got off to a fast start when Sean Phelan and Conor O’Carroll both pointed within the opening two minutes.

Lisdowney were guilty of some poor wides early on but they soon found their range.

In a seven minute spell between the 12th and 19th minutes, Lisdowney laid the foundations for their win scoring 1-5 without reply.

Aidan Tallis’ influence was growing and he reacted quickest when a shot for a point came back off the post and he finished to the net.

Conor O’Carroll rounded off the scoring blitz when he collected a pass from Brian Kavanagh before firing over to extend Lisdowney’s lead to eight, 1-7 to 0-2 after 19 minutes.

Rower-Inistioge were reeling but looked to have a lifeline when Sean Cleere adjudged that Jim Ryan was fouled when bearing down on goal and he awarded a penalty.

Unfortunately for Jack Walsh, his well struck shot was always rising and went over the bar, 1-7 to 0-3.

Lisdowney reacted brilliantly and Aidan Tallis pointed a free before wing back Michael Kenny landed an inspirational score, 1-9 to 0-3 after 22 minutes.

Worse was to come for the Rower-Inistioge when the excellent Aidan Tallis ghosted in behind their defence and gathered a long Niall Brennan clearance and goaled, 2-9 to 0-3.

The game was over as a contest when some slick Lisdowney handpassing found Aidan Tallis who rifled to the net for his third goal of the half, 3-10 to 0-5 after 26 minutes.

Jim Ryan and Eoin O’Brien landed two points for Rower-Inistioge but David O’Carroll responded with a Lisdowney point, 3-11 to 0-7.

Niall Brennan and Vinny Fitzpatrick rounded off the scoring for Lisdowney before a Jack Walsh (R-I) free brought the half to a conclusion with Lisdowney in a commanding 3-13 to 0-8 lead.

Rower-Inistioge landed the first point of the second half through substitute Kevin Murphy but Cathal Jordan pointed for Lisdowney from the restart.

Jim Ryan and Jack Walsh pointed for Rower-Inistioge to try and wrestle some momentum from Lisdowney but Vinny Fitzpatrick (L) responded to leave the southern side trailing by 13 (3-15 to 0-11), ten minutes into the second half.

Rower-Inistioge desperate for goals had a Richie Leahy 21 yard free saved and the resulting clearance was pointed by Conor O’Carroll to extend Lisdowney’s lead.

A Jack Walsh free and point from play from Jim Ryan (R-I) left the score 3-16 to 0-13 heading into the last quarter.
Aidan Tallis then pointed a 35 yard free in the 49th minute.

Rower-Inistioge looked to have found the net when Eoin O’Brien lobbed the sliotar over the advancing Lisdowney keeper Liam Dunphy only for Pat O’Carroll to clear the ball off the line.

Jack Walsh pointed the resulting free after an advantage was being played.

Rower-Inistioge had another goal chance moments later when Liam Dunphy in the Lisdowney goal was dispossessed but Michael Galavan’s shot was deflected for a ‘65 by corner back Ray Fitzpatrick.

Conor O’Carroll fired over from 40 yards for Lisdowney in injury time before Pat Lyng caught a long clearance and rifled a low shot to the Lisdowney net from 20 yards.

Sean Cleere’s final whistle saw jubilant scenes from the Lisdowney team and management as they cantered to safety on a score-line of 3-18 to 1-15.