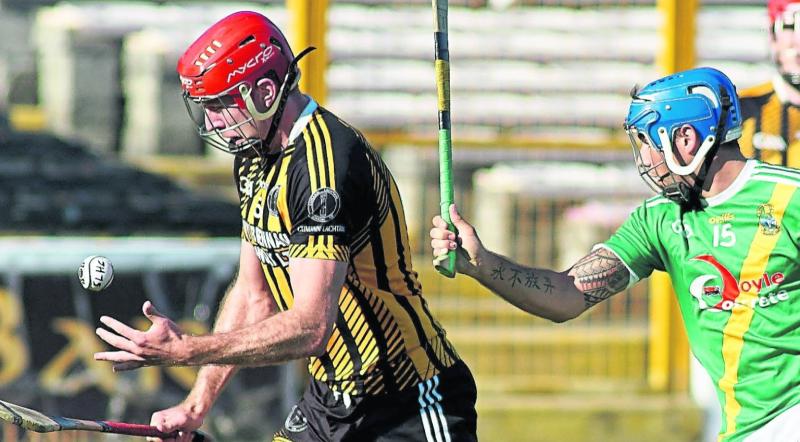 A devastating final quarter laid the platform for St Lachtain’s of Freshford to claim an impressive come from behind victory at Carrickshock’s expense on Sunday afternoon.

League shield winners Carrickshock appeared to be directly on track to sealing a place in the final four of the Intermediate Championship when leading 1-13 to 0-10 at the second water break but that stoppage stalled all their momentum with Lachtain’s taking full advantage with 1-7 inside the final 15 minutes.

Shane Donnelly got the goal for Freshford and it proved the catalyst in helping his side kick on to victory even if Carrickshock wasted a couple of late goal chances.

In a hugely entertaining game Lachtain’s led 0-3 to 0-2 after 10 minutes of play with both sides looking a big threat in attacking areas.

Back to back scores from Liam Hickey and Alexander Rafter then increased the lead to three for Lachtain’s and although missing a couple of chances they seemed pretty content with the opening quarter.

Carrickshock bounced back though to level the game at 0-6 apiece after both Jake O’Dwyer and Eoghan O’Neill knocked over a brace of scores.

Both sides also had chances for goal that went astray before the half-time break saw the sides deadlocked on level terms.

Carrickshock soon took control on the scoreboard though as within two minutes of the second half they led 1-9 to 0-7 after points from O’Neill and Kevin Farrell were added to by an expertly taken goal from Jake O’Dwyer.

Lachtain’s steadied the ship briefly with a Hickey free in the 35th minute but things didn’t look good for Freshford when Carrickshock then reeled off three points on the bounce after O’Neill converted a number of frees.

Darragh Brennan added to the Carrickshock tally and they looked to have one foot in the semi-finals entering the final quarter.
Despite trailing 1-13 to 0-10, Lachtain’s got a goal immediately after the second half water break to give themselves a lifeline when joint captain Shane Donnelly found the net and the goal gave his side a new lease of life as a result.

Further points from Hickey and James Maher then levelled up matters and while O’Neill did edge Carrickshock back in front in the 54th minute it proved to be their last score of the contest.

Lachtain’s were still hanging on somewhat at the end after Carrickshock went close with a number of goal opportunities but they held out.