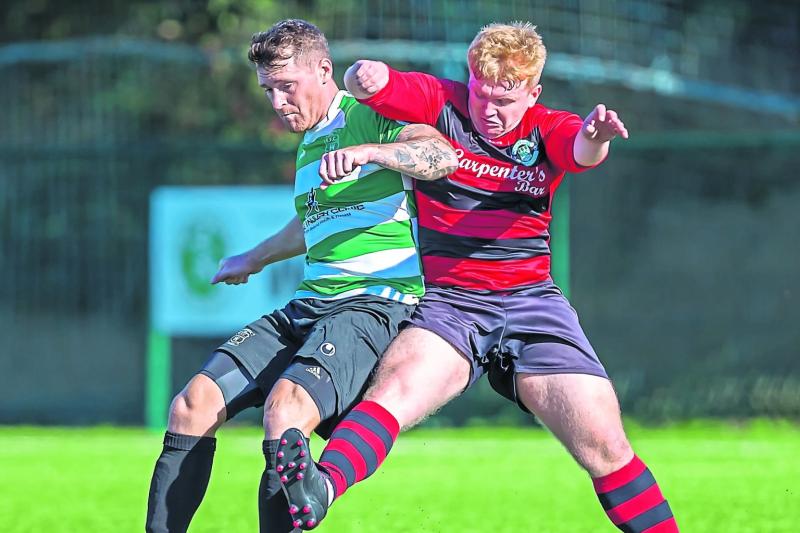 It was a busy weekend of action in the FAI Junior Cup with a number of Kilkenny clubs in action.

Evergreen had home advantage when Carlow side New Oak Boys made the short trip over the county boundary on Sunday morning and despite a tough game, the Kilkenny side did enough to emerge 2-1 winners.

The home team started rather sluggishly and were behind after only eight minutes of play.

Evergreen were on top for most of the duration of the half but it wasn’t until the 42nd minute that they found the equaliser when Niall Andrews found the net.

New Oak Boys barely had time to recover from that setback when Evergreen were celebrating within seconds after Craig Wall made it 2-1.

Evergreen then maintained that narrow advantage until the half-time break.

Evergreen were under periods of pressure throughout the second half but their experience told as they held on for a crucial victory that sealed their passage into the next round.

Freebooters had home advantage against Wexford based Shamrock Rovers and they were in sparkling form as they ran out 4-0 winners in a dominant display on Sunday afternoon.

The hosts took their time to work their way into the knockout tie but seven minutes before the break they took the lead when Chris Phelan found the target.

That was how it stayed until the half-time interval but the opening goal seemed to give the Kilkenny side the confidence to kick on as they scored three more goals in the second period.

Jim Ryan, Andy Walsh and Jackson Oyo all added further goals as Freebooters joined neighbours Evergreen in the next round.

It wasn’t such good news for Newpark as they fell to a 3-0 defeat at the hands of North End United.

The Kilkenny side hit the post and had a goal disallowed at crucial junctures of the game but overall they were up against it and their Wexford opponents eventually ran out easy winners.

Of the four Kilkenny sides in action, Highview Athletic’s clash with Parkville proved to be the most dramatic with the Graignamanagh based outfit losing out 5-4 to their Carlow neighbours.

Highview Athletic will have been hugely frustrated to exit the competition as they led Parkville on four separate occasions but just couldn’t see the game out.

Highview ran out of steam late on with Parkville taking full advantage.

There was also a number of games on the league front in Kilkenny with Laois side Clover United running out 5-2 winners over Bridge United in the premier division as well as Thomastown United gaining their second win of the season when having two goals to spare over Deen Celtic.

Mark Delahunty and Jack O’Byrne netted goals in each half for Thomastown as they maintained their unbeaten start to the season.

Lower down Fort Rangers had a 1-0 victory over Ormonde Villa in the first division while in Division 2 Castlewarren Celtic and St Canice’s shared the spoils after a an entertaining 2-2 draw.