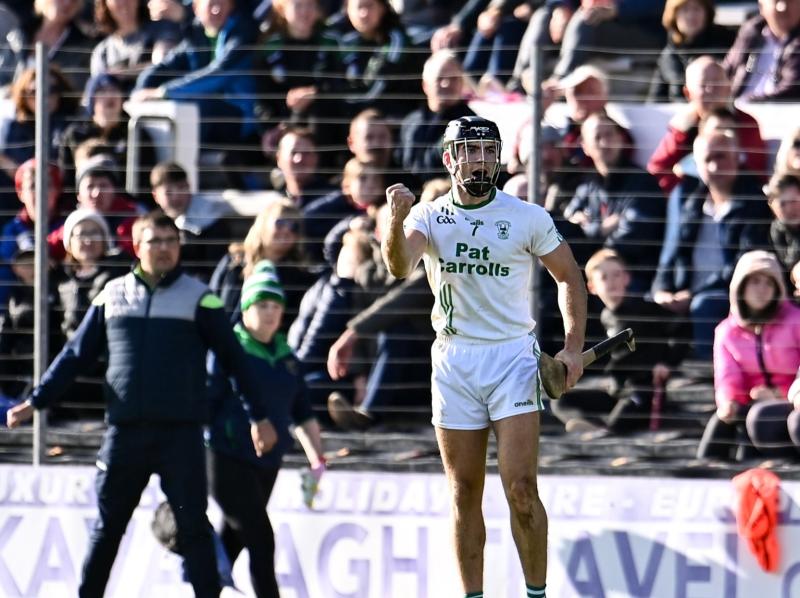 O’Loughlin’s eventual match winner proved to be Paddy Deegan but for a time he could have easily been the villain after missing a penalty in the 58th minute.

Tullaroan sub Jim Moore then pointed to level the game at 0-18 to 1-15 but credit to Deegan and O’Loughlins as they found an extra gear to grab the victory with Deegan, Eoin O’Shea and Mark Bergin all knocking over stoppage time points.

In the end a goal seperated the sides with Owen Wall’s brilliantly taken effort in the 15th minute eventually giving O’Loughlins the edge come the final whistle.

The victory now ensures that O’Loughlin Gaels will compete in the County Final for the first time since 2016 when they defeated Shamrocks.

Tullaroan played their part in a pulsating finale and while they relied heavily on the score taking of Shane Walsh, the 2019 Intermediate champions pushed O’Loughlins to the wire.

O’Loughlins came into the game as the narrowest of favourites but it was Tullaroan who opened the scoring when Shane Walsh pointed from play.

Mark Bergin then replied with a free for O’Loughlins and that set the tone for the contest with the two marksman leading the line for both sides.

In fact it took until Tomas Dunne scored from play in the 14th for Tullaroan that a third player got on the scoresheet.

At that stage Tullaroan were edging proceedings as they led 0-5 to 0-3 but there was nothing seperating the teams come the first half water break after the lively Owen Wall skipped by a couple of defenders before batting a shot past Paul Buggy as O’Loughlins netted the game’s opening goal.

The teams continued to trade scores in the second quarter unti back to back efforts from Wall and Deegan pushed O’Loughlins ahead.

It was a half dominated by both defences and while Shane Walsh continued to be fluent from frees, O'Loughlins held the edge at the break with points from Bergin and Cian Loy giving them a 1-9 to 0-11 buffer.

The opening to the second half was very disappointing with both sides proving careless in front of goal.

Bergin and Dylan Simpson initially swapped a pair of scores each before O’Loughlins sub Robbie Buckley knocked over a well earned point.

That gave Andy Comerford’s men a 1-12 to 0-13 lead and they brought that margin into the second half water break but only after they squandered a glorious chance for goal when Owen Wall was denied by Paul Buggy.

That missed goal chance seemed to spur Tullaroan into life and after successive points from Mossy Keoghan and Padraig Walsh, the sides were all square (0-16 to 1-13).

Buckley briefly edged O’Loughlins back in front but another Walsh free soon cancelled out that effort and it was anyone’s game entering the final few minutes.

A point from distance by Conor Heary in the 58th minute gave O’Loughlins the lead again before Buckley was fouled by John Moore for a penalty.

Paddy Deegan stepped up for the shot but he didn’t catch it properly and it drifted wide.

A Jim Moore score then looked like it would send the game to extra-time but O’Loughlins had other ideas as they finished in stunning style with Deegan leading the way alongside Bergin and Eoin O’Shea for crucial late points that sealed the victory.