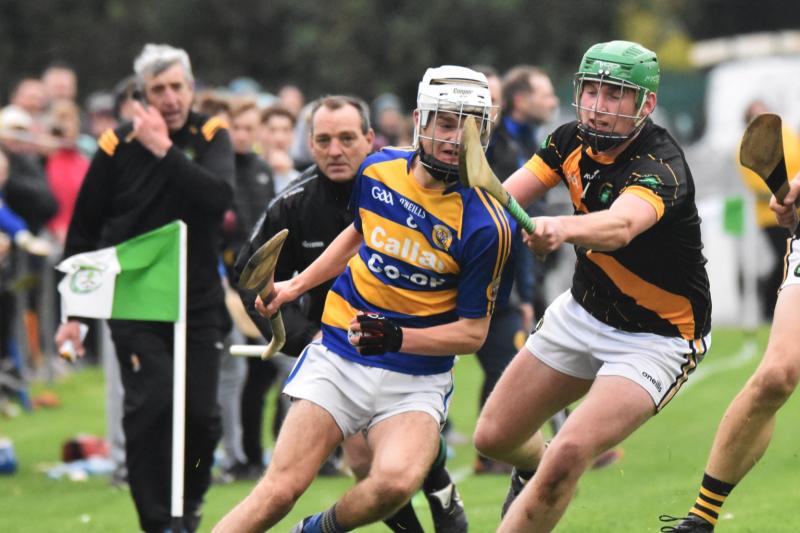 he proverbial game of two halves saw Conahy Shamrocks come strong in the second 30 minutes to retain their intermediate hurling status for another year and leave John Lockes (Callan) to battle with Young Irelands (Gowran) in the relegation final on November 6.

The strong wind in Tullaroan was always going to have a big influence on the game with John Lockes dominant for most of the first half when aided by the elements. Relegation games are all about survival, so a classic hurling contest was never going to materialise and so it turned out.

Despite Conahy scoring a point within a minute of the throw-in from Thomas Rice, the Callan men displayed greater energy and industry from an early stage. Bill McDowell levelled the game with a fine long-range point, but almost immediately John Mullan pointed for the winners from out on the wing.

When Ryan Bergin pointed a free on seven minutes it started a period of John Lockes dominance up to the interval. The Lockes half-back line of Cathal McGrath, Ryan Bergin and Bill McDowell were defiant, leaving the Conahy attack with few scoring chances.

At the other end of the pitch the Lockes were causing endless problems for the Conahy defence with the winner’s goalie Padraic Delaney coming to his side’s rescue on a couple of occasions.

Eoin McGrath slotted in well at centre-half-forward for John Lockes and he set up Shane Bergin for a point which might have ended up in the back of the Conahy net.

A Mikey Prendergast pointed free, which appeared to be harshly awarded against a Conahy defender edged the Lockes 0-6 to 0-3 ahead at the first water-break.

The winner’s dominance continued early in the second quarter when Conahy coughed up possession very easily in their attack.

When the ball was cleared into the heart of the winner’s defence Mikey Prendergast gained possession and raced through the Conahy defence for what turned out to be the game’s only goal.

Conahy were struggling at this stage and had to depend on a brace of James Bergin points from a 65 and a free to stay in touch with their opponents.

Eoin Scriven popped over another John Lockes point close to the interval, but Conahy had a big let-off in the 33rd minute when Ryan Bergin blasted a penalty over the bar for the Lockes to leave them ahead 1-8 to 0-5 at the interval.

A big improvement in attitude and work ethic saw Conahy control the second half, but it wasn’t without some scary moments.

Were it not for the alertness of Conahy goalie Padraic Delaney the ’Lockes could have added to their goal tally.

Mikey Prendergast should have grabbed his second goal in the fourth minute, but buoyed by that let off Conahy took a firm grip oi the middle third of the pitch to score five points without reply through James Bergin and Eddie Delaney (two each) and Donal Brennan to tie the game.

The Callan side’s rear-guard was now coming under increasing pressure, forcing them to drop Eoin McGrath back into defensive duties. Sub Robert Kerwick edged them ahead once again 17 minutes into the second half, their first score of the half.

A key turning point in the game was the introduction of Tom Phelan to the Conahy attack nine minutes into the second half.

Deliveries into his corner forward position were scarce for a period but he began to leave a big imprint on the game, laying off some neat passes which resulted in points for his team plus scoring a brace himself.

A James Bergin pointed free had the sides level at the second water-break, but immediately on the resumption Ryan Bergin from another free edged the Callan men ahead. But, that was as good as it got for the Lockes as they failed to score for the remainder of the game.

Conahy upped their work rate further in the closing quarter with points from Donal Brennan, Tom Phelan and Kieran Mooney, pushing their side two points ahead. The winners enjoyed another piece of good fortune in the sixtieth minute as an Eoin McGrath effort would have found the back of the Conahy net but for another brave save from Padraic Delaney.

Buoyed once again by that piece of good luck, Conahy attacked at the other end of the pitch and the game was made safe for the Northerners when Tom Phelan and James Bergin (free) added two further points.