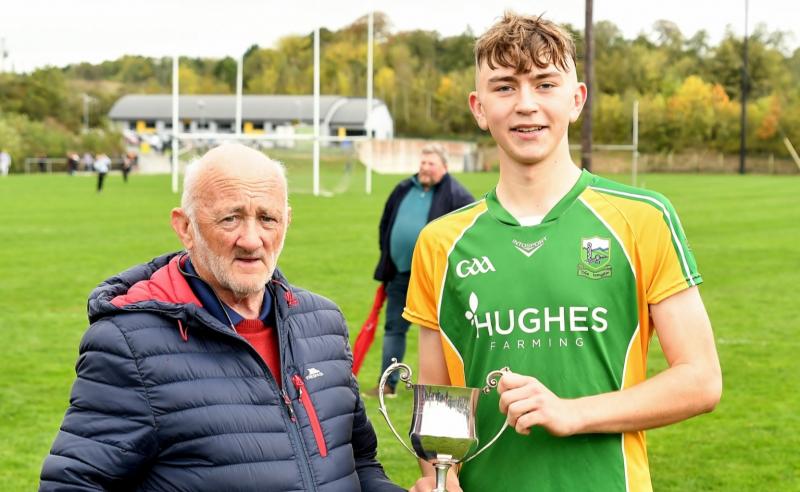 Dunnamaggin & Piltown clashed in the Duggan Steel Roinn B county final at a windy MW Hire Dunmore on Saturday.

It was a keenly anticipated game as both sides had being the stand out sides in the competition with Piltown landing the league title back in August.

No inch was given & the game ebbed and flowed with the side clad in green & yellow on the balance of play being worthy winners.

The eventual winners got off to the perfect start with Scott McDonald landing the first point of the afternoon with it soon being followed by one from Cathal Buckley.

Piltown turned the game on its head when Eoin Hogan goaled with a powerful shot that got beyond Tim Doherty such was the force of the shot.

Niall O’Brien slapped over a point of his before Sam Garbutt & Cathal O’Brien landed points of their own as the two corner forwards caused havoc.

O’Brien fired over two quick points before Buckley lifted the siege with a pointed free.

All of a sudden Dunnamaggin were back in the game when a long ball was fed to Buckley who rifled the ball to the bottom right hand corner. Cathal O’Brien sent the white flag waving before Buckley tested Bobby Norris who brought off a brilliant save.

Conor Long tagged on a minor with Cathal O’Brien adding one of his.

Two quick Buckley points towards the end of the half saw Piltown ahead at the short whistle 1-8 to 1-5.

Dunnamaggin began the new half in whirlwind fashion scoring 1-4 without reply.

Buckley (2), Jamie Tallon & Sean Lawton all pointed before Buckley went on a searing solo run and blasted the ball to send the green flag waving.

A hat trick of Niall O’Brien points saw the game back to the minimum.

Buckley (2), Noah Cahill & Brian Hickey all pointed as the game headed towards injury time but Niall O’Brien did put the game in the melting pot with a point but Dunnamaggin were not going to be denied.