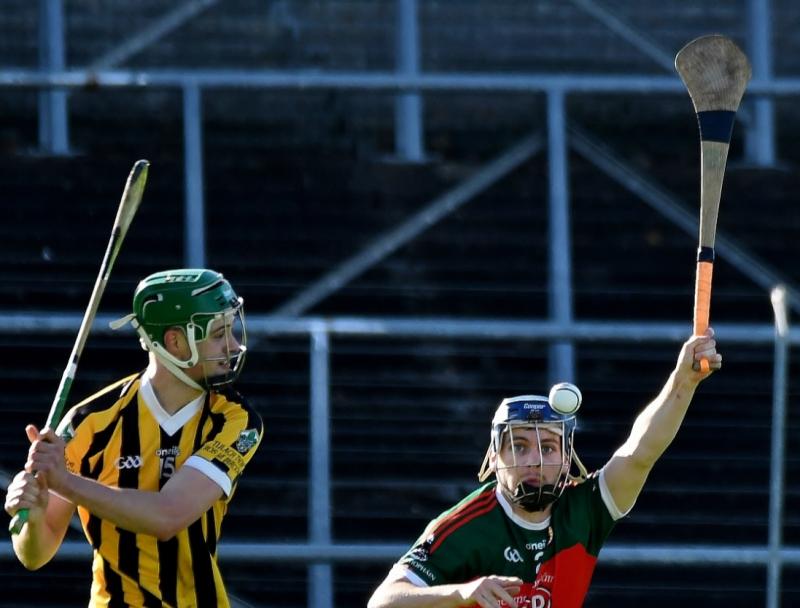 Cian O’Donoghue gets a shot away for Tullogher-Rosbercon during the Junior Championship semi-final against James Stephens. Pic: Willie Dempsey

A superb final quarter saw Tullogher-Rosbercon see off the challenge of James Stephens and seal their place in the JJ Kavanagh and Sons Junior Hurling Championship final.

After only a couple of years away from the Intermediate grade, the South Kilkenny Tullogher-Rosbercon outfit are now just 60 minutes away from a return to the second tier of hurling in Kilkenny.

Tullogher came into the semi-final clash with the second string James Stephens outfit confident of making the final. Apart from a few shaky moments, they were in control as they ran out seven point winners.

Both of the James Stephens goals arrived late in the day with Tomas Keogh and Tommy Walton finding a way past Eoin Kennedy but by that stage Tullogher had done more than enough to see out the result.

As is the norm Walter Walsh was in inspired form for the winners as he hit five points from play but he was even overshadowed by free taking corner forward Cian O’Donoghue who finished with 0-16 to his name.

Richie Dollard also impressed at full-forward and manager Bob Aylward will have been more than content on how his team performed ahead of a county final date with Mooncoin on Sunday week.

Fresh from their Junior Section B success over Dicksboro on the October Bank Holiday Monday, James Stephens began brightly with David Walton converting a brace of frees to give his side an early 0-2 to 0-0 lead.

Tullogher then replied with Cian O’Donoghue getting off the mark from play before Richie Dollard and Walter Walsh edged them in front.

Walton duly brought his tally to three points when he equalised a couple of minutes later but Tullogher were doing all the heavy work and a further three point spurt on the bounce left them ahead by double scores.

Walsh, Dollard and O’Donoghue got the scores during that period and while the Village replied via goalkeeper Gavin Costigan and Ethan Butler it was still Tullogher who led 0-7 to 0-5 at the first water break.

Jack McGrath narrowed the gap back to the minimum in the 18th minute but apart from the opening stages, James Stephens were chasing for the majority of the contest.

This was shown when O’Donoghue and Walsh added to their tallies to move four clear on the scoreboard. If it hadn’t been for an opportunistic save by Costigan from Walsh when the big Kilkenny star bore down on goal, the game could have been done as a contest by the half-time whistle.

As it stood James Stephens were very much still in contention by the halfway point after a couple of Walton frees got the city side back to within three points.

The first few minutes of the second period were competitively fought with both team going score for score after a pair of Walton frees for James Stephens were cancelled out by O’Donoghue and Stephen Lawlor.

Walton and Jack McGrath added on further frees for the Village but their effectiveness from play was beginning to dry up as Tullogher exerted further control with O’Donoghue, Walsh and sub Liam Barron all pointing into the O’Loughlin’s end of UPMC Nowlan Park as Tullogher led 0-17 to 0-12 by the second half water break.

Tullogher weren’t done on the scoring front quite yet though as they hit 10 points in the final quarter to bring their overall second half tally to 16.

The troublesome trio of Walsh, O’Donoghue and Dollard continued the scoring spree as they went eight clear by the 51st minute.

Under the tutelage of Peter Barry, James Stephens weren’t going to go away quietly and they certainly rallied in the final few minutes with both Tommy Walton and Tomas Keogh finding the net.

The closest they got to Tullogher as a result was five points as the winners always had a response and in particular O’Donoghue who got his side’s last eight points of the game.

James Stephens had further opportunities to add to their two goals in stoppage time but Gavin Costigan could only point a 21 yard free while roving full back Mikey Byrne had a goalbound effort turned away by Eoin Kennedy from close in.

In the end Tullogher-Rosbercon were dominant on the score board as they ran out 0-27 to 2-14 winners.