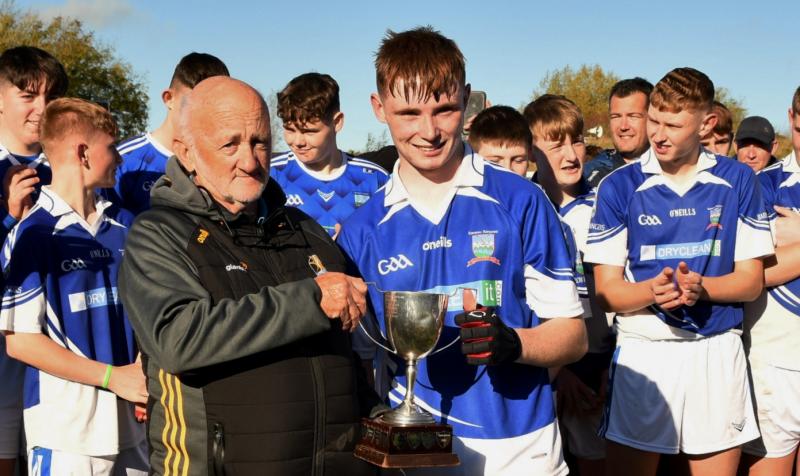 Saturday morning proved dry and sunny and with no wind, it provided perfect conditions for the conclusion to this Kilkenny Honda Centre Minor C championship final.

The opening score came after four minutes, Graig won a free on the half forward line which was pointed by Sean Hamilton.
It took about seven minutes of play before we saw Paulstown register their first score with Cathal Purcell putting over a point from play.

Joe Healy then stepped up and pointed a 65 making it 0-2 to 0-1 in the Rangers favour before Conor Byrne equalised with a point from play.

Not to be outdone the Rangers forward Niall Carpenter scored an equally fine point from the corner.

At this stage of the game it looked as is Graig were gaining an upper hand on the game as Sean Hamilton proved his scoring eye was in with a 65 and a 70-yard free going over the bar to give Graignamanagh a lead of 0-4 to 0-3 heading into the 1st water break.

Sean Hamilton converted a 65 on the resumption to give Graignamanagh a two point lead which subsequently proved to be as good as it was going to get for the Graig lads.

The game looked to proceed with the same script as the first quarter – Joe Healy and Ivan Bolger continued to battle for supremacy - Ivan making some powerful runs with the ball into midfield - Joe winning his share of ball and getting a nice point.

However Rangers rotation of the forwards paid off when Dylan Hunston finished off some good work from the forwards and the ball rolled into Bill O’ Shea’s goal to make the score 1-4 to 0-5.

Sean Hamilton then replied with a free to leave just one point between the sides.

The game was levelled when Graig were awarded a free in midfield which Sean Hamilton put over for a great point.

Joe Healy put a free over for a point as half time approached to give Rangers a one point lead heading into the break 1-5 to 0-7.

Charlie Kielthy won a free at the start of the second half which Sean Hamilton converted for a point to level up matters.

Less than five minutes into the second half and the blue tide began to rise.

Paddy Wade in full forward for the first time as named on the match programme pointed after he received a Charlie Mullins ball played in from the wing after a fantastic run.

Joe Healy got a brace of points from play soon after, the second from a great catch despite the efforts of his marker.

Three unanswered points from play could only spell trouble for Graignamanagh.

The third quarter ended with both Joe Healy and Sean Hamilton pointing frees for their respective teams.

An Ivan Bolger shot went wide which gave Ranger’s keeper Jack Doyle the opportunity to drive the puckout long with Niall Carpenter gathering it and played a great ball into Dylan Hunston who drove the ball into the Graig goal to give the Rangers man his second goal.

Surely no way back now for Graignamanagh.

Joe Healy kept the Rangers scoreboard ticking with a point.

It was now a seven point game and panic was setting in for Graig.

Five minutes remaining and Sean dropped a free into the forward line which in the middle of the melee Ted Dunne connected from 15 yards out to put the ball into the Paulstown net but it looked too little too late for a Graig comeback.

Graig rallied and tried to force a positive outcome with a sustained effort of pressure which resulted in Cian O’Shea winning a free which Sean Hamilton put over the bar – a goal separated the two teams.

Barrow Rangers didn’t do panic and Noah Scully made a great run from the 45 yard line and played the ball into sub Liam Healy who forced a 65. Captain Joe Healy converted the 65 with a great point over the blackspot.

The final passage of play saw Graig win a free on the right wing which Sean Hamilton duly put over.

The barrow keeper took the puck out but that was the end of the game.

No question that Barrow Rangers were the deserving winners on the day with a well balanced team that included five scoring forwards and a well drilled set of backs whereas Graignamanagh could only register 1-1 from play.

This win caps a great year for Barrow Rangers with the under-13 Roinn C Co Championship to go in the Trophy Cabinet with the Minor win. They also contested the under-15 Roinn C County Final but finished second best that day.