Kilkenny JHC- Goal machine Mooncoin were much too good for Slieverue 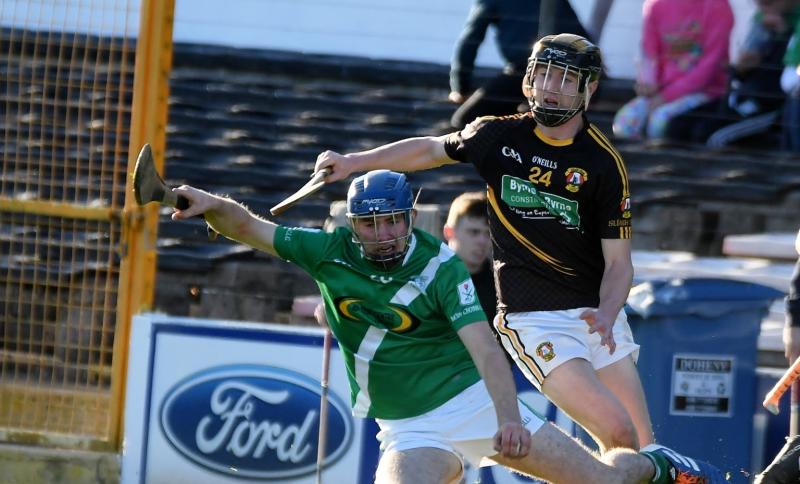 It was all too easy for Mooncoin as they comprehensively got the better of a very disappointing Slieverue side to book their place in JJ Kavanagh and Sons junior hurling county final.

Mooncoin have been in red hot form throughout the championship thus far but Saturday’s six-goal bonanza at UPMC Nowlan Park topped the lot.

The South Kilkenny derby was much anticipated prior to throw-in but once Sean Gannon netted Mooncoin’s opening goal in the ninth minute there was only ever going to be one winner.

Mooncoin full-forward Patrick Walsh added another goal in the next attack and after trailing 0-3 to 0-2 they had quickly built up a five-point advantage that they would never relinquish.

Killian Hogan got Mooncoin’s third goal before the half-time whistle while Ciaran Quilty and subs James Delahunty and Oisin Henebery all added to the tally in the second period.

Slieverue will be very disappointed by their output throughout the 60 minutes of the contest. The fact that only four of their players found the target in the whole game perhaps tells its own story.

Mooncoin know they won’t have it as easy in the final as they did in this 19-point hammering but the way they performed will have been most pleasing to their management team. They look well set up for a tilt at a Tullogher-Rosbercon side who had all guns blazing when beating James Stephens.

Slieverue came into the game full of lustre and they played like that early on with Paul Rockett knocking over a couple of nice points from play.

Mooncoin replied with efforts from Martin O’Neill and Adam Croke, but it was O’Neill’s score that could have easily been a goal that set the warning signs flashing loudly for Slieverue.

Mooncoin were able to break through the Slieverue defence all too easily and although Craig Phelan edged Slieverue into a 0-3 to 0-2 lead by the ninth minute , the dam soon burst with Mooncoin’s opening goal arriving just seconds after their opponents hit the front.

Sean Gannon scored on the back of a Paul Henebery assist before Patrick Walsh converted a second goal.

Mooncoin led by five points at that stage and Slieverue’s rearguard was rocking, but they survived to the first water break in only trailing by seven points after centre back Paul Henebery knocked over successive 65s for the winners.

Mooncoin last tasted junior success five years ago but this is their best opportunity since that 2016 victory over John Lockes. When they rattled on 1-4 without reply in the third quarter you could see what an impressive outfit they are.

Craig Phelan finished with five points from play for Slieverue and his 18th minute effort got his side back to six points before the spell of dominance for Mooncoin.

Hogan’s effort came from a long ball out of defence and after Slieverue couldn’t deal with it sufficiently, the corner forward was in the right position to pounce.

Phelan then rounded off the scoring in the opening half with his third point from play as Mooncoin went into the break leading 3-8 to 0-5.

The one-sided nature of proceedings certainly didn’t help matters but it was very poor fare in the opening quarter of the second with both sides struggling to maintain any control.

Slieverue already had a mountain to climb at that stage and they needed some sort of resurgence to bring some excitement to a game that was fading away but it never happened.

Mooncoin outscored their opponents 0-3 to 0-1 inside the opening 10 minutes of the half a brace of scores from play by Adam Croke coming on the back of Patrick Walsh and Craig Phelan sharing points.

Slieverue’s only real goal chance arrived in the 44th minute when a long range shot from Jack Frisby was batted down by Mooncoin goalkeeper Eoin Purcell. Gary Walsh looked primed to score but his ground effort was well saved by Purcell - with that went any chance of a Slieverue revival.

Just two minutes after that missed goal opportunity, Mooncoin found the net for the fourth time and the first in the second half when Ciaran Quilty finished past Jamie O’Brien.

Quilty then added on another point afterwards and Mooncoin led 4-12 to 0-7.

Paul Rockett continued to be a threat for Slieverue and he responded with his third point before Mooncoin were celebrating another goal with sub James Delahunty benefiting from a goalkeeping error to score.

Further scores from Quilty and Martin O’Neill then left Mooncoin ahead on a 5-14 to 0-8 scoreline.

It would have been easy for the Slieverue players to drop their heads coming into the final few minutes of a game that ended as a contest very early on but they kept plugging away and scored five points in a row between the 55th and 62nd minutes to try and put some gloss on the scoreboard.

Any sheen was quickly extinguished though when Oisin Henebery scored a sixth goal for Mooncoin in stoppage time.

Job done for Mooncoin but the real test awaits.