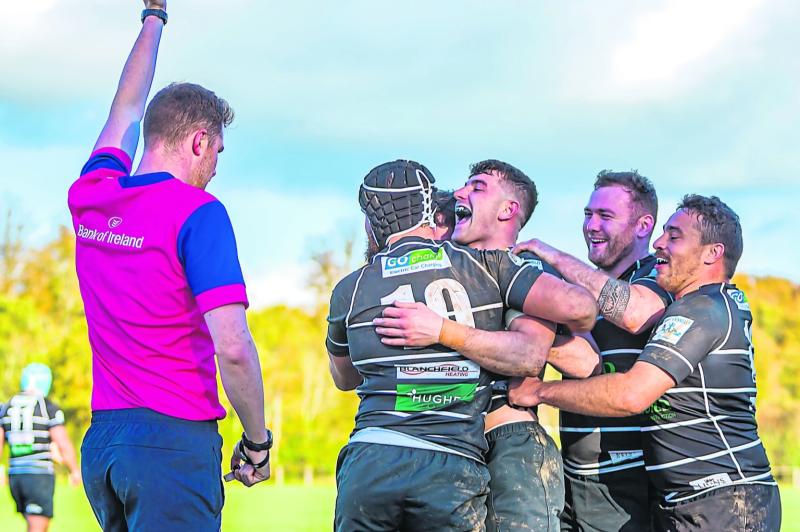 Kilkenny RFC entered the latest round of Leinster League Division 1 on the back of a disappointing loss to league leaders Monkstown.

Facing second placed Seapoint, Kilkenny’s challenge seemed uphill, but given their home form, any visitors to Foulkstown are sure to be pushed the whole way.

With some key players missing, Kilkenny reshuffled the deck and made some interesting positional changes, particularly in the backline.

In the forwards Kilkenny were without Joe Moynihand and Louis Venter, while in the backs Aidan McDonald and Conro Walsh were absent.

Additionally, talisman and No8, Gary Dunne was absent due to a long term injury sustained against Monkstown.

With the missing players Kilkenny opted to select Joe Manuel in the back row, accompanied by David O’Connor and Roy Stanley.

The welcome return of Wes Carter saw him start in the second row alongside Simon O’Hara, with Dempsey, Devlin and Phelan making up the front row.

Unfortunately, adding insult to injury, during the warm up, speedster winger Podge Mahon rolled his ankle and was withdrawn.

This resulted in Manuel reverting to the wing with Shane O’Riordan slotting into No7.

In the backs, Hugh Corkery was moved from No 12 to scrum half, with new recruit Jake Partley starting at out half. This saw team captain Jake McDonaly slot in at no 12 with Liam Caddy at 13.

The back three were completed by Jack Walsh, Lyndon Branigan and the aforementioned Manuel.

Kilkenny started the contest best and quickly got a foothold in the game, asking lots of questions of the South Dublin visitors.

Their lineout and scrum were impeccable, giving themselves every opportunity to attack from a solid platform.

It didn’t take long for the opening score to come. A series of positive phases allowed Jake McDonald to get in under the posts.

Hugh Corkery then made no mistake with the conversion.

To their credit, Kilkenny worked hard and defence gallantly, stopping all that Seapoint could offer.

The reliable boots of Partley, Corkery and Walsh alleviated pressure at various intervals.

Shane O’Riordan was unlucky to concede a penalty in the 25th minute with his efforts to tackle the ball carrier appearing to be legal were deemed as the opposite by the referee.

From the resulting penalty Seapont went to the corner, however a dangerous play in the maul saw one of their players sent to the sin bin. This should have been an opportunity for the cats, but they seemed to allow indiscipline creep into their game.

In the following 10 minutes Kilkenny failed to make any impact on the scoreboard, in fact they conceded a further five penalties, giving Seapoint various opportunities.

In the 35th minute Jack Walsh was very unfortunate not to have a legitimate try awarded. The young Mullinavat man has had a difficult season, but he is showing glimpses of returning to his best.

Receiving the ball 20 out Walsh chipped a perfectly weighted kick through. Chasing the ball he dived making what looked like a super individual score. The referee had other ideas and adjudicated that the ball had crossed the dead ball line.

Seapoint knew they were let off the hook; their reactions were of amazement. A fantastic covering tackle by Roy Stanley on the cusp of half time stopped Seapoint scoring a certain try, the Urlingford man showed immense workrate and athleticism to get back to make the interjection.

The second half started as the first did, Kilkenny mounting pressure on the visitors, again, there was not long to wait long for the next score.

In the 48th minute Kilkenny won a penalty 22m out. Taking the line out option Simon O’Hare rose to brilliantly gather the ball at the tail. Taking the ball down Kilkenny set up a maul and drove to the line in superb fashion, gaining 10 meters.

Corkery released a pass to Partley, who linked with Jake McDonald, a brilliantly executed loop in the middle of the field, creating a two-man overlap, McDonald received the ball to go over in the corner.

Corkery failed with the conversion attempt but Kilkenny had a 12-0 lead.

Further indiscipine hampered everything Kilkenny did. Ruck entry was poor as was ruck clear out, this area saw Kilkenny conceding a mass on penalties.

As the game progressed Seapoint began to introduce impact players from the bench. To the contrary, with so many key players injured Kilkenny had a limited pool of impact players to call upon. This appeared to hamper Kilkenny, having played so well for 65 minutes they appeared to be tiring, and quickly.

With new life in their team Seapoint began their comeback. Their first score came in the 65th minute, a horrible injury to Kilkenny replacement prop Brian Howe, saw the game held up for 15 minutes.

After play resumed the Dubliners maintained their charge, soring a converted try in the 75th minute to gain a two point lead.

Another penalty saw them extend the lead to five points in the 78th minute.

Kilkenny had a chance in the final minute to score, but a poor pass saw an unforced knock on allow Seapoint to clear their lines and the visitors ran out 17-12 winners in Foulkstown.

Though they played excellent, Kilkenny will be exceptionally disappointed.

They had the game won, but their fitness appeared not fade away in the final few minutes.

That said the impact of the missing players was obvious for all to see, however the bench could have been used to generate effectiveness. The players and management will be hurting, they know they had one of the league favourites rattled and on the ropes, but failed to make the knockout punch.

Despite the loss, Kilkenny picked up a losing bonus point, which keeps them in 4th position, five points ahead of Bective Rangers and one ahead of Suttoinians. Monkstown and Seapoint look to be the main teams in contention.

Kilkenny had some super performances throughout, up front Conor Dempsey was back to his best, Simon O’Hare, the quintessential second row, was solid as was Roy Stanley, who was exceptional.

In the backs, the two Jakes, Pratley and McDonald, did well as did Jack Walsh who’s returning to his best.