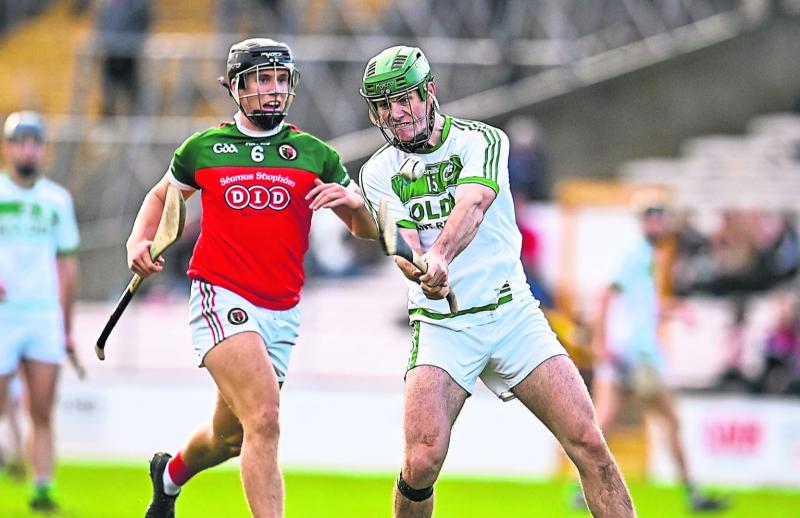 Eoin Cody is part of talented Shamrocks side chasing county glory on Sunday but with players like Robbie Buckley in their ranks O’Loughlin’s possess a threat of their own . Pic; Sportsfile

The biggest day in the Kilkenny hurling club calendar is upon us and it’s no surprise that the defending All-Ireland champions Shamrocks are back in their fourth successive senior hurling championship final.

In contrast their opponents O’Loughlin Gaels are appearing in their first final since 2016 but coincidentally they beat Shamrocks on that occasion before eventually losing out to Cuala of Dublin in the Leinster final later that winter.

The city side got the better of the Ballyhale boys by 0-19 to 1-12 in that Kilkenny decider, but much has changed since then, with Shamrocks in particular taking things to another level.

While Dicksboro plundered championship honours in 2017, there’s been a Shamrocks dominance ever since on both the local and national front - they’ve landed three Kilkenny titles, two Leinster titles and two All-Ireland crowns.

In fact if it weren’t for the disruption of the Covid-19 pandemic, Shamrocks may well have added to their Leinster and All-Ireland honours in 2020.

Shamrocks will come into the Kilkenny final as hot favourites and with the talent at their disposal you’d be a brave man to bet against them making it title number 19 on Sunday afternoon.

That said, the underdogs tag will suit O’Loughlin’s perfectly though. With a handful of players still around from that 2016 win, the city side will come into the game with no fear.

Paddy Deegan and Huw Lawlor are mainstays for O’Loughlin’s now while they were still only under 21 when claiming the Tom Walsh Cup five years ago.

The two Kilkenny stars are just part of a successful period at underage level for the city club.

Back in 2014 the club won under-14, 16 and minor titles. A large number of those three sides will be on view on Sunday afternoon.

The club claimed further minor glory in 2017 but perhaps more significantly were victories in the under-21 grade in both 2015 and 2019.

The under-21 success came two years ago against a Shamrocks team which included the likes of Adrian Mullen and Eoin Cody, so that victory will give O’Loughlin’s a good degree of confidence heading into the final.

Shamrocks have a huge aura around them so the fact that a number of the O’Loughlin’s players have beat them at under-21 or senior level may be significant.

Shamrocks will not have forgotten those losses though. As they aim to recreate history and win a fourth senior title on the spin, they have been fully warned about the ability of their opponents.

That 2016 final defeat is likely to play a big part among discussions in the Shamrocks dressing room this week.

The reigning All-Ireland champions have history in their sights on all levels and they would love nothing better than to repeat what the club achieved between 2006 and 2009 in achieving a four in a row.

Significantly, very few of the Shamrocks players will have been around back then and it’s very much a new team under the guidance of James O’Connor, but it’s pretty clear they are fully intent on grabbing a Kilkenny crown this weekend.

While they won’t be looking too far down the line, you also get the feeling they’d only love the chance to defend their Leinster and All-Ireland titles after their efforts were hampered by the pandemic last term.

As it stands Shamrocks look in great shape and the six point semi-final victory over James Stephens means they could even be better than ever.

Like in 2020, the Shamrocks rather stuttered their way through a league campaign where they were without a number of key players and they suffered defeat at the hands of the Village and eventual league winners Bennettsbridge.

They then found their form when they romped to victory over Tullaroan and they haven’t looked back since after championship victories over Graigue-Ballycallan, Bennettsbridge and James Stephens.

The way they dismantled talented sides in the shape of the ’Bridge and the Village in their previous two games shows the height of the challenge facing O’Loughlin Gaels on Sunday.

Andy Comerford’s charges need only look back to last year’s county final to see what can happen to a side when things don’t click.

It was arguably Shamrocks’ most complete performance in recent times as they destroyed Dicksboro 5-19 to 1-10 in a devastating team display.

If anything is to focus the O’Loughlin Gaels mind then that may be it, but despite the aura that exists around their opponents, it has still been a great year for the Kilkenny City club thus far.

The 2016 champions fell to a shock opening league defeat against Mullinavat but it’s been an upward trajectory ever since.

Wins over Graigue-Ballycallan and Dicksboro ensured they finished third in their group while the move of Paddy Deegan to full-forward has been the most interesting aspect of the O’Loughlin’s run to the final.

Deegan was crucial in O’Loughlin’s overcoming Rower-Inistioge and Mullinavat but particularly in the win against Tullaroan in the semi-final.

The combination of Huw Lawlor and Deegan at full and centre back respectively was as solid as it comes but credit must go to the management in trying to find an extra dynamic edge to their attack - it’s worked a treat.

Deegan has been superb in all of the games this year and if he’s not scoring, he’s assisting someone to score - but the question is what do you do with him on Sunday?

Deegan roamed between full-forward and the midfield area during the semi-final victory over Tullaroan, where he missed a penalty as well as scored a few points, but arguably most important of all was the way he won a few crucial interceptions in his own half at the end of the game.

Needs will more than likely dictate that he plays a similar role against Shamrocks but then if he’s out the field will they get enough scores inside.

It’s a valid question to ask and it’s something Shamrocks thrive on - the uncertainty of others.

After scoring six goals in their league opener against Bennettsbridge, Shamrocks forced the league champions to alter their entire gameplan when they met in the quarter-finals and the Ballyhale boys ran out easy winners.

How O’Loughlin’s line out tactically will be most interesting.

When they won back in 2016, they manmarked the likes of Henry Shefflin and TJ Reid so you wouldn’t be surprised if they did something similar with Eoin Cody and co.

O’Loughlin’s need to take a leaf from their neighbours James Stephens’ book and just take the game to Shamrocks.

After all, it was only Eoin Cody’s fortunate goal that gave them a route into the game before taking over afterwards.

As well as Deegan and Lawlor, O’Loughlin’s have big performers in Mark Bergin, Cian Loy and Eoin O’Shea while Robbie Buckley has been a menace off the bench. They will need to have them firing on all cylinders come Sunday.

If O’Loughlin’s can somehow stop or at least limit the goal threat of the likes of TJ Reid, Colin Fennelly, Eoin Cody and Adrian Mullen then they have a big chance - but that’s a lot easier said than done.

Shamrocks have so many aces in their pack and with the likes of Joe Cuddihy, Brian Cody and Evan Shefflin also coming of age the Ballyhale boys are perfectly set to claim another Kilkenny senior hurling title.