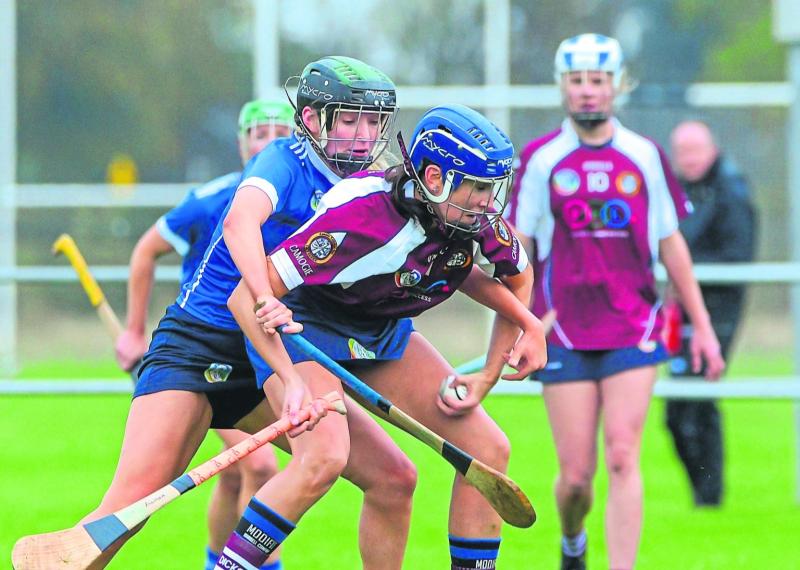 Dicksboro beat reigning county champions Thomastown at a rain-soaked Pairc Sheamuis Stiophan to set up a repeat of the 2019 county final against Piltown.

Aoife Prendergast opened the scoring with a point for Dicksboro in the 6th minute on the 65m line out near the sideline. A minute later, Therese Donnelly doubled on the ball that Meighan Farrell had hit short from a free to equalise for Thomastown
Asha McHardy slotted over Dicksboro’s second point, before she hit a rasper passed Kate McDonald into the bottom corner of the net to put the Boro 1-2 to 0-1 ahead after 10 minutes.

Heading towards the waterbreak, through driving rain and wind, Lisa Donnelly added another point for Thomastown after several shots at the opposition goal had been blocked out by the Boro defence.

After the mini break, an Aoife Prendergast free found Amy Clifford and the latter slotted over a point for the city side
From the 16th to the 23rd minutes, scores were hard to come by, due to great defending by both teams and to the bad weather conditions. The Boro’s Ciara Phelan broke the scoring lull in the 24th minute after plucking the sliotar from a ruck and slotted over the bar. Aoife Prendergast extended the city side’s lead with a point from a 50m free.

Thomastown were unable to convert any scores in the second quarter for all they tried, as the ’Boro defence stood strong.

Niamh Donnelly narrowed the gap for Thomastown with a close in free early in the second half. Aoife Prendergast and Donnelly exchanged pointed frees by the 35th minute before Donnelly brought it back to a three point game with a pointed free after Anna Farrell was fouled.

Asha McHardy scored a great point for the city side from a tight angle while being harried and hassled by the Thomastown defence, leaving the score 1-7 (D) to 0-6 at the second waterbreak.

Over the next nine minutes after the waterbreak, no team could add to their tally due to great hooking and blocking by both teams.

In the 53rd minute, Niamh Donnelly converted a point from play for Thomastown.

Then in the 56th minute, Eimear Farrell ran at the Boro defence, found substitute Sarah Barcoe and the latter slotted over a point under pressure to narrow the gap to two.

Thomastown were now applying all the pressure on the Boro defence and Niamh Donnelly slotted over a 35m free to leave the bare minimum between the two sides.

That turned out to be the last score of the match with the city side winning on a scoreline of 2-7 to 0-9.