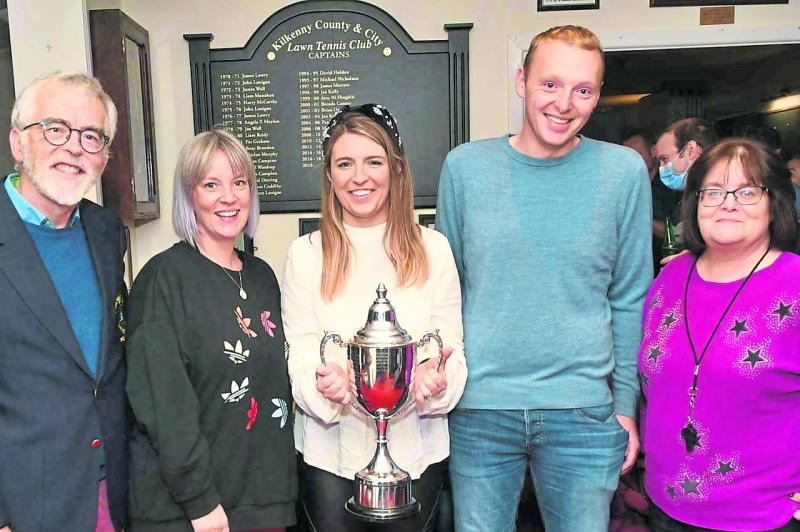 More than 100 players took to the courts on Saturday night to support the Kilkenny Tennis Club’s annual fundraising competition in aid of the Carlow Kilkenny Home Care Team.

This year’s competition was held in memory of Tom Madigan and Tommy Tyrrell, two of the club’s beloved past members who had cause to use the services of this valuable service. Such was the popularity of the event, organisers had to provide two starting times for players in a staggered, whistle-stop competition.

The Tommy Tyrrell Cup was presented by Mingha Flannery to the top section, Maurice Reidy and Jill Roberts. Runners-up were Brian Reidy and Miriam Whelan.

The Carlow Kilkenny Home Care Team and Kilkenny Tennis Club have a longstanding connection, with the first tournament being won by Derry McPhillips and Lorraine Durnham in the early 1990s.

The Home Care Team was represented by Frank Chambers on the night. In his speech at the prizegiving he re in forced the importance of the Home Care Team’s role, now more than ever with the onset of Covid-19 – more people are needing/wanting to be cared for at home for this important end of life stage. He reported that the demand for care at home is high currently and the importance of the role of the Home Care team was emphasised.

Generous corporate sponsorship was received in the form of court sponsorship. Individual donations were received, entry fees were donated by the club and the raffle that took place on the night was very popular. Through an incredible overall effort, more than €15,000 has been pledged to this worthy charity so far. This is a record total for the tennis club, and thanks must go to all that were involved in making it happen.

The next club tournament to take place is the Winter League, which is kindly sponsored by the Ormonde Hotel. Entry for this mixed doubles tournament is On Line on the Tennis Ireland website.