Thomastown and Freebooters share the spoils in league clash 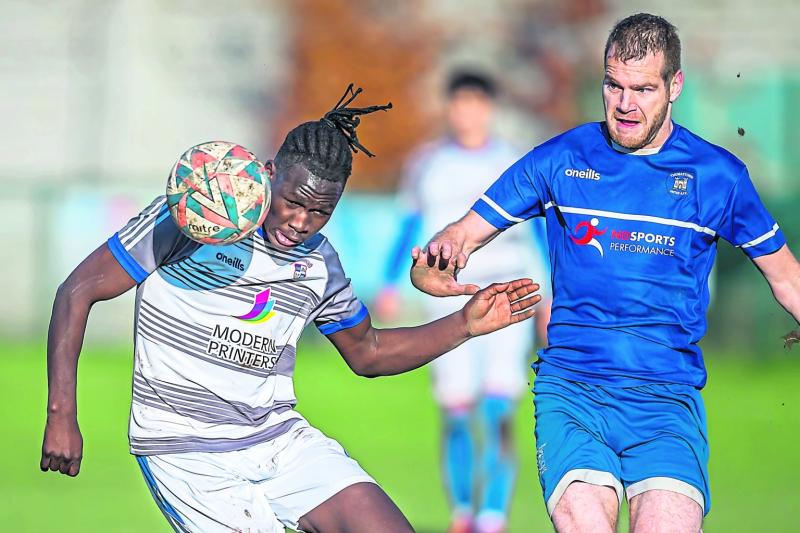 Thomastown United remain atop of the Junior St Canice’s Credit Union Premier Division despite playing out a scoreless draw with city side Freebooters at the Fairgreen on Sunday morning.

Thomastown came into the game on the back of winning all four of their league games thus far but Freebooters were always likely to provide their stiffest challenge thus far and that’s exactly how things transpired.

Freebooters themselves had started the league in decent fashion with their only defeat coming against near neighbours Evergreen a couple of weeks ago.

In truth both teams cancelled each other out and they had to settle for a point.

Thomastown’s slip up presented Evergreen with the chance to close the gap on the league leaders but Newpark had other ideas as the teams shared six goals in a cracking 3-3 draw.

All six of the goals remarkably arrived in the second half but Newpark will be wondering how they didn’t take home all three points after leading 3-1 at one stage.

Newpark opened the scoring with a penalty in the 55th minute and a mere six minutes later they won another one to double the advantage.

Jason Quan then got a goal back for Evergreen but with Newpark soon making it 3-1, Evergreen looked to have a mountain to climb.

Still Evergreen found a way to snatch a point with two goals inside the final ten minutes which included a cracking strike from distance by Dylan Hunston.

As a result Evergreen remain in second position in the league but having played a game less than Thomastown, they will have the chance to go level with the Grennan boys when they meet Deen Celtic next weekend.

The final game in the premier division saw Bridge United and Highview Athletic collide and it was more despair for a pointless Highview as Bridge ran out convincing 3-0 winners.

Fresh from defeating Deen Celtic a week previous, the Goresbridge based outfit made it back to back victories that sees them creep up the league table.

Bridge were in control for almost the entirety of the game and they quickly went into a 2-0 lead after Tommy Bolger and Sean Murphy both scored in the opening half.

Highview were much improved in the second period but they couldn’t find a goal that would have got them back into the game and Eoin Kavanagh made them pay when he scored Bridge’s third goal late on.

In an entertaining clash at Woodview it was Freshford who opened the scoring when Michael Burke broke forward from midfield to score .

Freshford were unable to hold on to that lead until the break though with St Canice’s equalising from a well worked corner to leave the sides on level terms.

Freshford got back on top in the second period though and they retook the lead when Michael Kenny was deemed to be fouled in the box and Liam Hickey stepped up to finish the penalty to the net.

St Canice’s then piled on the pressure in the hope of finding an equaliser but the Freshford defence stood tall and were able to keep them out. Freshford soon added a third goal to put a bit of gloss on the scoreline when good build up play from Shane Donnelly and Jack Cleere forced a St.Canices defender to kick into his own net.

In the end it was a statement win for Freshford who were only having their first league game of the season and they will hope to kick on over the next few weeks.

The other games in the division saw both the Thomastown and Highview Athletic second string teams fall to defeats at the hands of River Rangers and Lions AFC with the Durrow based Lions side now joining St Canice’s at the top of the table.

There was also a pair of games in the Junior Division 3 League with Brookville AFC defeating Deen Celtic 1-0 while Evergreen 46 had a 2-1 victory over Spa United on the Kells Road.

St John’s continue to make the running as they lead the way at the top of the table.