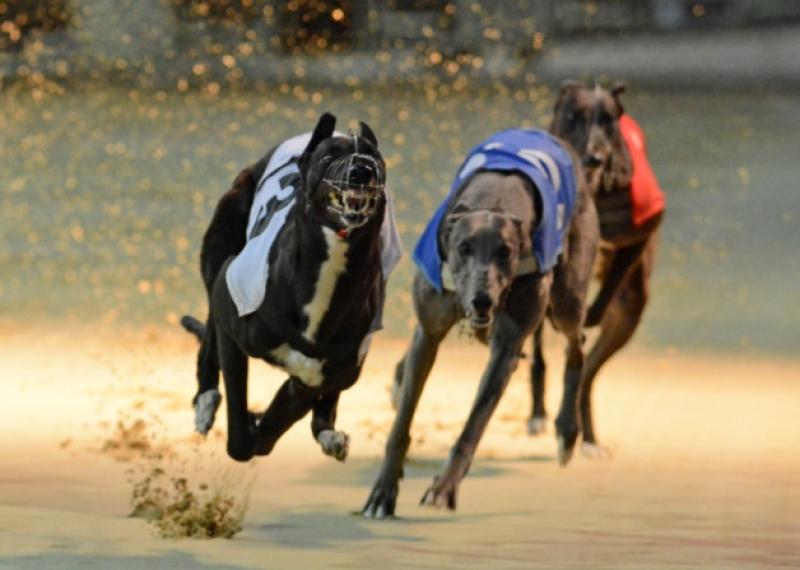 Racing on Friday night was action packed. There was an intriguing 12 dog Novice 725 contest, and a hot looking a3 stake also.

Racing on Friday night was action packed. There was an intriguing 12 dog Novice 725 contest, and a hot looking a3 stake also.

The fastest time was regisgtered in the last race. Rosmult Jet used his early dash to score in 29.43. The winner took a flyer from trap 4 and was two lengths clear into the first turn.

The son of Cabra Cool and Borna Clancy was six lengths ahead of Garryglass Sammy at the second and increased that lead to eight into the third as Pookies Plan went second.

Pookies Plan ran on as Rosmult Jet tired, but Patrick Clancy’s charge had enough done to secure a first victory.

The other heat winners were Karlow James and Manners Legend, while in the staying stake victory went the way of Group Rebel and Garryglass Zara.

The opening 525 saw Shercos Electric start best. The pace setter was three lengths clear of Shush Caitlin at the second bend. The lead was gone by the third turn as Deckos Kitty flew into contention.

Deckos Kitty kept on going to win in 30.24, as Nametab Twista came through for second.

Sedgie, trained by Paul Hennessy, was the trap to line winner of the second race. Cheered on as soon as she hit the ground, Sedgie showed nice early to take control.

Despite running a little wide at the first, Sedgie dominated down the back straight. Sedgie galloped all the way home to defeated Barro Bonnie in 29.71.

Self Help showed first in the novice race. Showing nicely early, Self Help skipped four lengths clear of Neon Pirate into the back stretch. Flomur Joey showed pace into the third turn to move within two lengths of the leader.

On the run home Flomur Joy picked off the tiring Self Help. Flomur Joey raced away to defeat Kilara Beauty in 29.93.

The fourth race saw Slippersforwooly lead up on the outer. He went around the first two bends in front, ahead of Chums Fiver and Drakelands Gift.

The opening semi-final of the Betting On The Tote a4 Novice 725 saw Pookies Marylou pop out of trap 1 and lead early. Feed Me Bounty took it up into the first bend and built a four length lead.

The lead was cut and approaching the second last Feed Me Bounty was all out. Pookies Marylou hit for home. Group Rebel went after the leader and wore down Pookies Marylou to score in 41.63.

The second semi saw Cottonwool Baby start best. The Baby was still in front at the third bend, two lengths ahead of Garryglass Zara.

The seventh race was a mad scatter to the first bend. Baileys Star showed best on the rails to lead around the opening turn. That was the place to be as none of the challengers are known for their finishing prowess.

Brazilian Ditch tried to get to Baileys Star, but the front runner took the spoils in 29.72.

The opening heat of the Mister Bates a3 stake saw Manners Legend lead up on the rails. Raggletaggle Rex was second but found himself under pressure into the third.

Manners Legend cut off Raggletaggle Rex at the second last and went on again. The field closed up in the latter stages and in a blanket finish Manners Legend hung on to defeat Olympic Money by a short head in 29.69. Another head back was Mt Leinster Jack.

In heat two, from a level start, Fiancee Alsation got the bend on the rails before slipping three lengths clear of Mt Leinster Ash at the second bend.

In a thrilling finish Karlow James defeated Fiancee Alsation by a half a length in 29.51.