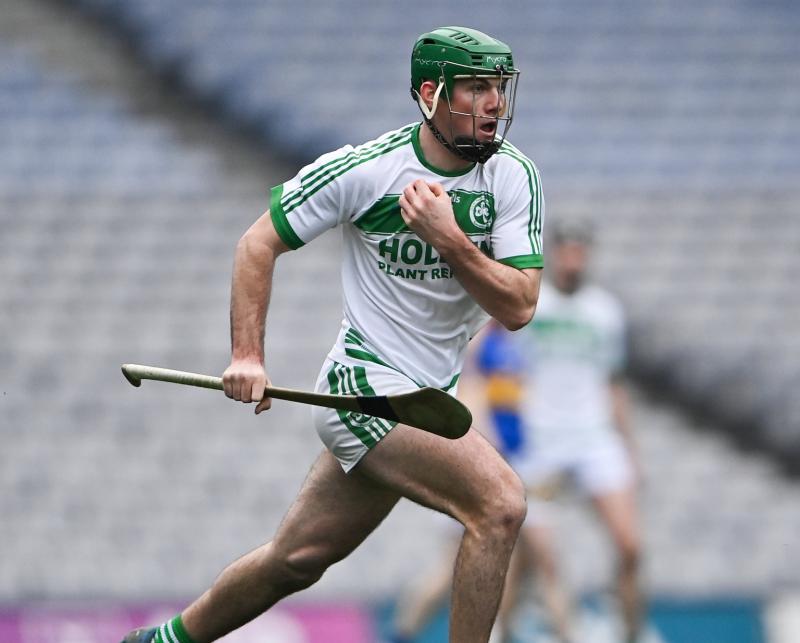 A late rally from Shamrocks Ballyhale saw them overcome Thomastown in a competitive J.J. Kavanagh & Sons Under 21 A Semi-Final (2021) in Thomastown on Saturday afternoon.

The home side led 2-9 to 0-12 with five minutes remaining of normal time, but for the rest of the game, which included six additional minutes, the winners got on top to edge the result by two points.

The never-say-die attitude from Shamrocks Ballyhale, who had to line out without three of their starting side due to Covid, was rewarded with a goal and three points in the closing stages. While it took a great team effort to win the game, the leadership shown by senior stars Eoin Cody and Darragh Corcoran was crucial. That duo either scored or set-up that late 1-3 scoring burst.

Thomastown had every reason to be crestfallen at the final whistle. Aside from the opening and closing five minutes periods in the game, they were the better team, but could never shake off dogged opponents. A wides tally of fourteen did not help their cause and with better composure some of these efforts would have resulted in points.

Shamrocks Ballyhale were more economical close to goal in the early stages with a brace of points from Chris Coady and another from an Eoin Cody free.

Sustained pressure from the home side saw them grab a goal on nine minutes when the alert Jack Holden finished to the net after Shamrocks Ballyhale goalie Dean Mason failed to control the ball, although he may have been impeded by the low sun.

That score saw the home side play with a lot more confidence as Peter McDonald added a brace of points. Despite enjoying less possession, the winners were always on the coattails of their opponents with points from Eoin Cody (free) and Stephen Barron leaving Thomastown ahead by just a point at the first water-break.

Three minutes into the second quarter Thomastown grabbed their second goal from Peter McDonald. Smart thinking by the midfielder saw him initially tap a quick twenty metre free to Jack Holden. The full-forward returned the ball at pace to his colleague who flashed the sliothar to the net. While the winners responded with three points from Eoin Cody, Thomastown held a deserved 2-5 to 0-7 interval lead.

With the breeze strengthening in the second half, four points was a catchable margin for the winners.

Peter McDonald pointed a free on the resumption to push the margin out to five points. Thomastown were now on top, but not for long.

Two brilliant points from sixty metres from Eoin Cody, when he was set up on both occasions by Darragh Corcoran, brought the winners right back into the game. Cody scored another point from a free four minutes later to leave two points between the sides.

Stephen Donnelly, who was playing well in attack for Thomastown, got a badly needed point for his team on forty minutes to halt the Shamrocks Ballyhale momentum, but he needed more assistance from his attacking colleagues.

Despite enjoying less possession, the winners were keeping in touch with the home side, but were heavily dependent on Eoin Cody for scores, with the Kilkenny senior player raising four white flags in the third quarter.

It was still all to play for when Finnian Shefflin (SBH) and Jack Holden (TH) swapped points, but Thomastown still looked to be in the stronger position entering the closing stages.

A crucial moment in the second half saw referee Gay Rafter reverse a decision to award the home side a forty-metre free after the linesman informed him that a Thomastown player had touched the ball with his hand on the ground.

Shamrocks Ballyhale threw caution to the wind in the closing stages. Darragh Corcoran pushed up the field and his goal in injury time following good inter-play with Eoin Cody was the game’s decisive score.

Corcoran had earlier broken from defence to land a point.

Stephen Donnelly brought the margin back to a single point on sixty-three minutes as extra time loomed. That prospect evaporated when Darragh Corcoran played a deft pass to Eoin Cody who pointed from out the field for the final score of the game.