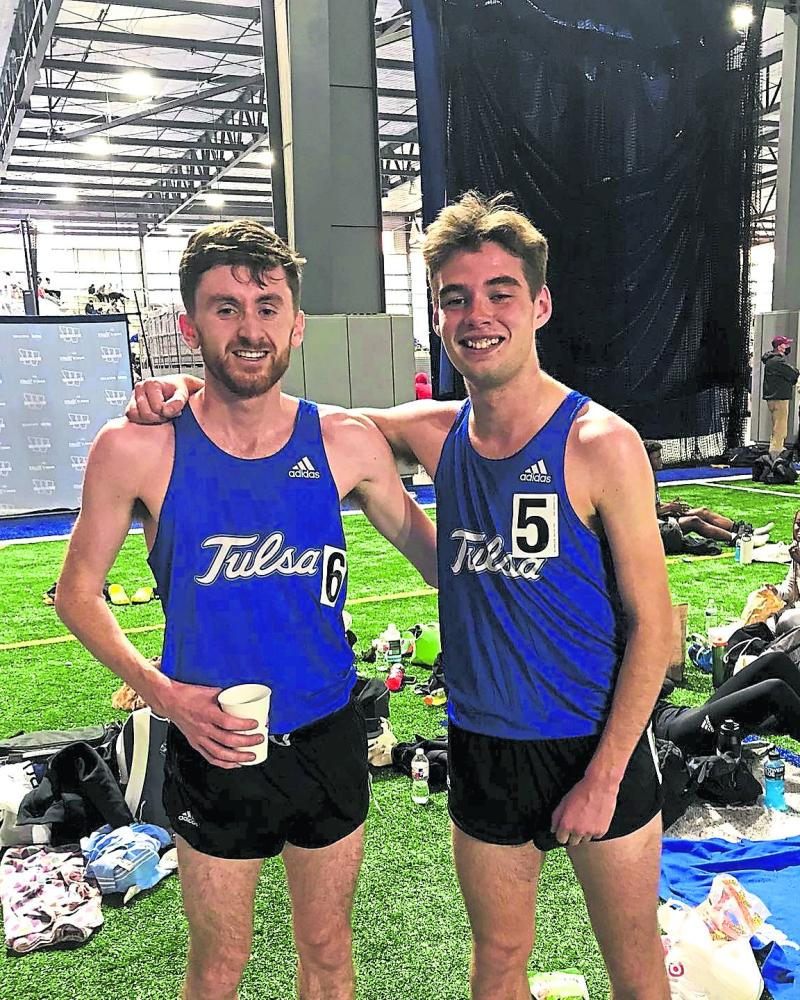 Peter Lynch and Shay McEvoy starred for Tulsa in the US

The athletics focus moved from cross-country to indoors and from juveniles and intermediate to universities and masters last weekend.

The Irish University Indoor All-Irelands were held in Athlone last Saturday while the same venue hosted the All-Ireland Masters Indoors on Sunday. Meanwhile there was more indoor action from Kilkenny athletes in the USA.

The annual meeting of the Kilkenny Athletics County Board, the county’s main administrative event of the year, was held over Zoom on Friday. The committee will be tasked with running all the usual county athletics fixtures for the coming year.

Kilkenny had two winners in the Irish University Indoors, a good return from their four athletes who were in action.
Sophie Jackman (St Senan’s) finished third in the women’s 800m while Shane Power (St Joseph’s) was second in the pole vault.

Indoor running is strategic. With the rise of the track at the bends and the narrow flat at the inner edge of lane one, it is imperative for athletes to get out in front from the start. An athlete in lane one has to be careful on the break in 800m races, that they do not fall victim to being boxed in by the athletes merging from the outer lanes, running downhill from the top of the bend. Gaining control up front means at athlete can dictate the race to suit their speed or endurance strengths.

Those whose main strength is endurance-based may decide to take the race out fast in the hope of burning those explosive athletes early on, ensuring no burst of speed comes from them at the end.

Those athletes who have that explosive speed, may conversely try to ensure the first few laps are slow, so they can wind up their speed towards the end and come storming home for the final 100m. Either way, control of the race with some early front running can be vital to the final race outcome.

Strategy, rather than fast times, is typical of championship running at this level, where the podium place matters more than the actual race time itself.

There was typical championship style running in the women’s and men’s middle distance races throughout the day.

Starting laps were slow, leading to a competitive wind up where the speedier athletes have an advantage. Sophie Jackman, competing for Trinity College, easily qualified for the 800m final. With just one hour between the heats and finals, recovery was vital. She was drawn in lane one for the final and had to be content with being in the middle of the pack for the first 400 metres.

The first 200m was pedestrian – 40 seconds. Several athletes, including Sophie, tried to pass on the home straight – even running as wide in lane, but Lucy Barrett (UCD) was controlling the place along with DCU’s Sinead Gaffney.

The final 200m proved to be very fast, with Sophie now moving into third position, gaining on Sara Lane (DCU) and athlete she is used to competing against.

Both athletes held off a late challenge from Sinead Gaffney who, despite being passed with 200m to go, managed to find another gear. Up front DCU athlete Eilish Conway won with Sophie and Sara so close at the finish – Sophie missing out on the second spot by one-hundredth of a second.

Her third place medal is a first university track and field indoor medals for St Senan’s.

Shane Power (St Joseph’s) did what Shane Power always loves to do – shine at the pole vault. In typical Power fashion he passed on the first number of jumps, coming into the competition at 4m 20cm - something you can do, when you are a seasoned competitor.

The DCU athlete, now in his final year of eligibility for the IUAA Indoors, cleared 4.20 on his second attempt and decided to pass at 4.30 allowing him to take on 4.40m. A slight injury was the reason for this.

While the decision meant there was less pressure on the injury, Shane was up against fellow DCU competitor Matthew Callinan Keenan. He was having a superb day and vaulted to a new Irish University Indoor record of 4.72m.

Also competing for DCU Jordan Knight (St Joseph’s) finished seventh in the 60m hurdles final and was 10th in the long jump with a best of 5.81cm.

David Murphy (Gowran) was competing for IT Carlow. After a good heat, where he finished second to Israel Olatunde (who recently set a 60m indoor record) he finished seventh in the final, clocking 6.93.

Fellow IT Carlow student Molly Scott set a new Irish senior record in her 60m. In doing so she qualified for the world indoors.
News from the USA

At the Washbourne Open in Topeka, Kansas Kilkenny City Harriers (KCH) duo Shay McEvoy and Peter Lynch (KCH) were competing for the University of Tulsa.

A good win as part of the relay squad on Friday set the stage for the individual events on Saturday.

The relay, in question was a distance medley relay and consisted of three Irishmen on the squad - Shay McEvoy, Matthew Beveridge and Peter Lynch along with American Sean Korsmo.

Tulsa finished in 9:52.30, over seven seconds in front of the rest of the field.

This was Peter Lynch’s first 3km in quite a while - nothing like a good head-to-head with your training partner and team mate!

Both men should break the eight-minute barrier before the season is over.

A number of athletes from Kilkenny travelled to the National Masters Indoors in Athlone on Saturday. Between four clubs, a total of 13 medals of all colours came back to the county.

As usual the Kilkenny strengths lay in the throwing events, with nine of the 13 medals coming from the throwing disciplines.

All were won by athletes from Brow Rangers and St Joseph’s.

Throwing talent goes back a long way in Ireland, when the early pioneers of athletics were world class internationals. Kilkenny, it seems, is still steeped in such talent.

After an absence of two years, the numbers were somewhat down on previous occasions, in part is due to the early hosting of the event and also the recent easing of restrictions, with some individuals still not comfortable with crowded environments.

Verena Fenlon (St Joseph’s) was the top performing athlete with a double championship win in both the shot and weight for distance in the over-50 category.

Verena has been involved in athletics since her juvenile cross country days when, as a young Verena Lee, she was part of a very successful cross country team, one of many that the Tullogher- Glenmore club produced over the years.

John Leamy (Gowran) won the over-45 long jump. John has been taking part in masters events for quite a few years, mostly in sprinting events.

Most of these athletes will stay in training for the Leinster Masters, which is in March.