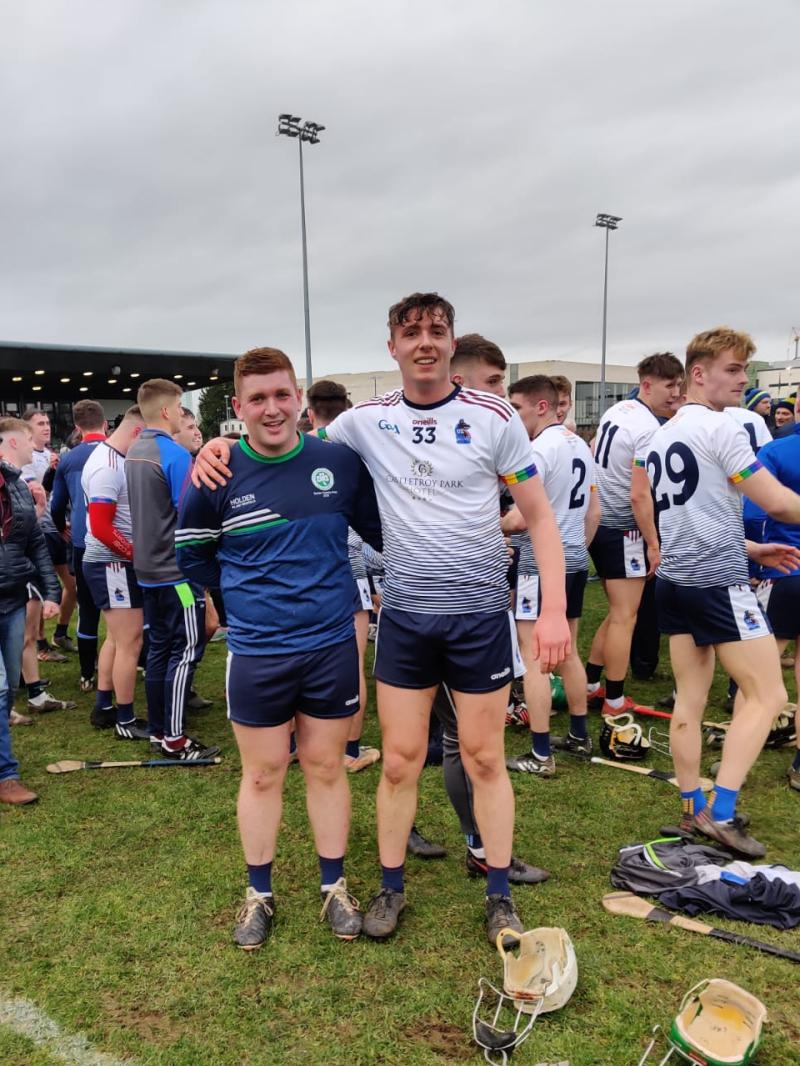 The 2022 edition of the Fitzgibbon Cup came to a close last weekend and once again the third level competition produced a wonderful spectacle.

The final was held in Institute of Technology, Carlow on Saturday and it was University of Limerick who were smiling as they beat National University of Galway on a 1-21 to 2-15 scoreline.

UL were trailing by five points with four minutes of normal time remaining but produced a superb final 1-5 to clinch the win in stunning fashion.

There was also a late red card for NUIG’s Cian Lynch which was a factor in the final outcome.

This was a repeat decider between the colleges after the Sigerson Cup decider, where NUIG were victorious.

But it was UL who emerged as winners at the IT Carlow grounds to deny NUIG a dream double.

Gearoid O’Connor was in superb form for the winners, landing nine points to help UL to glory.

Cian Lynch’s red card had a huge bearing on the game. The Hurler of the Year was dictating proceedings up until his dismissal and his loss allowed UL a route back into the game - and they took full advantage.

Just like in the semi-final win over IT Carlow it was Waterford’s Mikey Kiely who proved to be the ultimate hero as he goaled late on to secure the win. He could be a big asset to Liam Cahill and the Deise over the course of the next few months. 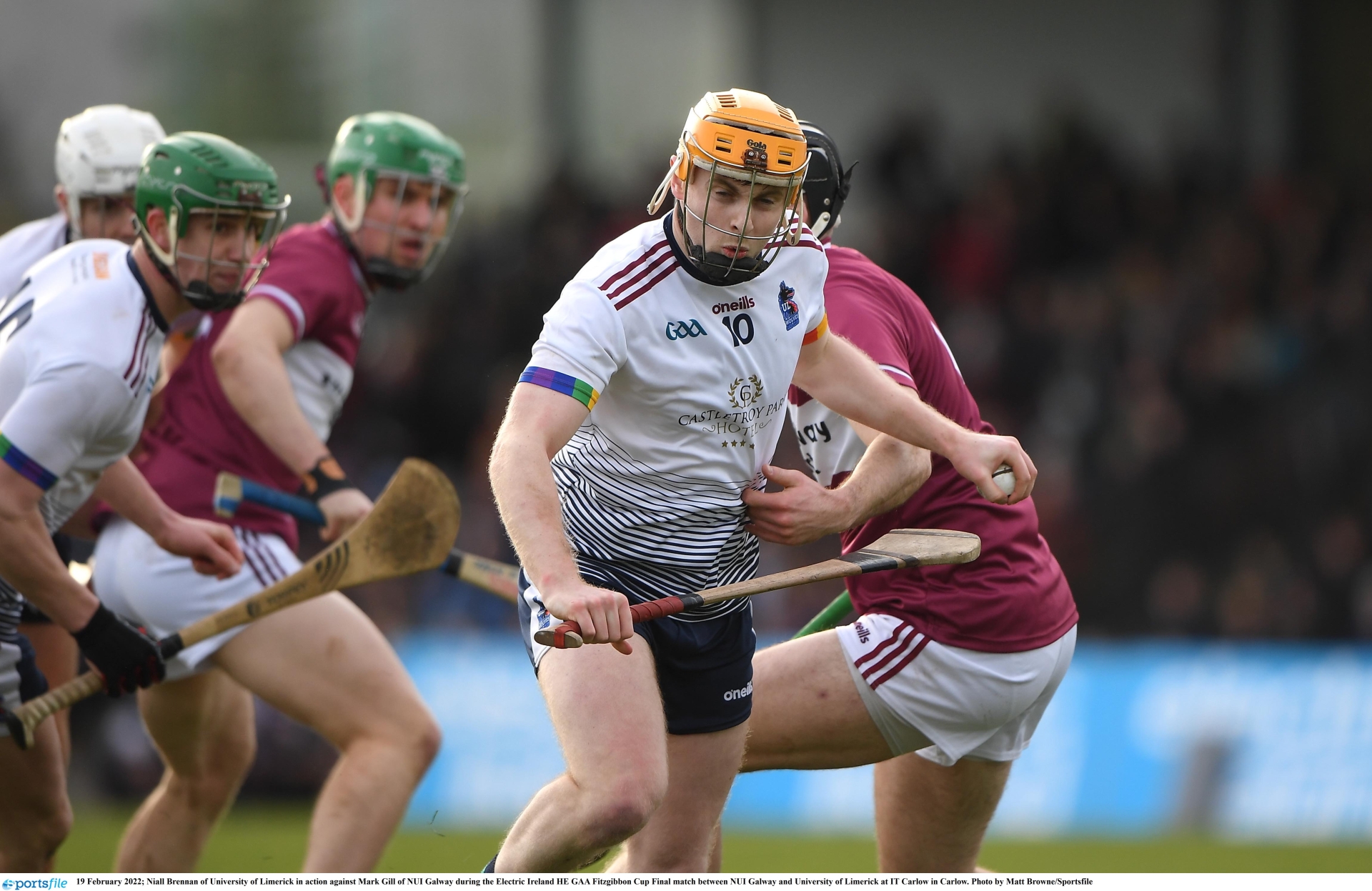 Lisdowney and UL’S Niall Brennan takes control of the ball

With over 50 Kilkenny players involved from the start, it was always likely that at least one player from Noreside would pick up a winners medal and so it proved as Darragh Corcoran (Shamrocks), Dean Mason (Shamrocks) and Niall Brennan (Lisdowney) tasted victory.

All three players started in the final but after Shamrocks of Ballyhale’s extended run in the All-Ireland club championship, both Mason and Corcoran were only available to their college by the semi-final stage.

Corcoran started both games in midfield while Mason sat out the semi-final before debutising for Cork’s Eoin Davis in the decider.

On the other hand Niall Brennan was a mainstay in the half-forward line throughout the competition for the Limerick side.

While the Lisdowney man failed to get on the scoresheet against NUIG, he still came to prominence in the earlier rounds including a very impressive semi-final performance against Carlow where he notched four points from play. 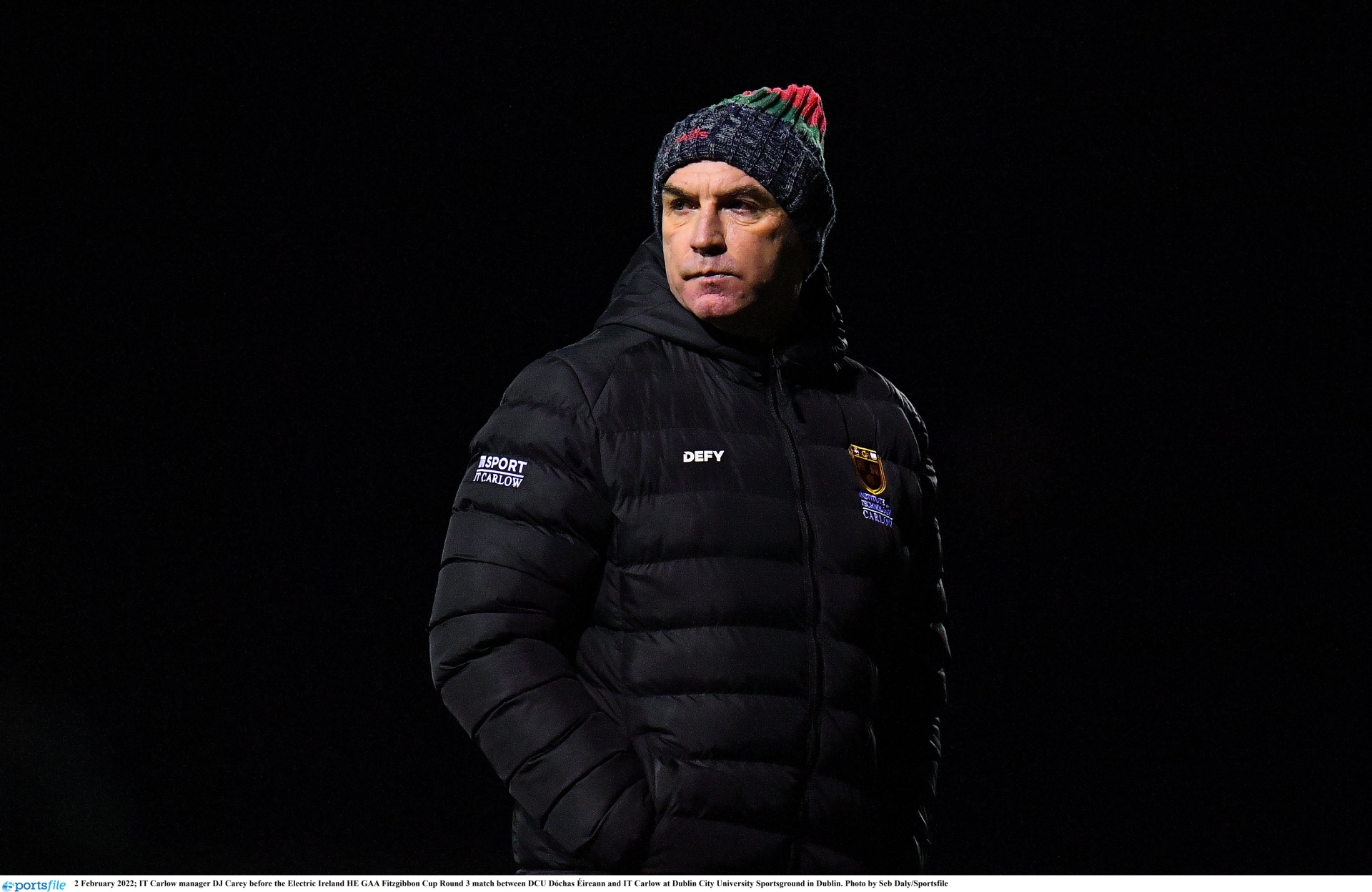 There was plenty of local interest in the semi-final clash between Carlow and UL which was played only two days before the final, as the DJ Carey managed hosts aimed to qualify for a second successive final.

This was the beginning of a dream couple of days for Mikey Kiely.

He hit a free from just outside the 45-yard line and the dipping effort flew through a crowd of bodies and into the IT Carlow net.

The goal arrived in the 81st minute and secured UL’S passage to the final.

Prior to that Carlow goals from Marty Kavanagh and Seamus Casey brought the game to extra-time before the home side appeared to be getting on top until Kiely struck late on.

As well as Carey on the sideline, there was also a number of Kilkenny players involved for Carlow on the pitch with Niall Brassil (James Stephens), Cian Kenny (James Stephens), Jason Cleere (Bennettsbridge) and Eoin Cody (Shamrocks) all taking their place in the starting 15.

Like Dean Mason and Darragh Corcoran, it was Cody’s first game back after the All-Ireland club final. He and his club colleague Corcoran actually marked each other for the majority of the game!

Fellow clubmates and current Kilkenny stars Cian Kenny and Niall Brassil performed well and with Brian Cody in attendance for the latter stages of the competition, the likes of Jason Cleere and Niall Brennan will have been hoping to catch the eye of the Kilkenny boss.

That’s the value of the Fitzgibbon Cup as it gives players the window to impress in a competition that would be classed just below intercounty level with some of the best young talent in the country facing up to each other.

As well as the teams that made the latter stages of the Fitzgibbon Cup, there were also a number of Kilkenny players that took part in the opening stages of the primary third level competition with Mikey Butler, Eoin O’Shea (WIT), Colum Prendiville (UCD, James Bergin and David Blanchfield (DCU) all involved.
It’s been a very busy few weeks for everyone involved in the Fitzgibbon Cup and with player welfare and fixture congestion so topical it’s crucial that the GAA finds a settled home for the competition.

The recent season ending cruciate ligament injury to Mayo and NUIG footballer Tommy Conroy has brought into focus the amount of games that college and county players are undertaking and something may have to be done to protect players around the country.

The condensed league schedule coupled in at the same time as the Fitzgibbon Cup and Sigerson Cups has continuously caused issues for all parties and the time may have come to change things up as the College game is vital in the development of players around the country.