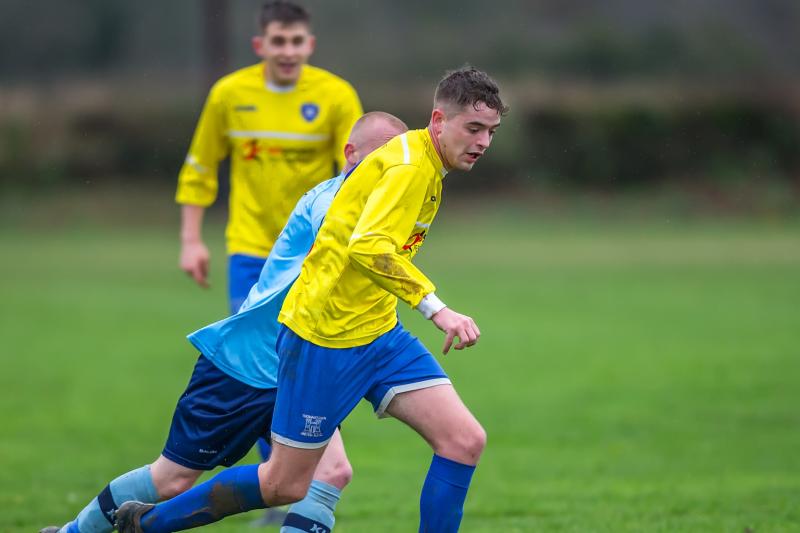 Action from Thomastown United’s Cup game against Kilbarrack, one of the few games to survive the weather. Picture: Mark Desmond

It was a curtailed weekend of soccer action in Kilkenny with the weather playing it’s part in a number of cancellations after all the senior league fixtures were called off.

Luckily there was still a number of LFA O’Neills Junior Cup games on the agenda with Evergreen, Freebooters and Thomastown United all scheduled for knockout ties.

That’s not how it transpired though with Freebooters’ last 16 home tie with Beechwood eventually falling foul of the weather after two inspections at the Fair Green.

The other two games involving Kilkenny sides still went ahead as league leaders Evergreen made the trip to the capital to take on Trinity Donaghmede on Sunday and Thomastown played host to Kilbarrack United.

The Evergreen clash was played in terrible conditions and the signs weren’t good when Trinity Donaghmede took the lead in the opening minutes of the second half.

Evergreen showed their class though to overturn the deficit and they duly ran out 2-1 winners.

Back in Kilkenny, Thomastown United were looking to join Evergreen in the next round.

Like Evergreen, Thomastown were slow out of the traps as Kilbarrack opened the scoring but like the city side there was still a way back into the game when Sean Brennan equalised.

There was no further goals in normal time but there was in extra-time with both sides finding the net on one occasion with Thomastown’s goal arriving courtesy of Casper Konopka.

The game then went to penalty kicks and it was heartbreak for the hosts as Kilbarrack came through to win 5-4.

Attention will turn back to the St Canice’s Credit Union Premier Division this weekend with Thomastown and Freebooters meeting in a bumper clash.